Avery Antonio Bradley Jr. (born November 26, 1990 near Merced , California ) is an American basketball player who has been under contract with the Los Angeles Lakers in the NBA since 2019 .

In his senior year high school in 2009, Bradley was one of the top players in his class. The American college sports television channel ESPNU ranked him number one, Yahoo Sports number four and Scout.com number five.

Bradley attended the University of Texas . He spent part of his childhood in Arlington , where he took part in the Texas Longhorns basketball program and followed the beginning of TJ Ford's career.

In his first season with the Texas Longhorns, he played all 34 games in the starting five and achieved a points average of 11.6 points per game. 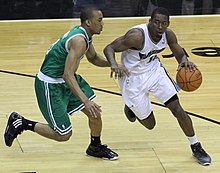 In the 2010 NBA Draft , he was selected 19th by the Boston Celtics. He signed his rookie contract with the Celtics on July 2, 2010. On January 14, 2011, Bradley was posted to the Celtics' farm team , the Maine Red Claws . After a spinal cord injury to his teammate Marquis Daniels , he was back in the Celtics squad from February 7, 2011. In his rookie season, Bradley averaged 1.7 points per game.

During the 2011 NBA lockout , he played three games in Israel at Hapoel Jerusalem . After Ray Allen was injured in the meantime, Bradley got significantly more playing time and rose to become a regular player. He received a lot of praise from all sides, especially for his defensive work. On April 20, 2012, Bradley posted a career high of 28 points in a game against the Atlanta Hawks . Bradley played 64 of 66 games and started in 28. He averaged 7.6 points, 1.8 rebounds and 1.4 assists . In the playoffs Bradley injured his shoulder and missed the start of the new 2012/13 season . He celebrated his comeback on January 2, 2013 in a loss to the Memphis Grizzlies . Despite the early season injury, Bradley was elected to the NBA All-Defensive Second Team for the first time in his career in 2012-13. In the 2013-14 season, Bradley improved his average point yield to almost 15 points. He was able to maintain this average for the next two seasons. For his good performance on the defensive in the 2015/16 season , Bradley was appointed to the NBA All-Defensive First Team .

On January 31, 2018 Bradley was traded to the Los Angeles Clippers together with Tobias Harris , Boban Marjanović and one first and second round pick in exchange for Blake Griffin , Brice Johnson and Willie Reed . After just six games for the Clippers, Bradley dropped out for the remainder of the season due to an athlete bar. After his contract expired in the summer of 2018, Bradley signed a new free agent contract with the Clippers for two years and $ 25 million.

As part of a trade, Bradley was transferred to the Memphis Grizzlies in February 2019 , where he played for the remainder of the 2018/2019 season. After the end of his contract, he joined the Los Angeles Lakers for the 2019/20 season and signed a contract until 2021.