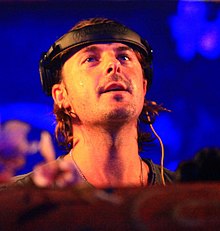 Axwell (* 18th December 1977 ; bourgeois Axel Christofer Hedfors ) is a House - DJ from Lund , Sweden . Together with Sebastian Ingrosso and Steve Angello , Hedfors formed the DJ trio Swedish House Mafia , which disbanded in June 2013. He then formed the Axwell Λ Ingrosso duo with Sebastian Ingrosso in June 2014 , until the Swedish House Mafia celebrated their comeback in March 2018. As a result, Axwell Λ Ingrosso announced that they would be discontinuing their project.

At the age of nine, Axwell was the drummer in his band, which he gave up. Four years later, he bought a computer so that he could play all the instruments himself. Later he met the singer Isabel Fructuoso and landed his first hits under the name Mambana : Libre & Felicidad . Thereupon big names like Roger Sanchez , David Guetta and Junior Jack became aware of him. Axwell has been an integral part of the house scene since the release of Feel the Vibe .

After the Swedish House Mafia dissolved in spring 2013, Axwell founded the Axwell Λ Ingrosso project together with Sebastian Ingrosso in June 2014 .