The Swedish House Mafia is a project by the Swedish DJs Axwell , Steve Angello and Sebastian Ingrosso , which celebrated international success for the first time in 2010 with the single One (Your Name) . After performing together since 2005, the group was officially founded in 2008. With the track Don't You Worry Child they released their last and most successful single in 2012. In 2018 the group celebrated their return at the Ultra Music Festival in Miami . In the meantime, Axwell and Sebastian Ingrosso were also successful in an independent project around the world, see Axwell Λ Ingrosso .

Until 2009: beginnings and founding 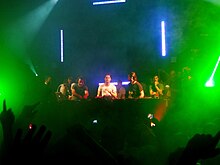 The Swedish House Mafia together with Benny Benassi in 2009

Sebastian Ingrosso and Steve Angello were childhood friends and have worked on joint productions since the late 1990s. The Swedish musician Eric Prydz also occasionally joined the duo. Various appearances as DJs in local clubs followed until they met Axwell , who also owned his own record label "Axtone Records". Due to the increasing popularity and presence as a Swedish DJ quartet, the name Swedish House Mafia established itself among fans and friends .

In 2008, Axwell, Ingrosso and Angello decided to use this name as a pseudonym. Eric Prydz was about to move to London at the time and decided in his own interest to pursue a career as a solo artist. In the previous year they released the title Get Dumb as a trio, still under their own names . The Dutch DJ and producer Laidback Luke assisted them with the production .

By 2009 they made their first names internationally. Angello and Ingrosso celebrated success with a collaboration with David Guetta and a new edition of the song Show Me Love , while Axwell was in the upper half of several European charts with a joint single with Bob Sinclar . Together they released the song Leave the World Behind in June 2009 as a joint single with Laidback Luke and Deborah Cox under Axwell's own label Axtone Records . Here, too, they still used their solo names and celebrated their first smaller hit.

In 2010 he signed a record deal with Polydor Records , a subsidiary of Universal Music .

In early June 2010 they released the song One as a single, which premiered on the radio earlier in the year. The instrumental track quickly became a success, which was followed by a release as a vocal version. This was created in collaboration with the American musician Pharrell Williams and was able to contribute significantly to the success. In Romania, Great Britain and Poland, among others, they achieved top 10 placements. One (Your Name) became their first number 1 single in the Netherlands and was also in the top 3 in Belgium (Flanders). The vocals were recorded in Australia last year and were originally supposed to be on a different track, but according to Angello they went better with One than with any other recording.

Their next single, Miami 2 Ibiza, followed on October 1, 2010 . Here seemed Tinie Tempah as voice. This can also be seen in the official music video and accompanied the trio during performances at MTV and concerts in New York, among others. Like its predecessor, Miami 2 Ibiza also became an international hit. It reached 4th place in the United Kingdom, 10th in Sweden and 19th in Switzerland. they also received several record awards.

The trio's first studio album entitled Until One was released on October 22, 2010 . In addition to the three Swedish House Mafia singles, this also contained a number of solo productions by the band members as well as remixes produced by them. With a placement in the US album charts, they achieved their first placement on the Billboard charts.

On November 29, 2010, the Swedish House Mafia released their first DVD documentary film entitled Take One . The film was shot over the course of 2 years and includes 253 gigs in 15 countries. The Swedish director Christian Larson acted as the director . Commenting on Take One , he said, “It doesn't seem like it's told at all. It's sequences of them and it's wrapped up as a story. It's all in chronological order. I just follow them around and they become characters in their own movie. It all happened naturally because they are all such strong characters, all three ”. The documentary begins with the three members in the studio with Laidback Luke working on Leave the World Behind and ends at the Ultra Music Festival in 2010, amid the premiere of their hit One .

Ingrosso, Axwell and Angello in Ibiza 2011

In April 2011, British radio DJ Pete Tong presented her upcoming release Save the World on his radio show on BBC Radio 1 . In May 2011 the song was released as a single. The song was created in collaboration with songwriters Michel Zitron, Vincent Pontare and John Martin . The latter also contributed the vocals. The piece became a top ten hit in many countries and is her second number one hit in the US dance charts. At the 2012 Grammy Awards , Save the World was awarded a Grammy in the category “ Best Dance Recording “Nominated. The official music video in which dogs save the world (based on the song title of the same name) also attracted a lot of attention and positive reviews. The track acts as the first release of their upcoming second studio album.

On December 16, 2011, the trio released the single Antidote . This was created in collaboration with the Australian dub house duo Knife Party and the American hip-hop musician Adam Baptiste. Antidote was particularly successful in the UK, where it reached number 4 and was awarded a silver record. In the first week alone, they sold around 47,000 units in the UK. The track also achieved high chart positions in Scotland and Finland.

Greyhound followed on March 15, 2012 as the next single. The electro house track reached number 6 in Sweden and number 13 in the UK. The single also made it into the top 100 in Germany, Austria and Switzerland. The official music video serves as a promotional film for the current Absolut Vodka campaign.

In January 2012 the group received the European Border Breakers Award (EBBA) for their studio album Until One from the previous year.

On June 24th, 2012 the trio announced on their website that the last concert of their 2012 tour would be their last: “Today we want to inform you that our upcoming tour will be our last. We want to thank each and every one of you who accompanied us on our journey. We came, we raved, we loved. ”At the same time, they announced three first concert dates. The date of the last gig should be announced in August. In an interview with Rolling Stone magazine regarding the group's breakup, Angello said they decided they'd reached a point where they didn't know what the next step would be. They would have achieved their dreams and far more and would have come very, very far. Angello also said that he would also like to focus on developing his own record label, Size Records.

On September 14, 2012, their final single Don't You Worry Child was released. Here they worked again with the singer-songwriter John Martin. The song became a worldwide hit, selling over five million copies, including three million in the US and over a million in the UK. In Great Britain, Australia, Scotland and Sweden they reached the top of the charts, while in 26 other countries a place in the top 10 was achieved. The official music video shows several reports of their breakup, behind-the-scenes moments and their joint appearance at the National Bowl in Milton Keynes , where the song was presented live for the first time. As in the previous year Save the World , Don't You Worry Child was awarded a Grammy in 2013 in the category “Best Dance Recording”.

After the four releases, their studio album Until Now was finally released . The album was released on October 22, 2012, exactly two years after their debut album. In addition to the singles Save the World , Antidote , Greyhound and Don't You Worry Child, there are collaborations between the individual band members, mash-ups , productions and remixes by the Swedish House Mafia. The album reached top 20 positions in numerous countries across Europe, North America and Oceania, including number three in Sweden. 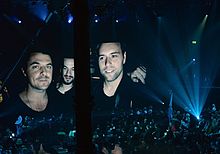 The Swedish House Mafia at the 2013 Grammis Awards

After the Swedish House Mafia announced the entire schedule for their farewell tour, entitled “One Last Tour” on September 24, 2012, it was opened in November 2012. A performance was scheduled to end in March 2013. Concerts were held worldwide for the first time, including first joint appearances in Russia, India and South Africa. The tickets were sold out within a few minutes and further shows were added due to the high demand. In November 2012 the trio performed for three nights in the “Friends Arena” in Stockholm in front of over 100,000 people. They completed their tour at the Ultra Music Festival 2013 in Miami . On Friday, March 15, 2013, they opened the festival as an opening act and closed it on the last night on Sunday, March 24, 2013 as a closing track with the phrase “We came, we raved, we loved” . This appeared on the screen and became the mantra of the whole tour. During their performance, John Martin stepped aside to present the songs he sang Save the World and Don't You Worry Child and in this way to say goodbye to them. His contribution to the set resulted in the entire crowd singing along in what Billboard magazine described as "a powerful ending to the three DJ juggernauts ".

The musical documentary Swedish House Mafia: Leave the World Behind was released on March 28, 2014 . The documentary tells about the decision of Axwell, Steve Angello and Sebastian Ingrosso to break up the Swedish House Mafia and about their last tour. On April 15, 2014, the live album One Last Tour: A Live Soundtrack was released , which contains a 90-minute live recording of their penultimate show at the Masquerade Motel in Los Angeles in front of 70,000 spectators. In June 2014, Axwell and Sebastian Ingrosso founded the music project Axwell Λ Ingrosso . 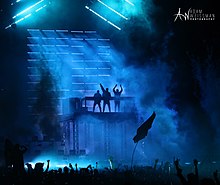 The project during their reunion at Ultra 2018

On March 25, 2018, after numerous speculations, the German edition of DJ Mag announced 24 hours before the opening that the Swedish House Mafia would perform at Ultra Miami 2018. The 2018 edition marked the festival's 20th anniversary and the fifth year since the group split up at Ultra Miami 2013. The set began after a 30-minute break in production with the song Miami 2 Ibiza as an intro. Axwell announced: "My name is Axwell, this is Sebastian Ingrosso, and this is Steve Angello, and Miami, you know that we are the Swedish House Mafia." The set consisted of common titles and songs old and new from the individual projects. The songs Save the World and Don't You Worry Child marked two significant moments as the harmony between the song and the audience almost resembled that of their 2013 performance. The set ended with an encore of One (Your Name) as a mash-up with Dream Bigger until Axwell finished the show with the following words:

After the former manager of the Swedish House Mafia, Amy Thomson, stated that the group would continue to perform together, several concerts for the year 2019 were announced on their website. Together they embarked on a tour in 2019 with performances all over the world. Several new songs premiered in the course of the year, but there was no single release. Furthermore, a number of gigs were canceled in the summer of 2019. This, coupled with the lack of a comeback single, has been called a failure or a disaster by several magazines. In November 2019, the members deleted both the content of their private and their shared network profiles.