The Baltic Lloyd (English: Baltic Lloyd), the Stettin-Amerikanische Dampfschiffahrts-Actien-Gesellschaft , was a German shipping company for the combined passenger and cargo shipping. The company was founded in 1870 by merchants from Szczecin and was supposed to take part in the competition for the transport of emigrants on the North Atlantic route. At times it had five steamships, but for economic reasons it had to discontinue regular service in August 1874. After the sale of her ships, she went into liquidation on April 25, 1876 .

History of the company

The company was founded in Stettin in 1870 with a capital of 650,000 Thalers . Co-founders and supervisory boards were u. a. the entrepreneur and zoologist Heinrich Dohrn , the commercial councilor Johannes Quistorp , the businessman Alexander Weylandt (father-in-law of the hygienist Karl Kißkalt ) and the shipowner Carl A. Domcke, who was later also a member of the board of directors at Germanischer Lloyd . The supervisory board also included TR Oswald, whose shipyard built the Lloyd's ships in Sunderland , England .

As early as the end of 1871, the general assembly decided to increase the capital to 2 million thalers in order to be able to increase the number of ships from two to five and thus be prepared for a 14-day sailing rhythm. In this context, the Ostsee-Zeitung and Börsen-Nachrichten of the Baltic Sea in Stettin and other newspapers advertised the Baltic Lloyd by recommending it "as a very promising and very promising company".

In 1872 the majority of the shares in the shipping company belonged to the Berlin group of companies Heinrich Quistorps , Johannes Quistorp's brother. After the company had paid a dividend of 10% in 1871, it suffered losses in 1872 and the following year, which began its economic decline. After another major loss in the first half of 1874, the Lloyd's management took the ships out of service and put them up for sale from August 1874; the overseas traffic from Stettin to York with steamships was thus ended again for the time being. After the sale of the ship at the beginning of 1876, the general assembly finally decided on April 25, 1876 to liquidate the company, whereby the company assumed that it would still be able to make a capital repayment of around 45 - 50% to the shareholders.

The shipping company had already failed after a few years because the calculated freight rates could not be realized despite the satisfactory number of passengers. The agricultural products that were mainly handled in Szczecin were not in great demand in the United States, and petroleum , which was considered an import product, was then usually transported by sailing ships for safety reasons.

Advertisement by Baltic Lloyd in the Hamburgische [n] Börsenhalle on September 7, 1871 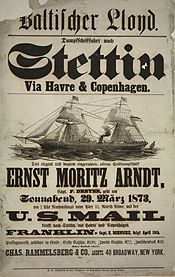 The shipping company operated from Stettin the North American traffic with freight and passengers, especially emigrants, and called New York via Copenhagen and Christianssand or Le Havre . In the autumn of 1873, a joint service from Antwerp to York was agreed with the Belgian White Cross line in order to have a shorter journey. Until then, Le Havre was also the port of departure for the German emigrants transported by Lloyd. It was thus deleted.

The cargo to New York was mainly lead, cement and railroad tracks. Maize, resin, lard, bacon and tallow were shipped in the opposite direction. However, the cargo arriving in the port of Stettin from York amounted to almost double that which was going there. Parcel delivery and cargo acceptance were also offered. Letters to New York "Via Stadt Stettin" cost 2½ silver groschen .

The first two sister ships , Franklin and Humboldt , offered space for a few cabin passengers and around 600 passengers on the tween deck. According to an advertisement of the shipping company in the Hamburg stock exchange hall of September 7, 1871, the passage with the Franklin cost the passage with the Franklin on September 26, 1871 at noon under Captain F. Dreyer and on October 24 at noon with the Humboldt under Captain P. Barandon left, a cabin 100 thalers Prussian courant, in the intermediate deck 55 thalers with food. As can also be seen from the American advertising posters of the shipping company, English and German-speaking passengers were addressed for the crossing back to Stettin. Former emigrants who wanted to visit their homeland or returning failed emigrants come into consideration. The passage prices to Europe were then in 1873 on the Ernst Moritz Arndt for a cabin of the 1st class at 100  $ , which corresponds to about 4000  € , the 2nd class at 72 and for the intermediate deck still at 30 $. However, in 1871 the shipping company was praised by the New Yorker Handelszeitung for its comparatively comfortable tween decks, which with their chambers for 8 to 16 people allowed separate accommodation for men and women or even entire families of emigrants.

The ships of the company ran in the northeastern English shipyard TR Oswald & Co. in Sunderland from the stack . They were all designed as two masted steamships with additional sails in an iron construction. They were each driven by a ship's propeller and had white funnels with a black tip as a shipping company identification . All maiden voyages led from Stettin to New York.

Only fragmentary information is available about the captains of the ships. From the advertising posters shown for a ship passage go as captains F. Dreyer ( Ernst Moritz Arndt , 1873), who had steered emigrant ships in the service of the North German Lloyd in 1868 and 1869 and was released there after a shipwreck with the Union , and E. Dehnicke ( Franklin , 1873). The Humboldt was piloted by Captain P. Barandon in 1871 and the Ernst Moritz Arndt on July 3, 1873 from Stettin by Captain Felberg. The pioneer of German northern and polar tourism, Wilhelm Bade , was also a ship's captain for Lloyd, but probably only in the feeder traffic with the steamship Der Kaiser between Stettin and Swinoujscie . 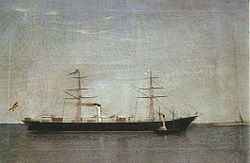 The Humboldt's first voyage for the shipping company lasted from June 27, departure from Stettin via Copenhagen and Christianssand , to July 16, 1871, when it arrived in New York with freight and 655 passengers. In February 1872 the Humboldt first called the ports of London and Le Havre, through which the routes of all Lloyd's ships were initially run. On July 9, 1874, the Humboldt set off from Stettin for the company's last trip and reached New York on August 3, after a stopover in Antwerp. The return journey began on August 13th. After that, Baltic Lloyd ceased its ship passages. The ship completed a total of 15 passages for Lloyd. It went to Raffaele Rubattino in 1874 .

From Stettin to New York via Copenhagen, the first voyage of the Humboldt's sister ship took place on August 8, 1871 , after it had been completed in June 1871. It was in the service of Lloyds until 1874 before it was also sold to Raffaele Rubattino in Genoa and then renamed Batavia . It then went to the Navigazione generale Italiana in 1881.

The ship, which was only procured in September 1872, ran aground on the return voyage from New York to Stettin on April 4, 1874 on the southwest coast of Sweden , near the island of Hallands Väderö , after having moved 50 miles from the official course; There were no human lives to be mourned. The Thorwaldsen was then scrapped at Torekov .

The ship left London on February 27, 1873 on her maiden voyage, which led via Le Havre to New York. The name was given in connection with the veneration of Arndt, who died in 1860, by Heinrich Quistorp, who was related by marriage to him, and whose group of companies included the Baltic Lloyd when the ship was commissioned. On October 16, 1873, the Ernst Moritz Arndt set sail for the first time via Antwerp, while Le Havre had been canceled at the same time. In total, she traveled the transatlantic route 6 times, the last time from Stettin on May 28, 1874. In 1875 she was sold to Alicante in Spain, to López & López, where she then served as Habana .

After being launched in May 1873, the maiden voyage, which began on July 31, 1873, led from Stettin via Le Havre to New York. Her fourth and last voyage for Baltic Lloyd began on May 28, 1874 in Stettin and led via Copenhagen and Antwerp to New York again, before it was also sold to López y Compañía in 1875 and renamed Ciudad Condal .

In addition to the 5 ships owned by the shipping company, the shipping company evidently chartered other ships from time to time in order to be able to transport the number of emigrants. A trip of the SS Bladworth from Christiansand (May 18, 1872) to New York (June 4, 1872) and the Jason SS also from Christiansand (June 13, 1872) to New York are proven.

In October 1871 the Hamburgische Börsenhalle reported on a tragic incident on the Franklin that caused a sensation. On the crossing to New York in November 1871, the steamer got into bad weather, so that almost all passengers became seasick . In addition, several children fell ill with cholera , some of which died after a short time. Of around 160 passengers suffering from cholera, 41 died, including 20 children under the age of twelve. The Franklin , which was just able to reach Halifax for a stopover after a 24-day storm voyage, to fill up its bunkers , had to be thoroughly disinfected in the destination port of New York . Rudolf Virchow was even brought in to investigate the cause .

In the 1920s, a branch of North German Lloyd also operated under the name "Baltischer Lloyd" ( Latvian : Baltijas Lloids) in Riga, Kaufstr. 22. It was structured as a legally independent public limited company. For 1935, a travel agency under this name is also recorded for Riga and additionally Liepāja .