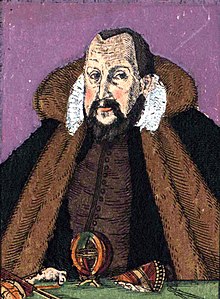 Bartholomäus Scultetus ( Latinized from Schultheiß or Schultze (s) ; other German forms of name: Barthel Schulze or Schulte (s); * May 14, 1540 in Görlitz ; †  June 21, 1614 ibid) was city ​​judge and mayor of Görlitz. He was also an excellent mathematician, astronomer, chronicler and historiographer.

Scultetus came from a family that had made a living in agriculture for generations. His great-grandfather Nicolaus Schulze worked as a farmer in the town of Leopoldsheim near Görlitz. His son Michael Schulz, Scultetu's grandfather, bought the Vorwerk am Rabenberge in Görlitz on May 19, 1500. The father of Scultetus, Martin Scholz (* 1467, † March 1, 1558 in Görlitz) probably comes from his marriage to Margarethe Seifert. As the eldest son, he took over the father's property and married a farmer's daughter from Mois near Görlitz with the name Ursula Eichler († 1564 in Görlitz). Several children emerged from the marriage, including the sons Zacharias Scultetus (* 1530 in Görlitz; † February 21, 1560 ibid.) And Abraham Schulz (* 1537; † 1571 in Görlitz). In 1540 their youngest son Mattheus Bartholomäus was born. In Görlitz he began his first training at the local Latin school there. This training was supported by the instruction of his brother Zacharias, who built the Görlitz Ratsapotheke and from whom the sundial installed there in 1550 comes. This seems to have awakened Barthel's interest in mathematics and astronomy at an early stage. Perhaps he also encouraged him to Latinize his name.

At the age of seventeen Bartholomäus enrolled on September 1, 1557 under the name Bartholomäus Schiltetus at the University of Wittenberg . At the time of his enrollment, the Wittenberg University was mainly influenced by Philipp Melanchthon , who was teaching dialectical logic, ethics and history. In Wittenberg he will surely have completed basic training at the philosophical faculty first. For this purpose, the local pedagogy offered itself, where the young students could on the one hand acquire the knowledge they need to study or, as prospective teachers, also acquire the knowledge to train young people. That institution was then under the direction of Matthäus Blöchinger . He will also have followed the lectures at the philosophical faculty. The training in the seven liberal arts took place at that time by Caspar Cruciger the Younger , who taught the Latin grammar according to Terence; Caspar Peucer taught geography, astronomy and higher mathematics, Sebastian Theodoricus taught lower mathematics, Petrus Vincentius trained rhetoric, Esrom Rüdinger gave lectures on physics, Johannes Bugenhagen the Younger taught the Hebrew language and Veit Winsheim taught the Greek language .

In the winter semester of 1559 Scultetus moved to the University of Leipzig , where he became a student of the mathematician Johannes Hommel . He must have followed lectures in law and medicine here too. In Leipzig he also met the later mathematics professor Valentin Thau and in March 1562 the future astronomer Tycho Brahe . After Hommel's death, Scultetus went back to Wittenberg, where he acquired the academic degree of Master of Philosophy on February 24, 1564 under the deanery of Bartholomäus Schönborn . As a master's degree, he had acquired the right to hold lectures himself. He did this in Wittenberg and later again in Leipzig. However, since he could not find a job in the university, he returned to Görlitz in 1567. On June 5, 1570 he was employed as a teacher of mathematics and astronomy at the Görlitzer Gymnasium Augustum, which he did until September 28, 1584. From 1570 he owned a beer yard on Petersstrasse, which he lived in with his family until his death. As a brewer, he belonged to the top class of the Görlitz citizens, to whom all municipal offices were open.

Scultetus as councilor and mayor

Scultetus served his hometown from 1578, when he became councilor, in various functions. As city treasurer, he was responsible for numerous tasks: the accounting of city taxes, the administration of the city's land and forest holdings, alms-giving and others. In 1589 Scultetus became city judge. During his tenure (until 1593) he processed around 3,900 cases. He was elected mayor of the city six times in his career, the first time in 1592. The first population census was carried out under his government. Previously, only households were recorded. As councilor and mayor, Scultetus was often entrusted with the representation of his city at the convents of the Upper Lusatian six- city union and at the Upper Lusatian state parliament. For Görlitz and the other five cities he also worked as an envoy at the imperial court. From 1587 Scultetus created a book of documents in which he entered all the important privileges and rights of his city.

Several historical works by Scultetus have survived, for example on contemporary history and also one on Görlitz city history up to 1580 in two volumes. During his tenure as city judge and mayor, he kept a diary for many years. The diaries, in which he entered events, but also personal experiences and thoughts, were intended to facilitate his administration. Today they give a detailed picture of the situation in Görlitz at the turn of the 16th and 17th centuries. Since it is a kind of unofficial official diary, little is learned about the personal life of Scultetus outside of his official duties. 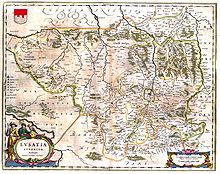 Map of Upper Lusatia, based on a template by Bartholomäus Scultetus

Scultetus was one of the most important cartographers in Central Germany in the 16th century. In 1568 he made a map of the Mark Meissen . Axelle Chassagnette describes this map as "very well designed" from a mathematical point of view compared to other maps. In 1593 he created the first map of Upper Lusatia on behalf of the estates . To this end, he had made numerous trips through the margravate in order to get an idea of ​​the topographical conditions for himself. Scultetus was the first to enter the Sorbian- German language border on his map . In 1578 he even received an offer to work as a cartographer for the Russian court of the tsars.

However, Scultetus achieved its lasting importance as an astronomer and mathematician. He was primarily concerned with methods for more precise time measurement. He was successful in this area both with the installation of sundials and with the introduction of the twelve-part dial on the Görlitz town hall clock. Scultetus was personally acquainted with Tycho Brahe , Johannes Kepler and Valentin Thau . The outstanding achievement of Bartholomäus Scultetus, the effect of which went far beyond Görlitz, was his contribution to the Gregorian calendar reform , which he advocated. The Protestant Scultetus recognized the correctness of the papal efforts with regard to calendar reform at an early stage, and he advocated the introduction of the new calendar to Bohemian state and court officials, while many Protestant princes and scholars rejected this due to religious prejudice. It is not least thanks to Scultetus that the calendar reform was introduced on the orders of Emperor Rudolf II in Upper Lusatia and the other Bohemian countries in 1583 and 1584 respectively.

Bartholomäus Scultetus died on June 21, 1614 as a highly respected man. He was buried in the Nikolaikirche in Görlitz . An epitaph was erected there , but it was lost in the Görlitz town fire in 1717.

Scultetus was married twice. His first marriage was on April 24, 1570 in Görlitz with Agnes Winkler (* ± 1526; † August 5, 1572 in Görlitz), the widow of Johann Thiele (also: Hans Tile, Tiele) and daughter of the book publisher Thomas Winkler († 1546). The short marriage remained childless. After the death of his first wife, he married Helena Röber (* 1558 in Görlitz; † 13 October 1623 in Görlitz), the daughter of Johann (Hans) Röber and Justina NN, in Görlitz on January 26, 1573. The surviving children of the family were on 30 October 1625 Emperor Ferdinand ennobled and led then on the name of Scholz Scholl star. From the children we know: