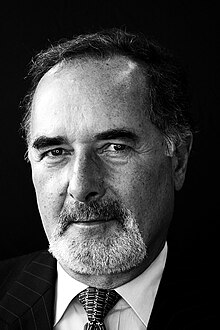 Bernd Pischetsrieder studied mechanical engineering at the Technical University of Munich from 1968 to 1972 and started his first job as a production planner at BMW in 1973. His career at BMW took him to Pretoria in 1982 as Head of Production at BMW South Africa . He stayed here until 1987 and then returned to the corporate headquarters in Munich, where he was appointed to the executive board in 1991 and took over as chairman in 1993. Pischetsrieder became known primarily through the 1994 purchase of the British Rover Group Holdings Ltd. by BMW. However, the takeover did not bring the desired success, so that the brands Rover , MG and Land Rover were sold again. Only the Mini turned out to be a stroke of luck.

At the beginning of 1999 Pischetsrieder had to leave BMW and moved to the Volkswagen Group as Head of Seat . There he took over the post of CEO from Ferdinand Piëch in 2002 .

Pischetsrieder left the board of directors of the Wolfsburg-based car company on December 31, 2006. His successor was the previous chairman of the board of directors of the Volkswagen subsidiary Audi, Martin Winterkorn . Personal differences between Pischetsrieder and Piëch were named as the background for the “termination”. During his tenure, Pischetsrieder had increased the market value of VW AG by 80%, but revised many decisions made by his predecessor Piëch. As a result, Piëch saw the interests of the shareholder Porsche , of which he was a co-owner, increasingly endangered. Pischetsrieder lost his post against the vote of the supervisory board member and Prime Minister of Lower Saxony (who owns 20.00% of VW ordinary shares ) Christian Wulff . Winterkorn's successor was a confidante of Piëch. Pischetsrieder was an employee of Volkswagen AG until 2012.

In June 1995, the McLaren F1 from the BMW fleet, driven by Bernd Pischetsrieder, overturned several times on a country road on Lake Chiemsee. Pischetsrieder, his wife and one other inmate were slightly injured. The circumstances that led to the total loss of the 1.5 million mark car were never known to the public. By concealing the background of the accident, Pischetsrieder drew massive criticism.

Alec Issigonis , the designer of the Mini , is a second uncle of Bernd Pischetsrieder.

Board of Management of BMW AG