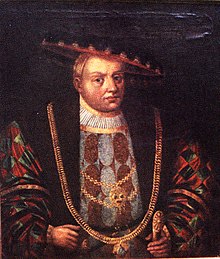 Bogislaw X. with his two wives, from the family tree of the Griffins by Cornelius Krommeny, 1598. 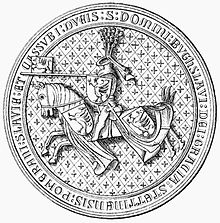 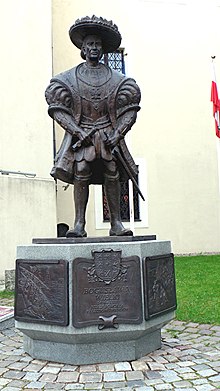 Monument to Bogislaw X in front of the castle in Stolp

His father was Duke Erich II of Pomerania-Wolgast , his mother Sophia the daughter of Duke Bogislaw IX. from Pommern-Wolgast-Stolp. Bogislaw succeeded his father in government in 1474. After the death of his uncle, Wartislaw X. , he also had his rule in 1478. For the first time in 200 years, Pomerania was reunited under one ruler, as the Wolgast dukes Wartislaw X. and Erich II. Had already succeeded in 1464 with Otto III. could assert the extinct Stettin line against Brandenburg claims.

The relationship with Brandenburg, which claimed feudal rule over Pomerania, remained the most important foreign policy problem for Bogislaw X throughout his life. Initially, he refused to give the feudal tribute , for which he found support from King Casimir IV of Poland. Then in 1477 he married Margareta von Brandenburg , the daughter of the Elector of Brandenburg, and in 1479 finally took Pomerania-Stettin as well as Pomerania-Wolgast of Brandenburg as a fief. In 1493, with the Treaty of Pyritz , Bogislaw was able to soften Brandenburg's feudal sovereignty. Feudal tribute was granted to him and his descendants. In return, he had to grant the Hohenzollern rulers in Brandenburg the succession in the event that the Pomeranian ducal house died out.

Through his marriage policy, Bogislaw connected the Greifendynasty with the most important royal houses in northern Germany and with the Danish royal family. He also had good relationships with Duke Georg von Sachsen , who was the godfather of his eldest son Georg .

In 1492 he was involved in the Sternberg host-molester trial , as a result of which 27 Jews were burned at the stake and the rest of them had to leave Mecklenburg . Just like the Mecklenburg dukes, Bogislaw X. also drove the local protective Jews out of his territory.

In 1496 Bogislaw traveled to Innsbruck to see King Maximilian I , who had been invited to a Roman train . Since this did not take place, the duke traveled to Jerusalem via Venice and Padua instead . There he was made Knight of the Holy Sepulcher in 1496 . On the return trip the Pope in Rome gave him the right to occupy the Pomeranian diocese of Cammin and other important benefices in Pomerania. In April 1498 Bogislaw returned to Szczecin. From Italy he brought the lawyers Petrus von Ravenna , who became professor at the University of Greifswald for a few years , and Johannes von Kitscher .

Back home, Bogislaw continued modernizing the state administration. In place of quasi-hereditary bailiffs, there were only officials committed to the duke, many of whom also had a university education. In 1489 a new coinage system was issued. In 1492 he issued a wood regulation in Ueckermünde . During his reign also falls the introduction of Roman law, of which u. a. the Lombard feudal law was part of it. This required written form and so it is not surprising that most of the oldest loan letters of the Pomeranian nobility date from the reign of Bogislaw X. The duke also tried to break the power of the cities, but was less successful in the almost independent Stralsund , the largest city in Pomerania until the 18th century. The duke had the old ducal castles in Wolgast and Stettin expanded into residences that met his requirements for a glamorous court in the style of the early Renaissance in Germany. In Wolgast a city ​​palace was built over the next few decades , which functioned as the main residence of the Wolgast dukes until 1625, but was later completely destroyed by around 1820.

In 1517 Bogislaw commissioned Johannes Bugenhagen , who was then active in the Belbuck monastery and later became the most important reformer of Pomerania, to compile a Pomeranian national history. Bugenhagen published this under the title Pomerania 1518 in Latin.

The chroniclers have little good to say about the last years of the Duke's life. He is said to have led a dissolute life and neglected the affairs of government. The recognition of Pomerania as an imperial principality by issuing an imperial loan letter at the Reichstag in Worms (1521) he obtained personally, and was also present two years later at the Nuremberg Reichstag to defend the rights of Pomerania against the Brandenburg claims; Stralsund mayor Nikolaus Smiterlow accompanied him here . He also lived through the beginnings of the Reformation in Pomerania, but remained inactive in this regard.

Bogislaw X. died on October 5, 1523 in Stettin, where he was buried in the Ottenkirche . His sons Georg I and Barnim IX followed him into the government .

Bogislaw was engaged to Anna, daughter of Duke Heinrich IV of Mecklenburg, as early as 1464, but she died that same year.

Bogislaw also had an illegitimate son Christoph (* around 1480; † unknown) who held clerical offices.

Numerous fabulous stories have developed around the life and deeds of Bogislaw X, beginning with the historian Thomas Kantzow (* 1505; † 1542), who reports them as facts. This includes the legend of the farmer Hans Lange , who took care of the young prince who was allegedly neglected by his mother. In particular, Bogislaw's trip to the Holy Land gave rise to fabulous stories, including alleged heroic deeds of the duke in an attack by Turkish pirates. These stories show the interest and admiration of the Pomeranian population for their great duke.