The under Kulturgüterschutz standing ruined castle Schloss Birseck with KGS -No. 1384, also the Birseck ruins or Birseck Castle , is located in the Swiss municipality of Arlesheim in the canton of Basel-Landschaft .

The ruin of the Spornburg lies to the southeast, above the village on a rocky mountain spur , where it towers over the Hermitage . It is a striking landmark of Arlesheim and can be seen from afar. Today Birseck Castle and the Hermitage are easy to reach by tram (line 10, Arlesheim Dorf station).

Birseck Castle is called the lower or front castle and is one of four castles that extend in a north-south direction along the slope of the Birs plane, the Birseck . The upper Birseckburg (castrum birseke superior) is known as Reichenstein Castle , and of the rear and middle castle (castrum medium) only badly crumbled ruins with wall remnants of a round tower have been preserved.

Birseck Castle is protected by steep, rocky terrain on the west, south, north-west and south-east sides. The largest English landscape garden in Switzerland, the Hermitage, is also located in this area . The castle was originally accessed from the northeast, but is now also possible through the Hermitage.

The oldest Neolithic burial in Switzerland was found in the Birseck-Ermitage cave. Between 5400 and 5000 BC A 30- to 40-year-old man was buried here in the supine position with his extremities drawn up. The piled stones at his feet are probably to be interpreted as the remains of a grave border. The grave did not contain any grave goods; the drawn-up extremities of the deceased, however, are reminiscent of the findings on the large ceramic ribbon burial grounds in Central Europe, to which the dating fits.

The castle complex of the front Birseck Castle consists of a core castle , which is in ruins, as well as a weakly fortified outer castle , which still houses a farm with a residential house and used economic buildings. To separate the core and outer bailey, a trench was cut into the rock, which was spanned by a drawbridge . The whole thing is surrounded by an irregularly drawn curtain wall , which has a small tower near the gate.

After the northern part of the enclosure wall partially collapsed in 2000 and other parts of the facility were in danger of collapsing, the first renovation work was carried out in the same year . A second renovation phase followed in 2005, during which an archaeological construction analysis was carried out.

The castle belongs to the Foundation Ermitage Arlesheim and Schloss Birseck .

Birseck Castle has been open to visitors again since 2007. 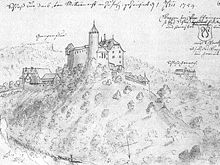 The origins of the castles probably go back to the Counts of Frohburg , who sought expansion into southern Sisgau after the middle of the 12th century . As a countermeasure, Bishop Lüthold of Basel bought the castle hill from the Niedermünster monastery in 1239. In the course of the dispute, the bishop built today's Birseck Castle in 1243/44. In the case of many of the stones found in the oldest preserved masonry, clear traces of fire were found. These give rise to the suspicion that there had been a previous building, which was then completely replaced in building 1243/44 (reusing the usable stones). The reasons for the fire (warm demolition, accident, consequence of the conflict) are unknown.

It was not until 1245 that Ludwig von Frohburg renounced Birseck Castle - and also the neighboring Reichenstein Castle. It was then temporarily used as a residence by the bishops , and in 1270, Bishop Heinrich von Neuchâtel even invited the Pope to the castle. The castle suffered various damage during the Basel earthquake of 1356: Several cracks in today's masonry can be traced back to it. The reddened limestones that were recognizable in the building after this point in time indicate that a fire had caused great damage - possibly as a result of the quake. As the importance of the complex had decreased and the bishops' money was running out, they pledged the castle to the Lords of Ramstein in 1373. In 1435 the pledge was released and the castle was then used by the episcopal bailiffs . In the 15th ( crenellated upper floors) and 17th centuries (larger gate system , heightened living quarters, construction of the chapel ), the castle was further expanded and during the Counter-Reformation it temporarily served as a residence for Bishop Christoph Blarer around 1600. In the middle of the 18th century, a stone bridge replaced the drawbridge, which was certainly maintenance-intensive.

In the 18th century the castle was poorly maintained and could ultimately no longer be used as a representative, stately home. Therefore, in 1763 , Karl von Andlau moved his bailiff's seat from the castle down to the village. However, the operation on the estate continues on a smaller scale, as the year 1776 discovered in 2005 shows over a passage. During the French Revolution in 1793, some parts of the neighboring English garden, the hermitage and the castle buildings were set on fire or destroyed by drunken farmers. In 1794 the Birseck ruins were auctioned off as a national property and exploited as a quarry.

In 1808 Conrad von Andlau , the son of Karl von Andlau, and Canon Heinrich von Ligerz acquired the ruins. The tower and chapel were restored in the transfigured neo-Gothic style that prevailed at the time and are therefore no longer authentic today. In the further course of the restoration work at that time, the knight's hall and crenellated wreaths were also built.

Castles and palaces in the canton of Basel-Country