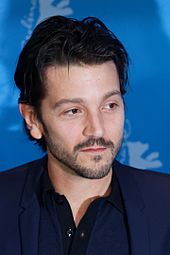 Luna was born the son of the Mexican illuminator and set designer Alejandro Luna and the British actress and costume designer Fiona Alexander .

When he was two years old, his mother died in a car accident. In the same year he stood in front of the camera for the first time. In the 1990s, he made some appearances as an actor in small Mexican film and television productions. His first international success was the feature film Y Tu Mamá También - Lust for Life , for which he and Gael García Bernal won the Marcello Mastroianni Prize at the Venice Film Festival . After a supporting role in Frida , a film adaptation of the life of the Mexican painter Frida Kahlo , he was just as successful with his portrayal of a poor hotel employee in the US film Dirty Dancing 2 , for which he learned to dance, as with supporting roles in Kevin Costner's Open Range - Wide Country and Steven Spielberg's Terminal .

At the 63rd Cannes International Film Festival , Diego Luna presented his directorial debut Abel , the story of a young traumatized boy who believes he is the husband of his single mother.

2016 he starred in the Star Wars - a spin-off Rogue One: A Star Wars story rebel officer Cassian Andor , where he and Felicity Jones was a protagonist in front of the camera.

In 2017 Luna was appointed to the competition jury of the 67th Berlin International Film Festival .