Listen to Druskininkai ? / i (Polish Druskieniki , German until the 18th century Druscheniken ) is a town with 14,764 inhabitants in the municipality of Druskininkai (with 24,861 inhabitants) in Lithuania .

Druskininkai is located in the historic Dzūkija region , around 130 km southwest of the state capital Vilnius and 40 km north of Hrodna ( Belarus ) on the Memel . The health resort is known for its scenic location in the middle of moraine hills in a forest landscape . The Ratnyčia flows through the town .

The city's name comes from the Lithuanian word druska , which means 'salt'. As early as 1794, King Stanislaus August Poniatowski named Druskininkai a sanatorium by decree. In 1837 Tsar Nicholas I made it a city and the first sanatorium for officials of the Russian Empire was built. The Lithuanian composer and painter Mikalojus Konstantinas Čiurlionis (1875–1911) also spent his childhood in the city. 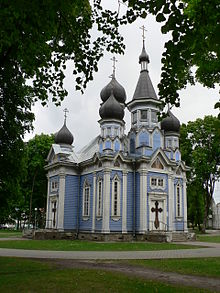 Not far from Druskininkai is Grūtas Park , an open-air museum with dismantled statues and monuments of the Soviet era ( Soviet Lithuania ). Girios aidas is a forest museum and an environmental information center of the Druskininkai Forest District .