The EC Ratingen was an ice hockey club from Ratingen that played in the German Ice Hockey League until 1997 and was then relocated to Oberhausen .

The EC Ratingen "Die Löwen" was founded in 1977 and rose to the then fourth-class regional league for the first time in the 1984/85 season . There the team already qualified in the first season as group first of the western season and as winners of the qualification for the league . The lions remained in this class until 1987 , when the team celebrated their first promotion to the 2nd Bundesliga after narrowly failing in the previous year in qualification north .

There, the EC Ratingen was able to continue playing in the 1990/91 season despite ongoing bankruptcy proceedings and finally made it to the 1st Bundesliga in the following year . After the team had taken second place in the main round, they slipped to sixth place in the intermediate round and thus only just reached the promotion round, which could again be finished as second best. In the relegation games to the first division, the lions finally beat ES Weißwasser in three games.

As one of 18 teams, EC Ratingen was a founding member of the German Ice Hockey League in 1994 , to which the team belonged until 1997 . In the summer of 1997 the first team of the EC Ratingen moved to Oberhausen against the declared will of the club members. There they continued playing in the DEL as Revierlöwen Oberhausen in the Centro arena . After the conditions of participation of the highest league, which stipulated that they still have a club with youth work as a base, were changed, the EC Ratingen finally dissolved, especially since a new ice hockey club, the Ratinger Ice Aliens , had been founded in Ratingen in 1997 . The Revierlöwen finally withdrew from the DEL in 2002 and then played until 2006 . The EC Ratingen association was deleted from the Ratingen association register on August 31, 2006. 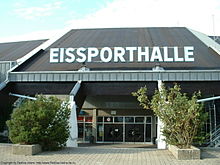 Ice rink at the Sandbach

The EC Ratingen played its home games in the 3800-seat ice rink on Sandbach, which was built in 1981. In 1992 the hall was completely rebuilt and equipped with an additional 1,650 seats and 40 VIP seats. Today the successor club and fourth division Ratinger Ice Aliens plays its home games in the stadium.

(Team membership and position in brackets)