The Revierlöwen Oberhausen are a former professional ice hockey team that was based in the city of Oberhausen . The club was in the tradition of the Ratinger Löwen and was only renamed in the course of the change of location in the summer of 1997 to EC Revier Löwen Oberhausen Eishockey GmbH. The Revierlöwen initially played their home games in the Oberhausen arena before the club had to move to the Emscher-Lippe-Halle in Gelsenkirchen after the bankruptcy .

The move from Ratingen to Oberhausen (1997)

In 1997 the DEL team of EC Ratingen formed the starting point for the EC Revier Löwen Oberhausen Ice Hockey GmbH, which was created after the move to the new Oberhausen arena (at that time the most modern hall in Germany).

The club was originally supposed to continue to run the youth games in Ratingen , while the professional team completed their DEL championship games in the Oberhausen arena, which was made more difficult and later prevented by the establishment of the Ratinger Ice Aliens in the summer of 1997. In the 1997/98 season a regional league amateur team and seven youth teams played under the name EC Ratingen "The Lions". The amateur team managed to qualify for the promotion round this season, but finished last there.

The move to Oberhausen was supposed to save the lions, who got into financial difficulties at the time. In addition, with the arena, the infrastructure and the relatively populous area, a professional starting point was guaranteed. The Revierlöwen were the first German ice hockey team to move to another city - as previously only happened in the National Hockey League . The Munich Barons later followed suit and relocated to Hamburg .

The Revierlöwen Oberhausen played in the German Ice Hockey League for the first time in the 1997/98 season . The team reached thirteenth place and was only able to secure relegation in the subsequent qualifying round. A year later, the club started the season with a loss of around 750,000 euros and remained in the league despite a last place after the main round, as there was no relegation regulation. This was only reintroduced in the 1999/00 season .

In this, the Revierlöwen placed again in the lower half of the table. In the subsequent round of relegation, the team finished sixth and was able to stay in the league one more time. At this point in time, as in previous years, the average attendance fell short of expectations. With only 3095 spectators per game, the 10,500 arena in Oberhausen remained half empty. The team often played in front of fewer than 2000 fans and often set negative DEL records.

The average attendance only increased in the following season, when the Löwen Revier were in sixth place after the main round and were able to move into the play-offs for the first time in their history. There, Oberhausen was eliminated in the first round, in the play-off quarter-finals, against the eventual runner-up Munich Barons with 0: 3 games. With an average of 4,300 spectators per league game, attendance increased by 1,300 compared to the previous season. During a game against the Kölner Haie in December 2000, 9,000 people visited the arena. This was the greatest value in the club's history until then.

At the end of the 2001/02 season there were first organizational and financial problems. Just a few years after the move, the management of the Löwen district fell out with the hall owner. The points of contention were the "excessive rent of the hall", no participation in other income, limited advertising opportunities and the unfavorable possibilities of use, since the hall was mostly occupied by other events on the classic match days (Friday or Sunday). The home games often had to be played on a Tuesday or, in exceptional cases, in another city. Finally, negotiations about a new lease failed.

In the following time, those responsible for the Revierlöwen worked on the plans for a new home ground. Finally there were plans to rebuild the "garden dome" in Oberhausen. This should be converted into a DEL-compatible ice rink. This project was estimated to cost around 12 million euros. Since the game license was granted to the Löwen Oberhausen Revier on condition that proof of a suitable gaming facility was provided, the license withdrawal would inevitably have occurred. Before the deadline, however, both the gaming license and the shares in the DEL Betriebsgesellschaft mbH were sold to Ingolstadt. Of the sales proceeds (in the high six-digit range), however, one third each went to the insolvent mosquitoes from Essen and the Capitals from Berlin. As a result of the cessation of gaming operations, the reduced inflow of sales proceeds and a legal dispute with the tax authorities, an application for insolvency was filed and Revier Löwen GmbH was deleted from the commercial register after it was closed.

↑ ↓ in the promotion or relegation round

The Revierlöwen Oberhausen eV was founded in the summer of 2002 from the Revierlöwen Oberhausen Eishockey GmbH and took part in the regional league NRW from the 2003/04 season . In the first season, the club qualified for the 2004/05 league season . After fulfilling the requirements for the issuing of a license, the territorial lions were divided into the north-east group at the ESBG meeting .

Since then, the home games have been played in the Emscher-Lippe-Halle in Gelsenkirchen , as no separate venue was available in Oberhausen. Under the name Revierlöwen Oberhausen, the teams of the EHC Gelsenkirchen have also been taking part in games since summer 2003 . In 2005 a cooperation with the Iserlohn Roosters from the German Ice Hockey League was agreed. From then on, the Revierlöwen had access to a few Roosters players with a license to play.

After relegation was only possible via the relegation round after the preliminary round of the 2005/06 season and this was not achieved, the Revierlöwen would actually have been relegated to the Regionalliga-NRW. However, it turned out that the fundamental decisions on the division into leagues, which were made by the responsible bodies within the ESBG, were not feasible, so that the GmbH could participate in the 2006/07 season again. However, due to financial outstanding debts, the GmbH was unable to obtain the documents required for the license extension and therefore filed for bankruptcy on May 15, 2006 .

The Revierlöwen Oberhausen club originally intended to continue playing in the Regionalliga-NRW in the 2006/07 season when the ice rink in Oberhausen-Vonderort would be converted for ice hockey games. After the club with its concept for the hall in Oberhausen-Vonderort did not win the contract, a year break was announced for the 2006/07 season and negotiations with the new operator of the hall with the aim of resuming play in the 2007/08 season started in the converted hall.

On April 15, 2007, the club's board announced that no team would be reported for the 2007/08 season. The reason was that a renovation of the hall in Vonderort could not be realized in time due to increasing costs to meet the requirements for ice hockey games.

As a result of the non-start of gaming operations, the club's board of directors was forced to file an application for insolvency proceedings due to the lack of income and the financial burdens that existed at the same time , which the responsible district court in Duisburg rejected on July 24, 2007 for lack of funds has been. The Revierlöwen Oberhausen association was dissolved on December 14, 2007 by resolution of the general meeting.

Members of the Hockey Hall of Fame Germany 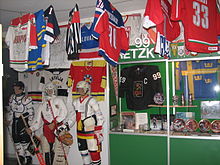 Interior of the German Ice Hockey Museum in Augsburg

Personalities who have rendered outstanding services to ice hockey in Germany will be admitted to the “Hall of Fame” of the German Ice Hockey Museum. Of the actors recorded in Oberhausen:

(Team membership and position in brackets)

Participation of players in the ESBG All-Star Game

The ESBG All-Star Game has been held annually since 2006 and brings together the best players from the 2nd national and upper leagues.

Participation of players in the DEL All-Star-Game

Some players from the Revierlöwen Oberhausen were nominated for the DEL All-Star-Game , a friendly game that has been held annually since 1998 and in which the most outstanding players in the German Ice Hockey League compete against each other.

The multifunctional arena, which was opened in 1996, was the home ground of the Revierlöwen Oberhausen between 1997 and 2002. It is located on a former industrial site and is part of the "Neue Mitte Oberhausen" . At home games of the Revierlöwen the hall could hold up to 10,000 spectators. At the end of the 2001/02 season there was a dispute between those responsible for the Oberhausen ice hockey club and the hall owner. The main focus was on renting the hall and the possible uses. From the point of view of the Revierlöwen management, the hall rent was not appropriate and set too high. In addition, the arena was often blocked by events, so that the home games had to be postponed to other days or played in another city. Ultimately, both parties could not agree on a new lease.

Shortly after the Revierlöwen could not negotiate a new lease for the König-Pilsener-Arena, there were plans for a new home ground in Oberhausen. With the help of some investors, the “garden dome” was to be converted into an ice rink according to the DEL standard. However, the project did not come to fruition.

For the 2003/04 season the Revierlöwen Oberhausen moved to the Emscher-Lippe-Halle in Gelsenkirchen. Since there was no longer a suitable ice rink available in Oberhausen, this step was necessary to keep the club going. The Emscher-Lippe-Halle is located in the Gelsenkirchen district of Erle and is a multi-purpose hall with 2,500 seats or - depending on requirements - standing room for 5,000. It is part of the "sports paradise", consisting of a swimming pool, a bowling alley and the multi-purpose hall. The Revierlöwen, who subsequently also cooperated with the local ice hockey club EHC Gelsenkirchen , played their home games in the Emscher-Lippe-Halle until the end of the 2005/06 league season .