Edwards Pierrepont (born March 4, 1817 in North Haven , Connecticut , †  March 6, 1892 in New York City ) was an American lawyer , diplomat and politician who belonged to the cabinet of US President Ulysses S. Grant as attorney general.

Pierrepont first completed a general education course at Yale University , which he finished in 1837 with a Bachelor of Arts (BA) , and then studied law at New Haven Law School . After the lawyer's approval, he served briefly as a tutor at Yale College and then from 1840 to 1845 as an attorney in Columbus ( Ohio active).

He was then a lawyer in New York before he was appointed judge at the New York Supreme Court from 1857 to 1860 . After retiring from politics, he returned to work as a lawyer in 1877.

During the Civil War in 1862 he was appointed a member of a military commission for the affairs of state prisoners in federal military prisons. During wartime he collected donations and tried to influence the border states between the northern and southern states to remain in the Union . Later he supported despite his previous affiliation with the Democratic Party to the Republican President Abraham Lincoln during its re-election efforts and later the Reconstruction under President Johnson .

In 1867 he was appointed head of investigations against John H. Surratt, who was accused of complicity with the murderer of President Lincoln, John Wilkes Booth , but was ultimately acquitted. In the same year he was a member of the New York Constituent Assembly.

After the Democrats had nominated Horatio Seymour as a candidate for the presidential election in 1868 , Pierrepont left the Democratic Party for good and supported the Republican candidate Ulysses S. Grant. 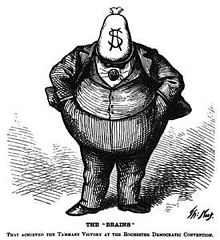 William Tweed in a cartoon by Thomas Nast : "The brains that achieved the Tammany victory at the Rochester Democratic Convention"

After Grant was elected US President, Pierrepont was appointed United States Attorney for the Southern District of New York . He held this office until 1870, after which as a member of the Committee of Seventy against corruption in New York around the party chairman William Tweed in the Tammany Hall , the party seat of the New York Democrats. In 1873 he turned down the president's offer to go to Russia as envoy because, in his opinion, the fight against corruption was not yet over. It was not until 1874 that Tweed was sentenced to twelve years imprisonment for the massive corruption.

On April 26, 1875 Grant appointed him as Attorney General ( Attorney General ) in his cabinet , where he succeeded George H. Williams . During his tenure, due to the efforts of Finance Minister Benjamin H. Bristow , the investigations and charges against the members of the so-called Whiskey Ring took place .

However, after just 13 months, Pierrepont was appointed envoy to Great Britain on May 22, 1876 . In this office remained until December 1, 1877.

In London he dealt intensively with the British financial system. After returning from England, he wrote several papers on the US financial system and the international financial system . Among them was a controversially discussed article in 1887 that called for the conclusion of an international treaty to establish a common currency policy , which was to be based on the silver standard instead of the gold standard that was customary at the time .

In later years he was not only awarded several honorary doctorates from Yale University , Columbia University and Oxford University , but also undertook a research trip to Alaska with his son Edward Willoughby Pierrepont in May 1883 . Upon their return, both wrote a recognized essay entitled From Fifth Avenue to Alaska , for which the son received a guest membership of the Royal Geographical Society of England.