Karl Ludwig Erwin Hasenzahl (born June 19, 1914 in Erbach ; † November 30, 2008 ibid) was a German local politician in Hesse . He was mayor of the city of Michelstadt in the Odenwald for almost two and a half decades . 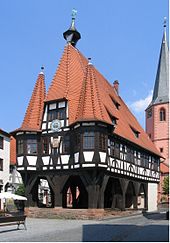 The Michelstädter Rathaus, a high-stand framework from the late Gothic period , restored during Erwin Hasenzahl's time in office and today a tourist eye-catcher in the Michelstädter old town

The Evangelical embossed Erwin Hasenzahl was a skilled purchase and management expert. He married Anna Elisabeth Körber on December 30, 1939 (born May 3, 1915 in Michelstadt, † September 7, 2002 ibid).

Until 2019, his involvement in the time of the National Socialist reign of terror, which only became public with the planned naming of Michelstädter Strasse after him, was relatively unknown. He had been a member of the NSDAP since 1933 and was later classified as an SS-Stabsscharführer according to the Allied rulings as group 1 (main culprit). Only in the appeal proceedings in 1949 on the basis of a pardon in December 1949 was he downgraded to Group 4 for health reasons and released from prison on probation . His involvement in the Nazi era contrasts with his later services as a local politician and mayor.

Hasenzahl was later in the Federal Republic as a candidate of the non-partisan electoral community from 1952 to 1955 first city council and from 1955 to 1979 mayor of the Hessian city of Michelstadt. In August 1956 he initiated the establishment of the non-partisan voter community (ÜWG) in what was then the Erbach district (founding meeting on September 9, 1956), which is still active at the district level as ÜWG Odenwald today.

For decades he shaped the city of Michelstadt and the region. The guiding principles for his work were “Everything for Michelstadt” and “Hear everyone, but don't listen to everyone”. Through and with him, important decisions were made for Michelstadt, which have shaped the cityscape and cultural life up to the present day. During his time, the construction of the B45 bypass road and the inner-city regulation of the Mümling were implemented between 1954 and 1956.

On his initiative, the famous Michelstadt town hall was renovated from 1958 to 1979, the restoration and closure of the city ​​wall was initiated from 1968 to 1978, and the historic old town was renovated from 1967 onwards. All building blocks that formed the basis for Michelstadt to develop into a tourist destination in the Odenwald up to the present day. Related to this is the bees market initiated by Erwin Hasenzahl in 1955 , the second largest folk festival in the Odenwald district . A year later he laid the foundation stone for the city's first modern street lighting .

In 1966, against the decision of the State Association of Jewish Communities in Hesse, he maintained the synagogue (first renovation completed in 1969) and the establishment of the regional rabbi Dr. IE Lichtigfeld Museum, which was opened in 1979 after financial start-up difficulties. The state association remained the owner of the building, while the city took on the maintenance and care of the museum.

It is thanks to him that, after a large fundraising campaign, new church bells for the famous chimes of the Michelstädter Church could be procured to replace the ones melted down in the Second World War .

He paid particular attention to equipping and expanding the Michelstadt volunteer fire brigade , which in 1980 was officially recognized as a base fire brigade of the State of Hesse .

During his time as mayor, the two twinning partnerships of the city were also established. The first with the Dutch city ​​of Hulst was signed by Hasenzahl on October 19, 1969 in Michelstadt. Michelstadt became a sister with Rumilly in France on April 1, 1972 with the signing of the documents by the then incumbent mayor Louis Dagand for Rumilly and Erwin Hasenzahl for Michelstadt. The counterparty took place on May 13, 1972 in Rumilly. To date, Michelstadt has not entered into any further partnership. For his contributions to international understanding , he was honored by the Council of Europe in 1979 with the award of the European flag.

In 1970, during his time as mayor, the remains of the town castle, known as Michelstadt Castle, were purchased from the Erbach-Fürstenau house and rededicated for museum purposes. On July 26, 1979 Hasenzahl after twenty-four years, as mayor an honorary designation former mayor into well-earned retirement adopted and at the same time as an honorary citizen honored his city.

In addition to his work as mayor, he was a member of the district council from 1956 to 1981 . He was first deputy and later chairman of the Hessian Association of Towns and Municipalities .