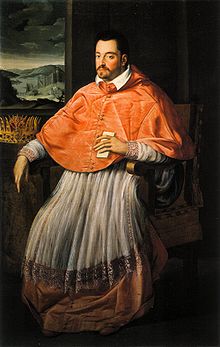 Ferdinand I de Medici as cardinal 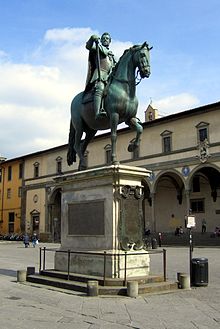 Equestrian monument of Ferdinand I on the “Piazza Santissima Annunziata”, designed by Giambologna and made by Pietro Tacca

Ferdinando Medici was thirty-eight when he succeeded his brother Francesco de 'Medici to the throne. Before that, the relationship between the two had not been particularly good and there was at times open hostility, especially towards Bianca Cappello , Maitresse and future wife of Francesco. Shortly before Francesco's death, however, a reconciliation apparently came about and Ferdinando lived in Francesco's residence. Francesco died completely unexpectedly after an eleven days illness and shortly afterwards Bianca died too. The autopsy officially found malaria as the cause of death, but doubts remained. In 2006, a dispute broke out when scientists around Francesco Mari and Donatella Lippi (University of Florence) wanted to have arsenic found in the remains of Francesco and Bianca, which was heavily criticized by the head of the Medici project for the systematic investigation of the Medici graves, Gino Fornaciari . Fornaciari published his own studies in 2010, which had detected the DNA of Plasmodium falciparum , the pathogen that causes the particularly deadly tropical malaria , in Francesco's skeleton . Donatella Lippi insisted on the fact that there was a murder by arsenic and the detection of DNA from malaria pathogens in the bones did not reveal anything about the cause of death, since malaria was endemic there at the time. She backed this up with new finds in the Vatican archives (a report from Ferdinando to the Pope about death, in which he describes the symptoms of the sick, which are associated with arsenic poisoning).

Ferdinando had become cardinal in 1562 at the age of fourteen , but had never received the sacrament of ordination . He made a name for himself in Rome for his administration of church affairs. He founded the Villa Medici in Rome and acquired many works of art such as B. the group of Niobids, which he later brought to Florence . On behalf of Pope Gregory XIII. He founded the Typographia Medicea in Rome , the first printing company to specialize in books in the languages ​​and scripts of the Orient, which was supposed to promote proselytizing, but also to significantly improve the conditions for oriental studies in the West.

After his accession to the throne, he retained the cardinal dignity until his marriage. In many ways he was the opposite of his brother. Sociable in his demeanor and generous with his wallet, he chose a coat of arms that corresponded to the gentleness of the rule he intended: a swarm of bees with the motto Majestate tantum . He restored the administration of justice and diligently cared about the affairs of state and the well-being of his subjects. Accordingly, Tuscany revived under his government and regained the independence that his brother had given up.

He stimulated trade and also acquired great wealth for himself through this and through the Banca dei Medici in many European cities. With an edict to tolerate Jews and heretics, he ensured that Livorno flourished , where many foreigners, including Spanish and Portuguese Jews , settled. He improved the port founded by Cosimo and promoted traffic with Pisa by means of the Naviglio , a canal to which part of the water of the Arno was fed. He had the drainage project carried out in the Val di Chiana and the plains around Pisa, Fucecchio and in the Val di Nievole cultivated.

In foreign policy he tried to emancipate himself from Spanish rule. After the murder of Heinrich III. of France In 1589, Ferdinando supported the claim of the King of Navarre , undeterred by opposition from Spain and the Catholic League, dismayed by the prospect of a Huguenot on the French throne. He lent Henry IV money and urged him to convert to Catholicism. He also helped convince the Pope to accept Henry's renunciation.

Henry IV was not very grateful for the support given to him, whereupon Ferdinando let the relations with France weaken and showed that he could protect his independence with other allies. He granted Philip III. generous support in his Algerian campaign and the emperor in his war with the Ottoman Empire . In this way, however, he was also forced to burden his people with considerable taxes. Finally, he also reached the formal investiture of Siena , which until then was regarded by Spain as a separate fief.

During the reign of the Grand Duke, the Tuscan fleet was reinforced. The galleys of the Order of the Knights of Santo Stefano were sent to the Berber Coast in 1607 to capture Bona , the headquarters of the corsairs . The following year the same ships won a brilliant victory against a stronger Ottoman fleet.

Ferdinando married Christine von Lothringen in 1588 . The children from this connection were: