The Frankfurt Wachensturm of April 3, 1833 was the failed attempt by around 100 insurgents to trigger a general revolution in Germany by attacking the Hauptwache and Konstablerwache in Frankfurt am Main . Along with the Wartburg Festival and the Hambach Festival , the Frankfurt Wachensturm was one of the most spectacular political actions of the German Vormärz and helped prepare the March Revolution of 1848.

In the age of the Restoration and the Biedermeier period , an opposition formed from early liberal, educational, property and urban bourgeois forces. She was encouraged by the French July Revolution in 1830, the Belgian Revolution in 1830/31 and the revolt of the Poles in the November uprising in 1830/31 and rebelled against the balance of power in the German Confederation, which was intent on restoration. More radical voices were also heard at that time, of which this letter of February 6, 1832 testifies:

“The effect that the passage of the Poles has on the German mind is enormous, it will certainly not go away again anytime soon. We have until the end of June to maintain and increase it, but then something decisive must happen under every condition. If the company remains without strong external support until then, Thuringia is the best place on which the fire can be kindled. [...] "

Events at the Hambach Festival

At the Hambach Festival on May 27, 1832 in front of an audience of 25,000 to 30,000, the initiators Philipp Jakob Siebenpfeiffer and Johann Georg August Wirth called for the end of absolutism. In addition, the two demanded national unity and popular sovereignty . Siebenpfeiffer called on the Germans to overcome small states through brotherhood and scoffed at the constitutions of the German states, which were only given to the people as "little constitutions" to play with. For Wirth, unity was the means to the freedom of the European peoples, but he warned the French against making claims on the left Rhineland.

About 500 to 600 participants attended the next day's event, which was announced the evening before. Siebenpfeiffer called on those present to meet in order to pass resolutions on the reforms that appeared to be necessary and to elect men of their confidence who, as a provisional government , face the Bundestag, as a national convention or a national people's representation .

Subsequently, a meeting of the elected representatives took place that same morning in the apartment of the Schoppmann state estate . Present were: Siebenpfeiffer, Wirth, Brüggemann, Strecker, Hütlin (Mayor), Delisle, Cornelius, Funck, Schüler, Savoye, von Rauschenplatt, Stromeyer, Hallauer and more by chance from Schachtmeyer (retired Rittmeister) . Student led the meeting. The question to be decided was whether one wanted to constitute oneself. Von Rauschenplatt spoke out in favor of an immediate formation of the National Convention and the determination of a day on which the flag of rebellion should be raised and cast. Johann Friedrich Funck, on the other hand, said: “They either wanted to strike, then they would have to stay, or they didn't want to strike what he thought was appropriate then one had to leave”. Later he published in his magazine, the Eulenspiegel , on the following: “One has definitely stated that solemn custody must be opposed to mere judgments of power, but that the open violence which dares to overthrow law cannot be dealt with otherwise than with the guns. ”The day before, several speakers spoke out against armed violence and equated it with usurpation , which stood against the demand for justice and popular sovereignty. The decision was negative. At the same time there was also a break between Siebenpfeiffer, Wirth and the Central Committee over the commitment of the German Press and Fatherland Association. Wirth pleaded for the further development of opposition structures by transforming the German Press and Fatherland Association into a powerful political organization.

In this way a permanent national convention was almost formed, at which representatives of the German districts were elected, including those who were absent. The final vote on the question of whether a constitution would by itself have the competence to start a revolution on behalf of all of Germany, however, let the efforts fail.

The Sandhof Festival in Frankfurt am Main

As early as April 20, an invitation reached Frankfurt residents, namely to what was then Neustadt an der Haardt for the “German National Festival” on the castle ruins in Hambach in the “meaningful” May 1832. The liberal circles in Frankfurt were full of expectation and excitement. On the other hand, the guards of the existing order worried that this event “could not start a fire”. Following the appeal, the lawyers Friedrich Siegmund Jucho and Langer, the merchants Beyschlag, Netz, Hübschmann, Hinckel and Herold, the pharmacist Jost, the booksellers Meidinger and Karl Körner with both sons and his brother Gustav Körner , and also Sauerwein , Funck traveled from Frankfurt , Proud with son . On behalf of the people of Frankfurt, after Wirth's speech in recognition of his struggle for freedom of the press, the boys present presented him with a sword with "Dem Wirth / German in Frankfurt" and the slightly changed fraternity motto "Fatherland - Honor - Freedom" engraved on the blade .

On May 27 , around 4,000 people, including many from neighboring Hesse-Nassau villages, as well as several Polish officers , gathered at the Sandhof estate near Frankfurt , near the village of Niederrad just outside the Frankfurt city limits . Here, as in Hambach, black, red and gold cockades were worn. When the bell struck at 5 o'clock, a boy waved the Frankfurt red and white flag with the Frankfurt white eagle and the paper dealer Theissinger spoke a toast from the balcony of the inn:

"The free Germans who are gathered in Hambach!"

The aftermath of the Hambach Festival, which was held a few days later near Bergen , had an even more radical character than the Sandhof meeting . There the club "King of Prussia" came together. Funck read the speech by Siebenpfeiffer, which was given in Hambach. Funck assured that "the times will soon come when Germany would appear united and undivided from the Danube to the North Sea and all barriers and barriers would fall away" and he brought a cheer to the united Germany.

Consequences of the festivities

Immediately after the Hambach Festival, emissaries were sent out. Von Rauschenplatt had traveled to Heidelberg before the Wilhelmsbad Festival to deliver the news that the Fatherland Association (pupils, Savoy and Geib) had been "reconciled" with Siebenpfeiffer and landlord. The association encourages people to organize similar celebrations. Furthermore, von Rauschenplatt inquired about the means for a revolution to break out.

There were protests against the German Confederation's actions against the speakers at the Hambach Festival. The deeply reactionary federal resolutions of June 28, 1832 and their expansion on July 5, 1832 led to a radicalization of the hitherto moderate sections of the Hambach movement. New people took the place of those arrested or who had fled.

On July 22nd, 1832, instead of the provisional Zweibrücker Central Committee, which had fled to France, the new Central Committee of the Press and Fatherland Association was established in Frankfurt am Main. In August the Frankfurt executive board and the Stuttgart revolutionary Gottlob Franck agreed to prepare for the armed uprising.

The circle entrusted the Dürkheim teacher Friedrich Wilhelm Knoebel , also a participant in the Hambach Festival, and others with establishing the necessary supraregional connections. At the beginning of November 1832, Knöbel held talks with the Stuttgart district around Franck and Lieutenant Ernst Ludwig Koseritz , who formed the Franckh-Koseritz conspiracy . From Stuttgart he went to Metz to see Friedrich Schüler , who was ready to enter the planned government. At the beginning of December Knöbel was in Paris to include the German emigrants and other republicans in the planning.

In Stuttgart, on December 26th, the Burschentag decided to convert the fraternities into political clubs and to join the Vaterlandsverein. The start of the armed uprising was set for the beginning of April 1833. 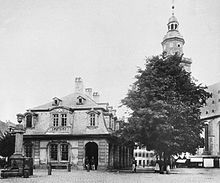 On April 3, 1833, the conspirators, including the later workers' leader Karl Schapper , took action in Frankfurt under the leadership of Gustav Bunsen . The city was the seat of the Bundestag , the permanent conference of ambassadors , which had been the only political institution responsible for the entire German Confederation since 1815 . The insurgents viewed the Bundestag as an instrument of the restorative policy of the German princes and as an obstacle to their political goals.

The plan of the insurgents, mostly fraternity members from Heidelberg and Würzburg, but also experienced officers such as the Polish exile Jan Paweł Lelewel , envisaged storming the two Frankfurt police stations, seizing the weapons and the treasury of the German Confederation and then the Envoys of the German princes who met not far from the main guard in the Palais Thurn und Taxis to take prisoner. This should be the signal for a national and democratic survey all over Germany.

The plan, however, had been betrayed and therefore doomed to failure in advance. Although the conspirators found out about the betrayal in time, they gave the signal to attack, hoping for support from Hessian farmers and Frankfurt citizens. This support did not materialize, however, so that the military, which awaited the students, had an easy time of it. The exchange of fire resulted in 9 dead and 24 injured.

The action earned the students a lot of sympathy from all over Germany, including from people who had rejected their approach as hasty, but the Bundestag decided on the temporary federal execution against the Free City of Frankfurt . Since then, a garrison of 2,500 Austrian and Prussian soldiers has been permanently stationed in Frankfurt, which challenged the city's sovereignty, while the princely Bundestag diplomats from then on denounced the Free City as a “liberal nest”.

When the prison guards later helped the imprisoned insurgents to escape, this was celebrated in a variety of leaflets and songs. On June 30, 1833, the federal central authority (with its seat in Frankfurt) was created, which, as an inquisition organ, investigated more than 2000 suspects who were registered in the "Black Book" until it was dissolved in 1842. Many of the conspirators therefore fled to the USA (see " Thirties "). Because of high treason finally 39 people were on death convicted, including the alleged ringleader Hermann Müller-Strübing ; later, however, the sentences were commuted to in some cases life imprisonment .