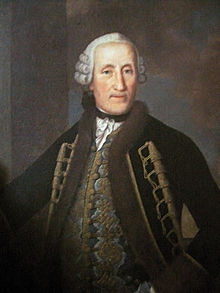 During his most important period of activity in Saarbrücken, Stengel created the new building of Saarbrücken Castle (1738), the Friedenskirche (1743), the new town hall and the Erbprinzenpalais (1748), the Church of St. Johann (1754) and the Ludwigskirche (1775). In addition, he built numerous small churches, pleasure palaces , forest houses and parsonages in Saarland and Alsace .

Saarbrücken around 1770 with the important stem buildings 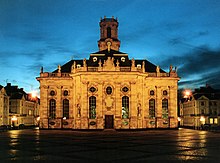 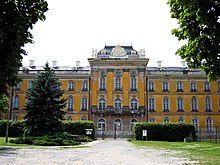 Dornburg Castle on the Elbe

At the age of 14, the son of a secret princely secretary had to leave his parents' house in Zerbst in order to continue growing up in the care of his mother's brother in Berlin . His father had died in 1699. He immediately took up studies at the “Academy of Fine Arts” as an engineer officer, that is, he was trained in drawing, geometry, civil engineering, fortress construction and artillery. In 1712 he traveled to northern Italy to learn about Italian architecture.

From 1715 to 1719 Stengel was employed as a surveyor for the senior building management of the Duchy of Saxony-Gotha-Altenburg in Gotha . In 1719 he was commissioned to carry out a “general state renovation” in the Duchy of Saxony-Eisenach . On this occasion he came into contact with officials of the Fulda prince abbot Adolph von Dalberg , which finally led to a position in Fulda in 1722. After initially working there as a surveyor, pyrotechnician and as a teacher for the princely pages and as a festival arranger, he was appointed building inspector in 1727. During this time he worked on the completion of the Fulda City Palace begun by the Italian master builder Andrea Gallasini . Stengel continued to work as a surveyor and was loaned to Kurmainz in 1728 for surveying work in the Amöneburg office . At the same time, Stengel also worked in other areas, for example he developed a barometer in 1729 , but suffered a protracted mercury poisoning .

In the hope of succeeding the Gotha master builder Johann Erhard Straßburger , Stengel returned to Gotha in 1730 , but only got a job as a geometer and engineer for fortifications. Therefore, three years later, he accepted the offer of the Prince of Nassau-Usingen to work there as court architect. One of his first works was the reconstruction of the Usingen Palace, after which he completed the interior design of the Biebrich Palace . On his own responsibility he added the marshal's wing and the winter building to the palace in 1740. He also developed the plans for the Fasanerie hunting lodge , which was completed in 1749.

After the division of Nassau in 1735, Stengel worked mainly for Count Wilhelm Heinrich von Nassau-Saarbrücken . This enabled him to go on a study trip to Paris and Versailles in 1739 , where he got to know the works of modern French architects. The impressions gained there had a style-defining effect on his further work and allowed his artistic abilities to develop to the full. As early as 1738, Stengel began to rebuild the Saarbrücken City Palace, which was followed by a successful creative phase with the high point of the construction of the Ludwigskirche in 1775.

In 1750 he received a call from his homeland in the form of a request from Princess Johanna Elisabeth von Anhalt-Zerbst to rebuild her burned down widow's residence at Schloss Dornburg in Dornburg ( Anhalt ). The reconstruction, which he oversaw from Saarbrücken, was carried out according to Stengel's plans. Presumably he also provided the plans for the Dornburg Church, which was completed in 1758.

In August 1751, Stengel got his third job in Gotha , where he succeeded Johann Erhard Straßburger, who retired that year . As "City Council and Building Director" he initially led the redesign of the rooms of Duchess Luise Dorothea of ​​Saxe-Gotha-Altenburg in the corps de logis of Friedenstein Castle . In the same year, Stengel was also given the management of the new orangery in Gotha , as his predecessor in this position, the builder Gottfried Heinrich Krohne , had fallen out of favor at the Gotha court. Stengel directed the further expansion of the "Laurierhaus" of the orangery, which Krohne had begun, but asked in April 1752 that he be released from the Gotha service.

In 1761, Stengel was appointed general building director and real chamber councilor of Nassau-Saarbrücken , in addition he was also the forest chamber president and director of the Saarbrücken orphanage, poor house and penitentiary. He started writing his biography in 1763 and retired in 1775.

Stengel was married three times and had three daughters and two sons. Both sons followed in their father's footsteps, Johann Friedrich became the court architect of the Russian Tsarina Katharina II in 1775 and Balthasar Wilhelm was chief construction director in Saarbrücken from 1785. When Stengel died at the ripe old age of 92, Prince Ludwig von Saarbrücken granted his widow an annual pension of 160 guilders , “because the now deceased Cammer Rath has rendered us many years of loyal service” . Stengel was buried in Saarbrücken.

Several streets are named after him, including in Saarbrücken , Fulda , Usingen and Hecklingen , district of Groß Börnecke .