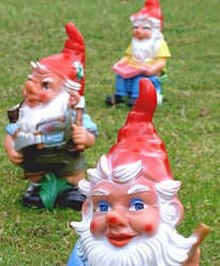 A garden gnome , originally a gnome figure , is a figure of a dwarf originally made of marble , sandstone , and baked clay , but now also made of plastic , which is used to furnish gardens and decorate living spaces. It is estimated that there are around 25 million garden gnomes in German gardens alone today .

Garden gnomes are made from many different materials. While the original garden gnome was and is made from baked clay and painted by hand, the plastics industry in particular ensured a wider spread with inexpensive variants.

Classic garden gnomes are often modeled after gardeners or medieval miners from the middle of the 19th century . They have a leather apron and a shovel , pickaxe , lantern or wheelbarrow and usually wear a red pointed hat , which is reminiscent of the ancient Phrygian hat and resembles the headgear of Santa Claus .

A sandstone figure in the courtyard of Lamberg Castle ( Johann Baptist Wuntscher , 1720) 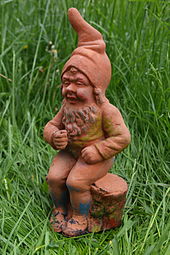 Dwarfs can be found in Germanic and Greek mythology as well as in legends and also in several fairy tales by the Brothers Grimm . Even in ancient times, rulers liked to entertain themselves with short or malformed people, so-called court dwarves . In the Renaissance, they were often employed at royal courts to banish moods and boredom . The court dwarf of Emperor Charles VI was particularly valued . , Jakob Ries . The caricatures of Gobbi by Jacques Callot , the court painter of Cosimo II at the court of Florence , became known throughout Europe and found many imitators.

The oldest surviving baroque garden gnomes are the 28 marble sculptures designed by Johann Bernhard Fischer von Erlach in the dwarf garden of Mirabell Palace in Salzburg , which were created between 1690 and 1695, and the sandstone figures at Greillenstein Palace from around 1700 . Baroque garden gnomes in palace gardens can then be found mainly in the baroque gardens of residences and monasteries in today's Austria , Germany, the Czech Republic , northern Italy and Slovenia . Of the many thousands of individually designed dwarfs, fewer than 300 have survived. During the Enlightenment around 1800, the dwarves of the Regents' Gardens fell into disrepute.

Garden gnomes are documented in literature in Johann Wolfgang von Goethe's verse epic Hermann and Dorothea (1797). There a pharmacist, owner of a garden with “beggars of stone” and “colored dwarfs” complains that nobody should look at it anymore because everything should now be different: “tasteful, as they say it, [...] simple and smooth”. Nevertheless, the garden gnomes spread in the (small) bourgeois front garden in the 19th century , first in Great Britain , Germany, Austria and Switzerland and later in other European and non-European countries.

The Meissen Manufactory and, between 1744 and 1750, the Vienna Porcelain Manufactory had already produced numerous individual porcelain figures for the popular dwarf galleries in aristocratic ornamental gardens. The terracotta factories in Thuringia also produced animal heads and small statues to decorate hunting locks , for example . The first dwarf series (Pixies) were made in England around 1800.

Garden gnomes are mentioned again in England in 1847. Sir Charles Isham owned terracotta figures from Nuremberg and used them to enrich the rock garden at Lamport Hall in Northamptonshire . This measured 35 × 27 m, was up to 7 m high and was located at the back of the house so that the tenth baronet could see it from his bedroom. The dwarves were depicted at work in caves, bridges and waterfalls. The spiritistic count allegedly also thought the garden gnomes were guardian spirits . In his will, the count stipulated that the figures were to be removed; in 1903, his daughters allegedly destroyed them with air rifles . Lampy, one of the original 21 dwarfs, can still be seen there. It was hidden in a crevice and was only discovered by Sir Gyles Isham after the Second World War . Today it is kept in a showcase in the house.

In 1872 two companies were founded in Gräfenroda in Thuringia, August Heissner and Philipp Griebel , which later produced garden gnomes in mass and series production. In 1898 Thuringian dwarfs were first offered at the Leipzig Fair . After more and more manufacturers began to manufacture garden gnomes, export sales of the supposedly typical German garden decoration stalled in the First and Second World Wars. In contrast, the garden gnome was not valued everywhere, even during the Nazi era . After the proclamation of the German Wine Route in the Pfalz , the then imposed NSDAP - Gauleiter Josef Bürckel a ban against allegedly disturbing interventions in the landscape along the road, which prohibited the establishment of garden gnomes on private property.

Garden gnomes or all "brightly painted statues" are forbidden at the Chelsea Flower Show in England . There was an exception in 2013 in the year of the garden gnome .

After 1990 the garden gnome experienced a “rebirth” through the creation of new, provocative models. Now, for example, dwarfs with knives in their backs, as exhibitionists, showing a "bird" , with chainsaws , with raised finger , as politicians ( Schröder , Kohl , Gysi , Blüm , Lafontaine etc.) were modeled.

Workplace of a dwarf painter

The media interest , which also existed far outside of Germany, ensured that the garden gnome found completely new lovers who could not do anything with the classic dwarf. The dwarf designer Andreas Klein , known from the media , has been dealing with the history of garden gnomes for over 20 years and designs a number of modern garden gnomes every year to preserve the garden gnome.

This cult continues to this day, as the remaining "dwarf industry" in Germany keeps picking up on topical issues from politics and current affairs and making them the subject of new dwarfs. Often from the point of view: "Humor is when many have to laugh about it".

Garden gnomes for sale in a Polish market

"Roped" garden gnomes on a house wall in Amriswil TG

Plagiarism, which came mainly from Eastern Europe , became problematic . There, models protected by design patents were copied on a large scale using cheap materials ( plaster instead of fired clay and cast resin instead of PVC plastic) and brought onto the market. Individual copyright lawsuits were won without exception, but could not prevent the production of plagiarism, as these were significantly cheaper in the countries due to the material price, the no development costs and low wages.

Many lovers of classic garden gnomes are frowned upon in newer designs in unfamiliar poses (e.g. with their pants down). The inclusion of female dwarf figures in the range has also been criticized, although these were by no means rare among baroque garden gnomes. The first figure of the new dwarf woman type was supposedly Countess Roda .

A modern adaptation of the garden gnome motif can be found in the figure of the Smurfs .

If garden gnomes (for example, gnomes with “ stinky fingers ” or bared rumps , so-called frustration gnomes ) are set up with the intention of permanently disturbing the peace of the neighbors, this represents a defamation and the neighbor can demand the removal of the gnomes.

The artist Ottmar Hörl produces installations with serial figures. In July 2009 the Nuremberg public prosecutor's office briefly opened an investigation based on a sculpture showing a garden gnome with a Hitler salute. In October 2009 an installation of 1,200 of these figures was shown in Straubing at the invitation of the SPD local association, which drew criticism from the Vice President of the International Dachau Committee, Max Mannheimer .

In 2018, a fan garden gnome of the football club TSV 1860 Munich, set up in the garden of an apartment owner in Munich, triggered a lawsuit. The other owners of the residential complex were of the opinion that the garden gnome should not be erected without everyone's consent. But the Munich district court agreed that the dwarf owner was right at the beginning of 2018. The consent of the other owners is not required for the installation of this individual dwarf.

International media interest and a controversy sparked garden gnomes in the 2014 state elections in Vorarlberg. The SPÖ used around 20,000 garden gnomes in the election campaign. The so-called coolmen were used , such a dwarf had a sign with a short election slogan. The dwarfs were set up in busy places and along streets. When 400 dwarfs disappeared overnight, this dwarf theft was reported by the SPÖ Vorarlberg. The SPÖ first suspected a competitor, because in many places where there were dwarfs before, election posters of the competitor were now emblazoned. 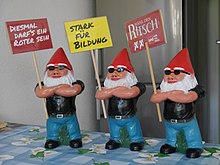 In 1984 an international association for the protection of garden gnomes was founded with its seat in Basel , whose concern is the spread of "dwarf science" (jokingly "nanology") and the production of historically "correct" garden gnomes . She defined what a “good” - that is, real - garden gnome is: He is a maximum of 69 centimeters tall, wears a pointed cap, a beard and is male.

The front for the liberation of the garden gnomes (in France Front de Liberation des Nains de Jardins , in Italy MALAG ), whose followers "liberated" the figures from front gardens and often in forests, their "natural habitat", was probably created towards the end of the 1990s . suspend.

Garden gnomes were seen, sometimes with an ironic and critical undertone, as the epitome of philistine bourgeoisie , a sign of bad taste and a good example of kitsch , with a low point in the late 1960s. Garden gnomes are also understood as an ironic representation of the German Michel . On the one hand because of the more modern design of the dwarfs, on the other hand because of a change in attitudes towards kitsch and camp , for example by the critic Susan Sontag and the artist Jeff Koons , this picture has partially changed.

In Pfaffstätt , Upper Austria, Helga Eidenhammer and her husband have the largest collection in the world with 4,443 dwarfs in the garden as well as in and around the house. There is also a garden gnome museum in Gräfenroda on the premises of the German garden gnome manufacturer founded in 1874 and the last (of 16) still in existence.

In Nanoose Bay in the Canadian province of British Columbia stands the world's largest figure of a garden gnome with a height of 7.91 m. Built in 1998, it was originally intended to advertise an amusement park, but it never went into operation. After the figure has since stood as an eye-catcher at a gas station, it was acquired in April 2019 by a farmer in Saanich who runs an amusement park with themed worlds.