This article deals with the soccer coach Georg Keßler. For other people see Georg Kessler . 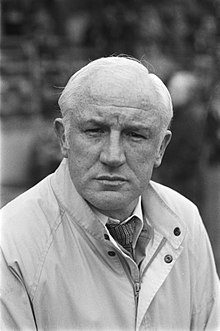 Georg Keßler (born September 23, 1932 in St. Ingbert ) is a former German soccer coach and player. Because of his appearance and manners, he was nicknamed "Sir". He was Bondscoach (Dutch national coach), his greatest successes were the national championship with AZ Alkmaar and two UEFA Cup finals. In 1978 he led SSW Innsbruck to win the Austrian Cup. In Germany he led Hertha BSC to the runner-up in the 1974/75 season and to participate in the cup final two years later.

Georg Keßler was born in St. Ingbert in Saarland in 1932 to a German father and a Dutch mother. In his early years he played for Fortuna '54 in the Netherlands . He later became a professor at the Sports University in Cologne . Georg Keßler lives in Olef in the Eifel .

In 1965 he joined the Dutch Football Association KNVB . The following year he became Bondscoach, the main national coach of the Dutch national football team . The team was led by Kessler to 1970, without itself 1966 World Cup , 1968 European Championship , Olympics in 1968 or 1970 World Cup qualifying.

In 1970/71 he trained Sparta Rotterdam . The following season he won the championship and cup double with the Belgian club RSC Anderlecht . Keßler was controversial because of his authoritarian appearance and was released early during the 1972/73 season. He moved to PEC Zwolle in the Netherlands and stayed there until 1974.

In July 1974 Keßler began his first engagement in Germany at Hertha BSC . There he succeeded Helmut Kronsbein and reached the runner-up in 1975. In Keßler's third season, Hertha reached the final of the DFB Cup for the first time . In the Niedersachsenstadion Hannover the game against 1. FC Köln ended 1-1 after extra time. Since there was no penalty shoot-out at the time, a cup final had to be repeated for the first and only time. The second game took place two days later on May 30, 1977 and ended 1-0 for Cologne.

After the cup final, Keßler moved to SSW Innsbruck for one season in 1977/78 and reached the cup final against VOEST Linz . The first leg ended 1: 1, the second game brought Innsbruck in Tivoli with 2: 1 the cup victory.

Then Keßler trained the Dutch AZ Alkmaar , who had only been promoted to the Eredivisie three years earlier . Alkmaar reached the UEFA Cup final under Keßler , won the Dutch championship and the KNVB Cup. In the UEFA Cup final, Alkmaar lost 3-0 to the English team Ipswich Town in the first leg, which could not be compensated for by the second leg win 4-2.

In 1982 he moved to Club Bruges, where he reached 5th and 3rd place in his two years. He then accepted an engagement with Olympiacos Piraeus , which failed. The engagement was ended prematurely on the 25th matchday.

Finally, in February 1986, he joined the relegation-threatened 1. FC Köln as the successor to Hannes Löhr . He brought the team to 13th place in the Bundesliga and into the UEFA Cup final against Real Madrid . Real Madrid won their home game at the Santiago Bernabéu Stadium 5-1. The second leg took place in the Olympiastadion Berlin due to previous spectator riots in Cologne . Cologne won 2-0 and could not compensate for the defeat in the first leg. In the following season Cologne was on the seventh matchday after a 1: 3 against Bayer 05 Uerdingen on rank 16. Keßler was dismissed and replaced by Christoph Daum .

End of career in Belgium

Georg Keßler went back to Belgium and had engagements at Royal Antwerp (3rd place), Standard Liège and Fortuna Sittard in the Netherlands , before he retired at the age of 60. In 1996 he jumped back in with Royal Antwerp. In the first season he reached the 6th rank, in the following year Royal Antwerp rose to the second class.

Record as national coach of the Netherlands