Max Merkel (born December 7, 1918 in Vienna , † November 28, 2006 in Putzbrunn , Germany ) was an Austrian football player and coach . As an active player he celebrated his greatest successes at Rapid Vienna , as a coach he was able to make championships with Rapid, TSV 1860 Munich , 1. FC Nürnberg and Atlético Madrid . After his coaching career, he wrote numerous books on football and was active as a newspaper columnist.

Max Merkel came to SK Rapid Wien through a newspaper advertisement . Although he actually wanted to be a striker, he was used as a defender from the start, which he remained throughout his career. Because he was no longer used in the Hütteldorfer combat team after his debut in 1937, he initially moved to Dornbach for the Vienna Sport Club . His football career was interrupted by the Second World War . During this time he also came on August 27, 1939 as one of eight Austrians under Reich coach Sepp Herberger in the game of the "Greater German" national football team against Slovakia. The war meant that Max Merkel was temporarily only able to play at LSV Markersdorf an der Pielach , an air force base that served as a kind of "reception camp" for football players who had moved in. After the end of the war, Max Merkel finally returned to Hütteldorf in 1946, was champion four times with Rapid and in 1951 also won the Centropa Cup . On June 22, 1952, he played his only international match for Austria against Switzerland. 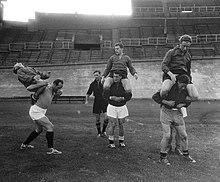 Max Merkel (left) carries a Dutch player on his shoulder, 1955

Max Merkel began his coaching career in 1954 in the Netherlands, where he initially trained for six months at HBS Craeyenhout . His monthly salary is said to have been 700 marks. He then took over from 1955 to 1956 as coach of the Dutch national team , with which he achieved seven wins and one draw in ten games between April 1955 and June 1956 with only two defeats. During this period, 1956 saw the first victory of a Dutch national team over the German selection in 24 years. His only coaching station in Austria was - besides SC Landhaus - the SK Rapid Wien from 1956 to 1958, where he became champion in 1957.

However, he celebrated his greatest successes as a coach in Germany and Spain. His first stop in Germany was Borussia Dortmund . Merkel rejuvenated the team and reached the final of the German championship in 1961, which was lost 3-0 to 1. FC Nürnberg. In 1963 he led TSV 1860 Munich , for which he is said to have been paid 3,000 marks per month, in the newly founded Bundesliga and won the 1964 DFB Cup and 1966 champions with the “Löwen”. In 1965 he reached the European Cup final with the team . The game was lost 2-0 to West Ham United in front of 100,000 spectators at Wembley Stadium . In the season after the championship, the Lions started badly and were on the penultimate place in the table until matchday 11. Merkel then led the team to 8th place and on November 17, 1966, his team won the first leg of the European Cup with 1-0 against Real Madrid , but lost the second leg 3-1 14 days later in Madrid . Then he fell out with the team and was dismissed after the 16th matchday. At first it was said that the club had accepted Merkel's resignation at the end of the 1966/67 season, four board members had resigned due to differences with him, then it was reported that the controversy with the players was continuing. He is said to have had a scuffle with goalkeeper Petar Radenković , who rebelled against the tough coach.

On December 27, 1966, Walter Luther , the first chairman of the 14th place 1. FC Nürnberg , where there was also a coaching crisis, confirmed that negotiations with Merkel had already started before the Christmas holidays. Merkel said he had come to terms with the inglorious ending in 1860. After signing a contract for the time being until the end of the season, Merkel took over the Nürnberger on January 1, 1967, with whom he finished the season in tenth place, while the "Lions" made it to runner-up - the best position to date after the championship title won the previous year. In the following season Merkel surprisingly celebrated the next and so far last championship of the Franks with the Nuremberg team. After that, he made a bad start to the following season with the champions in the Bundesliga and was eliminated in the first round of the European Cup against Ajax Amsterdam (at that time not a major player in European club football). He was able to lead the team up to 7th place on matchday five, but then slowly relegated to 16th place at the end of the row. At the beginning of the second half of the season, the club was in last place in the table and the player-coach relationship broke up again, although factors such as player departures, lack of shape (lack of discipline by goalgetter Zvezdan Čebinac ; this was already in the autumn before the match against Ajax Amsterdam in the European Cup Meister appeared for the first time). In March Merkel left the bottom of the table (according to the official communiqué it was said that he was "resigning as coach by June 30th for health reasons" by mutual agreement) and Robert Körner , former Merkel player at Rapid, temporarily took over the supervision of the licensed players. Just two days later, Max Morlock , then a "Trainer newcomer", named as successor because he had a corresponding German coaching license (it still stayed with grains as head trainer), because of the club envisaged Gunther Baumann had rejected the offer because he was tied to VfB Stuttgart until the end of the season . Under their successor Kuno Klötzer , the Franconians were able to improve by one place, but in the end 1. FC Nürnberg was relegated as the only champions to date.

From 1971 to 1973 he was the coach of Atlético Madrid . In Spain, Max Merkel won the cup and the national championship. However, he was dismissed in the nationalistic zeal after the Atlético board of directors got wind of the fact that he let the Bild newspaper announce that Spain would actually be quite nice if only there were no Spaniards there. He was then replaced by Luis Aragonés .

From July 1975 until his dismissal on March 9, 1976, Merkel coached FC Schalke 04 , but where the expected successes failed to materialize. He had hardly identified with the club, which was made clear by sayings such as:

“He will never get a headache because he will never use his head to think. Before he becomes a national player, I will be a singer at the Metropolitan Opera "

In 1979 Merkel was single-handedly signed by the President of Bayern Munich Wilhelm Neudecker as a coach. However, the players refused to accept Merkel as coach, which led to Neudecker's resignation. Although Merkel was not on the training ground once, FC Bayern fulfilled the obligations entered into in the two-year contract.

Surprisingly his comeback came as a coach, when he on 27 November 1981, the Karlsruher SC signed and with the release of Manfred Krafft was the 111th coaching change in the history of the German Bundesliga. However, the welcome from the fans at his first game (1: 4 home defeat against 1. FC Köln ) was sobering, because the banners said: “Merkel, go home”. On the other hand, his debut had triggered a spectator boom (combined with additional income), because with 30,000 visitors came ten thousand more than usual.

The ÖFB and its president Karl Sekanina spoke out in favor of installing a sports director. The intention was to qualify for the soccer world championship in Argentina. Merkel was one of the “hot favorites”; the league boss Hans Reitinger had already refused. With the internationally active manager Emil Östreicher , whose engagement as club manager at FC Schalke 04 had not come about due to a veto by the local vice-president Ernst Kuzorra , a new candidate name had appeared in this function.

According to a contract that was fixed by handshake with the ÖFB President Sekanina on August 3, 1977, Merkel should have come to Vienna a day later, but in the absence of a suitable framework, it did not arrive until August 8, in Course of the traditional Monday evening program "Sport am Montag" for the (official) signing of a contract as sports director that runs until August 30, 1978. It stated that he would start work on August 15th. Merkel polarized enormously, there were many dissenting voices, and during his work, which ended a little earlier, several of his well-known derogatory slogans were trumpeted on his part (perhaps as "image cultivation"), at least his relationship with team boss Helmut Senekowitsch was tense.

There were also rumors that he would become the new team boss, on the other hand, “MM” seemed to have “had enough of the ÖFB” ahead of time. He said that he was losing a lot of money every day because he could earn that as a coach abroad. After a discussion on April 26th with President Sekanina, Merkel declared that he would keep his contract, which ran until August 30th. With the engagement of Karl Stotz , who officially became team boss and sports director on August 1st, 1978, the Max Merkel era was definitely over.

On the morning of November 18, 1967, a stranger in a phone call to a Nuremberg newspaper threatened to blow up the Nuremberg stadium with a bomb and to carry out an attack against Max Merkel. 60 police officers then searched the stadium, but found no bomb, so that the Bundesliga game against Aachen (4-1 victory of the "club") could take place.

At the beginning of February 1968 he was sentenced by the DFB Sports Court after six hours of hearing for "insulting statements and insults" to a fine of DM 12,000. Most serious was a crime on November 4, 1967 in Cologne, when he "delivered the Swabian greeting to the audience in accordance with a request from Götz von Berlichingen" by slapping his hand against the buttocks. In Cologne he had also threatened the trainer Willi Multhaup and the assistant Hans Schäfer . Merkel was found guilty on eight out of nine counts.

In the 1980s , Max Merkel made a name for himself as a columnist for the image . He was one of the harshest critics of national coach Jupp Derwall before he was fired in 1984. Merkel's sayings, which have accompanied the football world since the 1960s, are legendary. His performance prognoses for the Bundesliga team at the beginning of the season (“Max merkelt wieder”), published in Bild , were not so much professional analyzes as the entertainment aimed at punchlines. From 1985, the ghostwriter of Merkel's column was the picture editor Bernd Stubmann .

Merkel was married and had a daughter. In his private life he has been living in seclusion in Putzbrunn near Munich in recent years. Max Merkel died there on November 28, 2006 at the age of 87. He found his final resting place in the new cemetery in Hohenbrunn , a neighboring community.