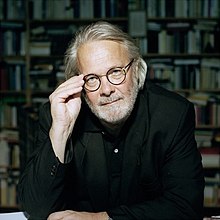 Gerhard Roth was born on June 24, 1942 as the second child of the doctor Emil Roth (1912-1995) and the nursing student Erna Druschnitz (1917-1998) in Graz. The Roths' home was bombed in 1945, resulting in sixteen fatalities. The mother had previously fled to Germany with her three sons Paul (1941-2001), Gerhard and Helmut (* 1944), where her husband worked in a military hospital in Würzburg . After the end of World War II, the family returned to Graz. Gerhard Roth attended the Kepler-Realgymnasium from 1952 and the Lichtenfels-Gymnasium from 1955 , where he graduated from high school in 1961 . From childhood he was friends with the painter Peter Pongratz . In 1962 he joined theForum Stadtpark in two plays by Wolfgang Bauer , whom he knew from school, as an actor.

Gerhard Roth began studying medicine at the Karl-Franzens University in Graz . In 1963 he married Erika Wolfgruber (* 1939), with whom he had three children. In 1967 he broke off his studies and began working as an organizational manager at the data center in Graz, after initially being an operator there and then, from 1970, an organizer. In 1971, together with Bernhard Lernpeiss, he published an introduction to electronic data processing . In 1972 he became a member of the Forum Stadtpark after his first literary book was published in the same year. His acquaintances with Gerhard Rühm , HC Artmann and Peter Handke , with whom he became friends, date from this time . In 1972 he traveled to the USA together with Wolfgang Bauer and a year later together with Alfred Kolleritsch . The third trip to North America followed in 1975 and the fourth in 1978 on the occasion of the film adaptation of his novel The Great Horizon (1974) and the author's portrait I was addicted to pictures (1979). In 1976 he separated from his wife and moved to Obergreith in southern Styria with his future wife Senta Thonhauser (whom he married in 1995) as a freelance writer. Here he became involved in the construction of the Greith House . From 1973 to 1978 he was a member of the Graz Authors' Assembly . In 1977 he left the data center in Graz and switched from the Suhrkamp publishing house to the S. Fischer publishing house , which has been in charge of his work ever since.

In 1979 he went to Hamburg as part of the funding program "Foreign Artists to Visit Hamburg". In 1980 (his) photographs for the novel Der Stille Ozean were exhibited for the first time in the Kulturhaus Graz. Gerhard Roth had been friends with Günter Brus since 1982 , who later illustrated some of his books. Since 1986 he lived alternately in Vienna and in Kopreinigg in southern Styria as a summer residence.

As a narrator, playwright and essayist, Gerhard Roth repeatedly spoke out critically about Austria's past and political present. From 1978 he worked on the seven-volume cycle The Archives of Silence , set in southern Styria and Vienna, which he completed in 1991. Image-text compositions were created with the photographer Franz Killmeyer . From 1993 he worked on the Orkus cycle , which was completed in 2011. This work by Roth in particular has been praised as “prose that draws attention” ( Andreas Dorschel ) because of its “constant diligence in perceiving and formulating”.

In 2001, the province of Styria bought Gerhard Roth's literary and photographic legacy, which is located in the Franz Nabl Institute for Literary Research.

Gerhard Roth is the father of director Thomas Roth .

At the general assembly of SK Sturm Graz on January 18, 2016, he was appointed honorary ambassador of SK Sturm Graz together with comedian and cabaret artist Gernot Kulis and musician Manfred "Cook" Koch from Egon7 .

Gerhard Roth died in Graz on the evening of February 8, 2022 as a result of a serious illness.

Gerhard Roth described himself as "obsessed with writing in the best sense of the word". At the center of many of his novels is the vainly struggling hero, to whom the world appears to be an agonizing and untenable state. The author often dresses his works in the form of a crime novel, which is typical of the genre, although he is concerned with “uncovering” what is hidden in a figurative sense. The focus of the two novel cycles The Archives of Silence (1980-1991) and Orkus (1995-2011) is the narrated and documented coming to terms with the past from a general point of view and contemporary Austrian history from a particular perspective.

In 1979 Gerhard Roth wrote screenplays for the three-part documentary film "People in Austria", which he directed with Ingrid Melzer. In 1982, together with Walter Kappacher, Roth and Walter Kappacher adapted one of his novels for the first time for director and cameraman Xaver Schwarzenberger . The film adaptation of the second volume of the Archives of Silence was awarded the Silver Bear at the Berlin Film Festival in 1983 . In 1990, the two- parter Rural Death was filmed, directed by Michael Schottenberg . In 1992 Roth wrote "The Secret", the screenplay was again directed by Michael Schottenberg. This was followed in 1994 by the award-winning TV film Business , another Roth and Schottenberg collaboration. In 1995, the director Jan Schütte was commissioned by the ORF to produce Eine Reise in das Innere von Wien , for which the television version received the Romy for best camera. Gerhard Roth's son Thomas Roth directed Schnellschuss in 1995 and the 1997 sequel to this Roth film entitled Im Kreuzfeuer . Also in 1997, another Roth/Roth collaboration came to Austrian cinemas with the cinema version of the novel Der See . In 2001, the novel A dog came into the kitchen was filmed from a screenplay by Gerhard Roth, directed by Xaver Schwarzenberger.