Heinrich Albert , also Heinrich Alberti , (born June 28, 1604 in Lobenstein ; † October 6, 1651 in Königsberg ) was a German composer and song writer of the Baroque period . He was a representative of the Königsberg poets' circle " Kürbishütte " and song composer in the succession of Heinrich Schütz .

Heinrich Albert was born in Lobenstein in the Thuringian Principality of Reuss . He attended the Latin school in Gera from 1619 to 1621 and studied music in 1622 with his cousin Heinrich Schütz in Dresden , who introduced him to the basics of composition technology. At the request of his parents, Albert had to study law in Leipzig from 1623 . There, however, he will have continued to study music with the Thomas cantor Johann Hermann Schein , who is a friend of Schütz .

In 1626 he avoided the approaching danger of the Thirty Years' War and went to Konigsberg with his friend Simon Dach . In 1627, on the way from Königsberg to Warsaw, in the wake of a Dutch peace delegation, he was captured by Sweden, from which he was only able to return to Königsberg a year later. After that he first studied fortress studies, but finally turned to music. From April 1, 1631 until his untimely death at the age of 47, Heinrich Albert was a permanent organist at the cathedral church. The university hosted his funeral, and the memorial speech in Latin became the main source for his biography.

In 1634 his cousin Heinrich Schütz, who was a guest musician at the Danish court, brought him to Copenhagen, where Heinrich Albert composed a song for the wedding celebrations of Crown Prince Christian with Magdalena Sibylle von Sachsen .

Albert was a member of the Königsberg poets' circle, which included Simon Dach, Robert Roberthin , Georg Mylius and, at times, Martin Opitz . The group met in the pumpkin hut , an arbor in Heinrich Albert's garden. The garden was the Schwedenschanze at the mouth of the Lindengraben in the Pregel. The Kneiphöfsche Rat had given it to its organist in 1630. Albert grew pumpkins in his arbor, and his friends carved their shepherds' names into their shells. Martin Opitz visited his friend Simon Dach here in 1638. However, the garden with the hut became a victim of the town planning of the time, which included building on the willow dam. 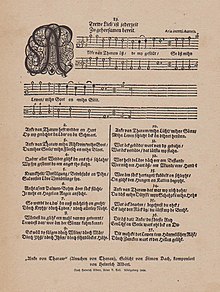 Albert moved in Königsberg in the space between student and middle-class milieu. He provided music for quite a few academic occasions, including the centenary of the Albertina in 1644. Numerous occasional compositions by Albert have been preserved: for weddings and especially for funeral ceremonies, tribute music for high-ranking people, songs about nature, wine and love. Some of Albert's spiritual songs, such as God of heaven and earth or I am Lord in your power , are still in evangelical hymn books today .

Albert was a pupil of the cathedral and court music director Johann Stobäus († 1646), who represented the Königsberg Tonschule, which can be set up from Johannes Eccard to Johann Sebastiani (approx. 1590–1690). Here the five-part polyphonic vowel movement predominated, which Albert also used. However, Heinrich Albert became popular with his unanimous figured bass songs .

The French influence is palpable in his melodies, which delicately takes into account the rise and fall as well as the length and brevity of the word. There is also an Italian influence, which on the one hand represents the affect musically (this is how melisms and coloraturas express passion and movement), and on the other hand also allows dance rhythms to flow in - here Gabrieli continues through Schütz's mediation. German and especially Polish dance rhythms can also be found in his melodies.

Heinrich Albert set his own poems and those of his friends to music and published his music from 1638 mainly in a total of eight volumes of arias or melodies as scores . He provided the exercise books with prefaces he had written himself, in which he gave detailed and detailed instructions on how to play. In addition, however, there were also many occasional prints that had not yet been fully recorded in the bibliography.

A number of his songs deviate from the simple song form, some show a cantata-like structure: the song text is composed through , an instrumental part introduces, the singing is single and two-part solo singing, a short choir or an instrumental replay concludes the composition. Apparently Albert also tried singing games , but they are all lost.

For the famous folk song Ännchen von Tharau , Albert created a first, little-known setting. The text is by Simon Dach . Walther Ziesemer (supported by Joseph Müller-Blattau ) at times took the view that the text had also been written by Albert, but withdrew this thesis again. According to the current state of research, there is no doubt about Simon Dach's authorship. Today the song is mostly sung in the High German text version by Herder and based on the melody by Friedrich Silcher .

In the foreword to the third volume of his arias, Albert writes that he has supplemented or filled in some of his unison figured bass songs to five-part. Posterity judged: “Albert's strength was in the invention of simple, beautiful, atmospheric melodies, he is far weaker in the counterpoint ; but his 3-part movements are usually better worked than the 5-part, in which there is not much to be found of the individual development of the vocal life. "

He tried to protect his compositions against pirated prints such as the poetic-musical Lustwäldlein from 1648 through ducal Prussian and royal Polish privileges .

God of heaven and earth,
Father, Son and Holy Spirit,
who lets it be day and night, bids
us shine sun and moon,
whose strong hand
keeps the world and what is inside.

God, I thank you from the bottom of my heart
that you guarded me
from danger, fear, hardship and pain that night
and guarded me
that the evil enemy cunning was
not mine.

Konrad Opitz founded the Heinrich Albert Choir in Königsberg in 1933. The boys' choir sang madrigals , sacred music and folk songs . From 1935 he took part in music festivals . In 1938 he was a guest in the Baltic States , in 1942 he made a trip to Germany. After the air raids on Königsberg , most of the choir and the Königsberg radio play group that was associated with it went to Prague. In 1947 the choir went on a concert tour to Berlin. He had his last public appearance in 1951. In 1982 the choir sang at the Königsberg meeting in the Museum Stadt Königsberg in Duisburg.

The Heinrich Albert Duo has existed since 2003.