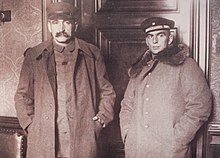 Heinrich Laufenberg studied philosophy and economics at the University of Rostock and did his doctorate on the subject of the historical value of the Panegyricus of Bishop Ennodius . After completing his studies, he was a member of the Catholic Center Party from 1902 . He also worked as an editor for Germania magazine. After a long stay in England to study Marx and Engels and the philosophy of Joseph Dietzgen , he broke with political Catholicism and became a member of the Social Democratic Party in 1904 and was editor of the Düsseldorfer Volkszeitung until 1907 . Since 1904 he was married to Martha Emma Berkholtz. During this time he published various anti-clerical writings.

In May 1907 Laufenberg moved to Hamburg, where, on the recommendation of Franz Mehring, he was commissioned by the Hamburg SPD executive committee to research the history of the Hamburg labor movement as a party historian. In 1911 he published Volume I of the history of the workers 'movement in Hamburg, Altona and the surrounding area , which is the first attempt at a comprehensive historical appraisal of the workers' movement in Hamburg. Volume II was not to be completed until 20 years later, shortly before his death. In Hamburg he was particularly involved in the training work of the Hamburg Social Democrats. In 1912 Laufenberg became head of the SPD's Hamburg party school. In the same year Laufenberg had to resign from his party offices because of his radical views. At the outbreak of the First World War , he belonged to the wing of the radical left, which turned massively against war credits. From 1914 on he worked closely with Fritz Wolffheim, bringing together politically strongly communist but also syndicalist ideas.

In particular, the publications of Anton Pannekoek (1873–1960), who appeared under the pseudonym “Karl Horner”, and Herman Gorters (1864–1927) had introduced the council communist idea into German social democracy. In addition, Fritz Wolffheim had been in contact with the revolutionary-syndicalist Industrial Workers of the World , founded in Chicago on June 27, 1905, since 1912 . Laufenberg and Wolffheim published their joint memorandum Imperialism and Democracy - A Word on World War I in August 1914 , which turned against the " Burgfriedenspolitik " of the social democracy, which had committed itself to arguments with other parties and any agitation for the duration of the war to renounce against the imperial government .

From 1916 Laufenberg maintained close contacts with Johann Knief in Bremen, who published the journal Arbeiterpolitik there . At the same time, Laufenberg and Wolffheim published the magazine Kampf in Hamburg.

During the November Revolution, Laufenberg was from November 11, 1918 to January 20, 1919 as a representative of the radical left chairman of the Hamburg Workers 'and Soldiers' Council , which was formed on November 8th. This also consisted of three representatives each from left-wing radicals, the USPD, SPD and trade unions and 18 representatives from the companies. On November 12, the Workers 'and Soldiers' Council decided against the votes of the SPD representatives to take over political power and to dissolve the citizenship and senate. This made Laufenberg the most powerful man in Hamburg almost overnight - the "red dictator", as the bourgeois press soon scolded him.

In the course of the November Revolution, revolutionary shipyard workers protested against the policies of the SPD and occupied the trade union building in Hamburg on January 9, 1919 . On the same day Laufenberg had the union offices occupied and their coffers confiscated. In the following days, on Karl Henses and Paul Neumann's initiative, workers close to the SPD demonstrated and pushed through new elections for the workers 'and soldiers' council. After his unsuccessful attempt to push back the workers' associations in favor of the workers' and soldiers' council, Laufenberg had to resign on January 20, 1919.

From December 16 to 20, 1918, Laufenberg took part in the 1st Reich Congress of Workers 'and Soldiers' Councils in Berlin, where the majority of the delegates voted for the election of a national assembly , thus de facto rejecting the council system. At this congress, the SPD ( MSPD ) had a clear majority with 296 delegates. The USPD faction consisted of 96 delegates. The minutes of the meeting noted: “On Wednesday December 18th, under the chairmanship of Dr. Heinrich Laufenberg, (...) the faction of the ´United Revolutionaries´ to which 11 delegates assigned themselves “.

After the founding of the Communist Party of Germany (KPD) on January 1, 1919, Laufenberg, along with Wolffheim and Otto Rühle, was one of the left-wing extremist opposition leaders in the party. In the following period Laufenberg developed the " national Bolshevik " idea with Fritz Wolffheim . On the so-called Heidelberg Convention, which took place in the period from 20 to 23 October 1919, Laufenberg was expelled from the Communist Party because he voted in the union question for a participation in existing unions and independent for the establishment of economic fighting organizations of the working class expressed . This was interpreted as syndicalism by the Leninist wing of the KPD . In addition, Laufenberg rejected parliamentarism as a form of struggle and participation in elections. In November 1919 Laufenberg was because of a campaign against the Treaty of Versailles by a court martial to one year imprisonment sentenced. Laufenberg continued the fight against the KPD under the pseudonym Karl Erler .

On April 3rd and 4th, 1920 Laufenberg was a co-founder of the Communist Workers' Party of Germany (KAPD). On August 14, 1920 he was expelled from the KAPD because of his "national Bolshevik ideas" and founded the "League of Communists". In 1921 there was a separation from Wolffheim, who turned to nationalist - national revolutionary circles. In 1922 Laufenberg withdrew from active politics because of serious illness. He set up a small print shop in Hamburg. In 1923 he was editor of the magazine Weg und Ziel - organ for German construction . In 1927 he was co-editor of the magazine Harpune - monthly for cultural radicalism and distanced himself from orthodox Marxism with the article: "Karl Marx, the idealist of the materialistic conception of history" ( Die Harpune No. 2, p. 11ff).

Laufenberg died completely impoverished and in poor health on February 3, 1932 in Hamburg. In an obituary of the Kampffruf , organ of the Communist Workers' Union of Germany , he was honored as a staunch opponent of National Socialism.