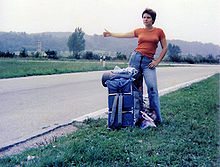 The term hippie trail ( English trail 'path', 'track') describes the travel routes of the hippies in the 1960s and 1970s from Europe overland to South Asia . The travel culture of the hippies later became the model for numerous backpackers .

Many travelers on the hippie trail were driven by the ideas of self-discovery , search for meaning and communication with other peoples that formed the basis of the hippie movement. Western Europeans, North Americans, Australians and Japanese made up a large proportion of the travelers. Ideas and experiences were exchanged in well-known accommodations and hotels along the route, for example in the pudding shop in Istanbul or the Amir Kabir in Tehran . Most travelers were young backpackers, although older travelers or families occasionally made such trips.

One of the hallmarks of this was the desire to travel as cheaply as possible, which is why hitchhiking was popular. There were cheap private bus connections and public train connections for the route sections through Eastern Europe and Turkey (see also InterRail ) to Tehran or Mashhad in Iran . Occasionally, however, people drove the entire route by car, motorcycle, mobile home or a habitable VW bus , also known as a hippie bus .

The hippie trail led many travelers from Europe to the Middle East.

Since individual travel guides were not yet available or hardly available and travel tips were mainly based on experiences passed on orally, the hippie trails concentrated on specific travel destinations and similar routes. In the late 1960s, several hippies were initially drawn to Ibiza and Morocco . However, in order to curb the influx of individual travelers, the Moroccan government tightened the entry regulations at the end of the 1960s.

The trips to Asia often started in different European countries. Travelers from the USA often used Icelandair, which was known at the time for particularly cheap transatlantic flights, and landed in Luxembourg . The other stops were about Istanbul , Tehran , Kabul , Peschawar and Lahore with the final destinations Goa , Dhaka , Bangkok or Kathmandu . An alternative route led via Turkey, Syria and Jordan to Iraq and Iran and further east. Further trips to South India , Sri Lanka and even more eastern destinations were also undertaken.

Two political changes in 1979 made the overland route impassable. The Soviet Union invaded Afghanistan and the Shah was overthrown in the Islamic Revolution in Iran. It was no longer possible to travel along the old Silk Road .

With the end of the First Gulf War , Iran became passable again on the basis of a transit visa at the beginning of the 1990s and few backpackers traveled to India on the Istanbul – Tehran – Isfahan – Zahedan – Quetta – Lahore route . This alternative route, which bypasses Afghanistan in the south, can be traveled (2010), but leads through a crisis region in eastern Iran and through Pakistan, where attacks can occur in parts of the country.

Numerous hippies gained their first travel experiences on Ibiza and Formentera . The islands became hippie strongholds, while mainland Spain was mainly shaped by the dictatorship of Francisco Franco . The band Pink Floyd composed the soundtrack for the hippie film More - more - more and more in Ibiza . The Las Dalias hippy market, whose origin goes back to the hippie trail, is a tourist attraction. While Ibiza was particularly popular as a party island, travelers in search of nature and solitude mostly moved on to Formentera. The musician Bob Dylan is said to have lived in a mill on Formentera for a while. One of the best-known meeting places for dropouts in Formentera is the Fonda Pepe restaurant.

The hippie trail to Morocco also became known through the travels of musicians such as Jimi Hendrix and the Rolling Stones or a tour by the band Embryo . The country was also popular as one of the main marijuana growing areas. A popular meeting place was the Cafe Hafa in Tangier , which opened in 1920 . At the end of the 1960s, however, long-haired men were denied entry in the wake of the growing hippie tourism .

Afghanistan was one of the most popular travel destinations for hippies from 1969 until the acid revolution in 1978 because of its scenic and cultural fascination and also because of the availability of easily available and inexpensive drugs such as hashish , opium and heroin . The most popular meeting places in Kabul were Chicken Street and the Sigis Restaurant located there, or the Green Hotel, which later burned down.

Around 400 hotels in the lower price range have been set up in the capital Kabul, where around 70,000 hippies pass each year. The country generated about ten million US dollars annually with hippie tourism. As travel increased, so did drug trafficking and the number of foreign drug deaths, particularly from the UK . The British cemetery in Kabul , the only Christian cemetery in Afghanistan, has burial sites for the drug victims.

In the capital Kathmandu , a street nicknamed Freak Street commemorates the thousands of hippies passing through. The country was very popular not only because of its interest in Hinduism and Buddhism, but also because of the legal trade in hashish and marijuana until 1973 .

India, and especially the small Portuguese state of Goa , was the final destination of many travelers. Several travelers to India were influenced by Hinduism , gained spiritual experiences in ashrams , joined the International Society for Krishna Consciousness or tried a life as a sadhu . Some hippies stayed as emigrants in places like Arambol , Anjuna or Palolem .

In mid-February 1968, The Beatles also traveled with their wives to Rishikesh , where the Maharishi held a meditation course lasting several weeks. Other participants were Mia Farrow , Mike Love and Donovan .

In Anjuna, the weekly hippie market, which extends over 13.5 hectares, is a permanent fixture and attraction.

Several travelers contributed to the popularization of piercings in Western culture on their return home , having been inspired by nostril and ear piercings in India . The Goa culture, influenced by emigrated hippies living in India, from which the music genre psytrance later developed, is connected with the ideas and symbols of the 1968 movement and has been a subgroup of techno culture since the 1990s .

The hippie trail is sung about in the song Down Under by the Australian band Men at Work . There it says in the first stanza:

Traveling in a fried-out kombi
On a hippie trail, head full of zombie
I met a strange lady, she made me nervous
She took me in and gave me breakfast
And she said,
Do you come from a land down under?
Where women glow and men plunder?
Can't you hear, can't you hear the thunder?
You better run, you better take cover.