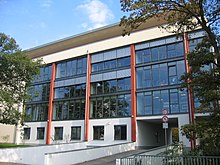 The IUBH International University is a private , state-recognized university of applied sciences .

It offers English-language face-to-face courses, dual German-language study programs as well as part-time and distance learning courses in German and English. The university is run by IUBH Internationale Hochschule GmbH, whose sole shareholder is Career Partner GmbH. The current name of the university goes back to the original English-language name International University of Applied Sciences Bad Honnef - Bonn .

The university was founded in 1998 and started operating in 2000. It is divided into four independent areas: the IUBH Campus Studies with an international management orientation, the IUBH distance learning, the IUBH part-time study and the IUBH dual study.

All current courses are state-accredited (or currently in the accreditation process), bear the seal of the German Accreditation Council , are certified and have received various awards, e.g. B. the premium seals of FIBAA . The IUBH is also the only German university in the " Hotel Schools of Distinction " association. She is a member of the academic network of the Global Compact and the Principles for Responsible Management Education (PRME) of the United Nations .

The courses offered in the dual study program include dual bachelor's and master's programs in the fields of tourism, health & social affairs, transport & logistics, IT & technology, business & management, media & communication and human resources. By regularly switching between theory and practice, students can simultaneously gain work experience in a company during their studies.

The range of distance learning courses includes German and English-language Bachelor, Master and MBA distance learning courses with specializations for various industries and areas of responsibility. All offers can be studied in modules: full-time or part-time, digitally through scripts, video lectures and online tutorials or sometimes with face-to-face participation. Students take exams in one of the more than 40 examination centers in Germany, Austria and Switzerland, at one of 150 international examination centers worldwide or via online exams.

The IUBH offers extra-occupational study programs with a combination of face-to-face and online courses .

The IUBH is a privately owned university whose courses are not financed by the state. For this reason, fees are charged for the study. There are different payment, financing and scholarship models to finance the tuition fees.

The IUBH was founded in Bad Honnef in 1998, and teaching began in 2000. In July 2007 the university was taken over by the private equity firm Auctus ( Munich ). In 2008 the IUBH opened a second location in Bad Reichenhall . In July 2009 , the Science Council re-accredited the university institutionally for ten years. Since November 2011, the IUBH has been offering distance learning courses for Bachelor and Master degrees. In mid-2013, the IUBH merged with the Adam Ries University of Applied Sciences and thus expanded the IUBH's university offering to include the dual study model. With the establishment of the IUBH Corporate Program in 2014, the Rectorate was expanded to include the position of Vice Rector for corporate programs. On December 10, 2015, Career Partner GmbH was taken over by the Apollo Group as the parent company of IUBH , and Career Partner GmbH has been part of the British private equity investor group Oakley since November 2017. In March 2016, the IUBH merged with the University of International Economics & Logistics (HIWL) and has since been offering dual courses in Bremen under the name IUBH.

The IUBH International University offers around 100 Bachelor, Master and MBA courses in the following areas:

The university started its operations in 1998 in the “ Feuerschlößchen ”, the former residence of Wilhelm Girardet , north of Bad Honnef city center. In 2000 she moved to the former site of the St. Anno commercial school south of the city center on the western edge of the Beuel district , which stretches between Mülheimer Strasse in the north, Linzer Strasse in the west, Fuckengasse in the east and Ohbach in the south. The historic buildings, which are listed as historical monuments , form the center of the campus. In 2005 it was expanded to include two new dormitories and a new cafeteria. In February 2007 a new administration building with a library (200 places), 15 seminar rooms for around 400 students and 18 offices were inaugurated.

The castle-like structure of the former St. Anno commercial school, which has a tower, goes back to the medieval “bishop's court” of the Archbishopric and Electorate of Cologne . It was the seat of an Electoral Cologne bailiff and served as a winery ("Tafelgut"), which supplied the Electoral Cologne state in particular with wine. The Cologne elector and archbishop had his own court there , whose district he tried to expand against the resistance of the Lords of Löwenburg . After secularization through auctioning in 1826, the former bishop's court belonged to the Ditges family from Cologne until 1917, who rebuilt the tower in the neo-Gothic style, expanded the court and ran a guesthouse in it. In 1927 the school brothers of St. Johannes de La Salle from the Maria Tann monastery in Kirnach / Villingen and set up an alumnate (student residence) for the municipal high school there. During the Nazi era , the facility was closed in 1941, confiscated by the Secret State Police (Gestapo) and the school brothers expelled. In 1946 the school brothers reopened it as the St. Anno commercial school - named after the Archbishop of Cologne, Anno II. - with boarding school, which was officially recognized as a public commercial school in January 1949. In 1953 an extension was built. In 1987 the school was closed. The annexes from the 19th century, which are not listed, were removed during the renovation for the university.

In Düsseldorf, the IUBH's dual study department is located in the former Haribo building, which is now a listed building.

Literature on the historical building