Igoumenitsa ( Greek Ηγουμενίτσα ( f. Sg. ); Albanian  Gumenicë / -a ) is a municipality in the regional district of Thesprotia in the Greek region of Epirus . In addition to the core city, the community consists of 24 settlements in a total of five districts.

Igoumenitsa is about 480 kilometers from Athens and about 380 kilometers from Thessaloniki . The city in the far north-west of Greece near the border with Albania has a ferry port on the Adriatic Sea , which calls at daily from Italy ( Bari , Brindisi , Venice and Ancona ) and from inland Patras across the Ionian Sea . It provides the connection to the islands of Corfu , Paxos and Andipaxos . In addition, the Egnatia Odos ( A2 ) motorway begins here , which extends from Igoumenitsa to just before the Turkish border.

Igoumenitsa was probably settled by the Thesprotians in ancient times. Settlement by Dorians cannot be ruled out either. Igoumenitsa belonged to the Ottoman Empire until 1913, the first Balkan War .

Around the turn of the 20th century, the city experienced an increase in importance, probably also because of its strategically exposed location vis-à-vis Italy and Greece, which resulted in the establishment of the Sanjak Çamlık in 1909 (derived from the Albanian name of the area Çamëria and its inhabitants, the Çamen ) expressed. The town, previously known as Gomoniçe out, was in honor of the new Sultan Mehmed V. Reşad in Reşadiye renamed and capital of Sanjak, who is also the Kazas Margaliç (now Margariti ) with the city of Parga , Aydonat (now Paramythia ) and Filât (today: Filiates ) included. The last Mutasarrif , Mahmud Ekrem Bey from the Libohova-Aslanpaşalı family, withdrew to Albania after a futile defense against the Greeks in the 1st Balkan War. He then fought on the Albanian side against the Greek troops and played a political role there under the name Eqrem Libohova . His political career took him through various ministerial posts to the office of Prime Minister of Albania.

After the city fell to Greece in the 1st Balkan War, it lost its importance and sank again to an insignificant settlement on the periphery of Greece.

Until 1936, when it became the capital of the Greek prefecture of Thesprotia , Igoumenitsa was a small fishing village with about 500 inhabitants. In 1944 it was completely destroyed when the German Wehrmacht withdrew and then rebuilt after the end of the war. Only the establishment of a ferry connection to Brindisi in 1960 and the creation of efficient road connections into the interior of Greece led to a renewed upswing.

In the local elections in 2014 Ioannis Lolos was elected 1st Mayor of the city by the party "Strong Perspective" (Δυναμη Προοπτικης) with a little more than 38% of all votes counted.

Igoumenitsa has had a town partnership with the German town of Velbert since 2012 . The partnership is based on the slogan “Learn from each other - live together” and should cultivate friendly contacts with each other. Citizens, clubs, schools and organizations are called upon to consolidate the partnership according to this motto. In the founding year of the city partnership, the first partnership association, FILIA Velbert, was founded to promote both cities.

Igoumenitsa is the gateway to the west for north and north-west Greece. Until the mid-1960s, only smaller ships could dock in the port. Since the harbor basin deepened, it is also suitable for large ferries. The city developed into the most important port for connections to Western Europe, especially Italy. Several million travelers pass through the city every year. It has one of the largest growth rates in Greece. As part of the expansion of the port capacities, a new, large ferry port was built in the south of the city on the southern part of the bay of Igoumenitsa, which has a direct motorway connection. 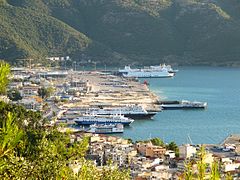 View of the new ferry port

Today ferries run daily to Ancona , Brindisi , Bari and Venice , as well as to Patras and Corfu within Greece . The highway 2 ( European route 90 ) connects Igoumenitsa continuously with Ioannina and in its further course with Thessaloniki. The old two-lane national road 6 ( Europastraße 92 ) will be replaced with the full commissioning of Autobahn 2 as the main mode of transport in the east direction. To the south, the national road 6 ( European route 55 ) leads first inland to Parga , then along the coast to Preveza . As part of the construction of Highway 2, the southern part of Igoumenitsa was given a bypass.

Plans for a railroad to Kalambaka have been presented several times; a specific planning study for the 165 km long route has been commissioned. Igoumenitsa does not have an airport.

In Igoumenitsa there is a health center and a connection to the Filiates hospital . Several pharmacies take turns on night duty.

In Igoumenitsa there are several primary schools, high schools, a lyceum, the Epirus Technical Training Institute and a branch of the University of Ioannina . Since the establishment of the university a few years ago (it moved into the former Hotel Xenia after extensive renovations and extensions), the city has expanded considerably. Igoumenitsa has a noteworthy library.

Besides appearances at local events, the cultural association PODI (Π.Ο.Δ.Η.) represents Thesprotia every year in Athens at the panepirotic dance and music festival.

Municipalities of the Epirus Region