The indigenous population of Brazil comprises a multitude of different ethnic groups who inhabited the area of ​​what is now Brazil even before the Portuguese conquered it in 1500. Brazil is the country with the most uncontacted tribes in the world.

Origin of the indigenous population of Brazil

According to the most popular theory, the origin of the indigenous peoples of Brazil lies in Asia . During the last ice age about 30,000 to 40,000 years ago, people migrated to North America via the Bering Strait and settled the continent. There was probably also a small part of immigration from Southeast Asia and Melanesia . In the course of time they came to South America via the narrow strip of land that is now Panama . a. also to Brazil. The country was reached about 10,000 years ago.

However, recently discovered stone paintings and remains of settlements refute this theory and assume that the indigenous population of Brazil can be traced back to 50,000 years ago. Archaeological finds have been discovered in Piauí that are around 60,000 years old. Other sites extend into the Argentine pampas , where the finds are estimated to be over 10,000 years old. A discovery of human bones over 11,000 years old in Santa Luzia (Minas Gerais) in 1976 also supports this new theory. The skeleton clearly shows Polynesian features, which indicates a population from the South Pacific region. These circumstances call for an extension of the theory previously accepted.

The most decisive event in the history of the Brazilian peoples is the arrival of the Europeans around 1500 and the subsequent colonization of America. At that time, there were an estimated 1,000 peoples composed of five million people. Today there are only 350,000 indigenous people living together in around 215 peoples.

The first contacts between Europeans and indigenous people in the first years of the 16th century were relatively peaceful, as they were dominated by curiosity about the foreign and the exchange of local goods. Relationships (mostly without an official marriage) between Portuguese and locals or slaves were not uncommon and so a "fusion" of ethnic groups and cultures began early in history. A list of the indigenous peoples still to be found in Brazil can be found at the end of this entry.

After the first contacts, however, the indigenous people began to be enslaved by the overwhelming power of the European population. As a result of the contacts and introduced diseases against which the local people had no defenses, their number decimated drastically over time. As early as the 17th century there were so few indigenous people that slaves were imported from Africa to meet the demand. Missionaries settled the indigenous peoples and converted them to Christianity . In addition, the clergy wanted to protect the people, so that under their pressure, slavery was banned in 1609. Two years later, due to the country's economic problems, it was reintroduced. Deadly epidemics frequently occurred in the settlements, which were becoming more and more crowded. By the end of the 17th century, entire areas of the Amazon were depopulated. Slavery was banned again in 1755, but because the Jesuits who wanted to protect the indigenous peoples to the last were expelled at the same time, many people continued to suffer from forced labor. In 1808 slavery was allowed again in the south of the country and lasted until the end of the 19th century.

At the beginning of the 20th century, the number of the purely indigenous population of Brazil fell below one million for the first time. The rubber boom also contributed to this, as a result of which tens of thousands of members of indigenous peoples were killed by violence and slavery. By clearing the rainforest, their habitat is becoming increasingly smaller. The slash and burn of the rainforest is also responsible for epidemics, resettlement and the destruction of their culture.

One example is the Guarani , who are the largest people in the country. Before contact with the Europeans, their number was 1.5 million; today there are only 30,000 Guarani left in Brazil. The Guarani are in search of the evil land to live in peace and have therefore settled in a number of places. Today they can be found in seven states of Brazil. With the loss of their land to European settlers, the people's suicide rate rose and is now one of the highest in the country.

The rights of the indigenous peoples of Brazil are regulated by law, but are often disregarded. To protect the indigenous peoples of Brazil, the FUNAI (Fundação Nacional do Índio) authority was founded in 1901 by Cândido Rondon as " Serviço de Proteção ao Índio " (SPI for short; German: Service for the Protection of Indians). Despite the good motives, the organization often failed to protect the indigenous population. Rondon was also the first chairman of the foundation until 1930 . The SPI became FUNAI in 1967 and is subordinate to the Brazilian Ministry of Justice.

Integrated indigenous people are classified as those who live according to the customs and nature of the western population, i.e. use money as a means of payment, speak Portuguese, live in cities or towns, drive a car, work as employees, etc. As isolated indigenous people are classified as those who have no or have infrequent contact with mainstream society, live according to its rites and customs and who are not or little familiar with Western manners. Isolated indigenous people are legally not able to act, they are patronized by the state . Legal transactions that are concluded by strangers with these people are not legally valid, unless the indigenous person has understood the entire scope of the transaction and no disadvantages have arisen or will arise from it. An "isolated indigenous" cannot be prosecuted under criminal law . If he commits a criminal offense, an anthropologist must nevertheless clarify whether he is sufficiently “civilized” that he knew the criminal nature of his act according to “Western customs”. For crimes committed by "isolated indigenous people" in their own environment or among their people, the "Indian Statute" tolerates the jurisdiction of the relevant people. This means that the people can hold their own judgment, but the "Indian Statute" prohibits cruel punishments such as the death penalty. "Integrated" indigenous peoples are subject to the current case law of the Brazilian state, whereby the "Indian Statute" provides that people convicted of criminal law can serve a sentence in semi-detention and in a branch of the FUNAI, which is geographically close to the place of residence of the convicted person. Fully integrated indigenous peoples serve a sentence like other convicts. In addition to the anthropological opinion, the judge in question has a great deal of leeway for his own discretion.

Even today, indigenous peoples who avoid any contact with the “outside world” due to bad experiences are regularly discovered in Brazil. In many cases, this happens when flying over the Amazon rainforest at low altitude or because of information that neighboring groups provide to the responsible authorities or non-governmental organizations. Most recently, in mid-June 2011, authorities confirmed the existence of a previously unseen isolated people with around 200 members. The village is located in the Javari Valley near the border with Peru and was sighted by FUNAI during an overflight over the area.

The difficulty in categorizing the Brazilian indigenous peoples is that during the five centuries since the country's colonization began, the indigenous people have often been forced to give up their ancestral culture and way of life. The destruction of their habitats in the jungle, the ban on their religion and resettlement, to name just a few factors, contributed to this leveling of character between the ethnic groups.

Today there are around 200 to 220 different indigenous ethnic groups living in Brazil. Below is a list of some of the indigenous groups. 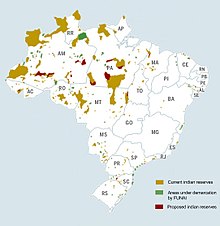