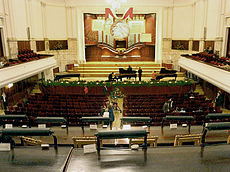 The International Chopin Competition ( Polish : Międzynarodowy Konkurs Pianistyczny im. Fryderyka Chopina ) is one of the oldest and most prestigious music competitions in the world. It is also one of the few piano competitions dedicated to the work of a single composer.

The main idea of ​​the competition is to promote young pianists , the participants are allowed to be 17 to 28 years old. There are lucrative contracts waiting for the winners in the best concert halls.

The first competition took place in the Warsaw National Philharmonic in 1927 , and the initiator is the Polish pianist and pedagogue Jerzy Żurawlew . Further events took place in 1932 and 1937; after the interruption due to the war, the competition was held in 1949 and 1955. The competitions have been held every 5 years since 1955. The event has been part of the World Federation of International Music Competitions since 1957 and has been organized by the Chopin Society since 1960 .

In 1980 Martha Argerich , member of the jury and former winner, resigned her mandate during the competition after the participant Ivo Pogorelich did not make it to the final.

In 2015, the final of the candidates was recorded for the first time by Deutsche Grammophon with the intention of publishing the winner's contribution as a sound carrier. The competition was recorded in its entirety by six cameras and broadcast live on Polish television , on the Internet and as a public viewing on large screens in Warsaw.

The competition originally planned for 2020 was canceled due to the corona pandemic and will instead take place in 2021.

Applicants will submit a video recording of the compulsory repertoire of the 1st round of the competition in order to qualify for the elimination round. In 2015 there were 445 submissions from applicants from 27 countries, 160 of which were invited to Warsaw for the preliminary round. In 2015, pianists from the Far East dominated the qualifiers, especially from China (26), Japan (25) and South Korea (24). Applicants from Poland (21), Russia (11) and the United States (11) also qualified. One pianist each from Germany and Switzerland applied.

Of the 160 applicants invited, 80 qualified who were invited to the first round of the actual competition. Four applicants were placed who had already been among the top three winners in other competitions. Ultimately, 78 pianists took part in 2015. The pianists can choose which grand piano they want to play on. Each applicant has 15 minutes to do this. In 2015 you could choose between Steinway , Yamaha , Kawai and Fazioli . 43 candidates remained for the second round and 20 candidates for the third round. 10 pianists were finally allowed to take part in the final round.

The Polish President at the concert of the laureates; 16th International Chopin Competition in Warsaw, October 21, 2010

A repertoire of Chopin works is prescribed for each round, from which the candidates can choose works they want to perform. If the prescribed time is not filled, the repertoire can be supplemented with one or more Chopin works. However, the pieces may not be repeated in the individual rounds.

In the final round, the selection consists only of Chopin's two piano concertos:

In 2015 nine candidates decided to perform the 1st piano concerto, one applicant chose the 2nd piano concerto. You play with the Warsaw Philharmonic Orchestra with a changing line-up, but with the same conductor ( Jacek Kaspszyk ).

Sold out concert hall of the Warsaw Philharmonic at the Chopin Competition 2015. The 17-member jury sits in first place in the middle.

A tradition of the competition is the award of special prizes by the jury:

Szymon Nehring (Poland) won the 2015 Audience Award , which was determined through an online vote.

The XVIII. The Fryderyk Chopin International Piano Competition was to take place in Warsaw from October 2nd to 23rd, 2020.

People between the ages of 16 and 30 can participate. Applications should be sent to the Fryderyk Chopin Institute by December 1, 2019, along with the required documents (including a DVD recording of the pieces the pianist would like to perform in the first phase). After examining and evaluating the submitted materials, the qualification committee appointed by March 9, 2020 selected a list of around 160 pianists who were admitted to the qualification exams. The eliminations should take place on April 13-24, 2020. The jury, appointed after the public hearing of the candidates, was to select around 80 pianists by April 25, 2020, who should be admitted to the main competition in October.

Due to the COVID-19 pandemic, the elimination was initially postponed to September 18-29, 2020. A record number of over 500 applications were submitted for the 18th Chopin Competition. 164 pianists from 33 countries qualified for the preliminary round, including 18 artists who were admitted by winning prizes in the piano competitions specified in the regulations. The most numerous are representatives from China (34), Japan (31), Poland (19) and South Korea (16); with several participants from Italy, Russia, the USA, Canada and France. The jury has selected around 80 pianists who are allowed to take part in the competition. Their names were announced immediately after the elimination.

The winners of some prestigious piano competitions will be admitted to the main competition without the need to appear in the qualifying rounds. The following were selected:

Due to the COVID-19 pandemic, the 18th Chopin competition has been postponed to 2021. An execution without a spectator was rejected. The competition will take place in the Warsaw Philharmonic from October 2 to 23, 2021. The Polish Minister of Culture and National Heritage, Piotr Gliński , and Artur Szklener , Director of the Fryderyk Chopin Institute in Warsaw, decided, after additional consultations with the Polish Ministry of Health , to postpone the competition from October 2020 to October 2021.

All tickets for the 2020 Chopin Competition were sold out in just three hours. All tickets purchased for the sold out event remain valid. However, tickets can be returned:

Should tickets for the Chopin competition be returned, an option to sell the additional ticket contingent in 2021 will be considered.

The list of pianists already accepted for the competition remains unchanged. The elimination rounds will take place from April 17th to 28th, 2021.

The competition tests are divided into three stages, from October 3rd to 7th, October 9th to 12th and October 14th to 16th. The final concerts are planned for October 18-20. From October 21 to 23, three winners' concerts will take place.