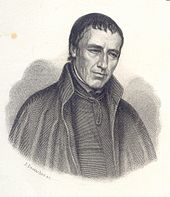 The Roothaan family has its origins in Frankfurt am Main . From there she emigrated to Amsterdam, where she converted from the Protestant to the Catholic faith. Roothaan was the son of the surgeon Matthias Egbert Roothaan and his wife Marie Angela Ter Horst. He attended high school in Amsterdam , which he successfully completed at the age of 16. He then switched to the Athenäum illustrum , a kind of private university, to Prof. Jacob van Lennep .

On June 30, 1804 Roothaan entered the order and began his novitiate in Daugavpils . On June 21, 1806 he made his profession and worked at the grammar school there until 1809. Roothaan then studied philosophy and theology at the Polotsk Order Academy .

In January 1812, Roothaan was ordained a priest and was appointed as such in the same year as professor of rhetoric at the Pusza religious college . From 1816 to 1820 he worked at the college in Orscha . In March 1820 all members of the order were expelled from Russia.

His twelve-week escape came to an end in Brig, Canton Valais . There Roothaan found a new field of activity as a lecturer. After various administrative tasks, he was appointed head of the college in Rome with effect from June 22, 1823.

The most important task in his new office was the stabilization of the order, which was only allowed again in 1814 by Pope Pius VII . He tried to achieve this primarily through an upgrading of the role of the Ignatian retreat , as it was never known in the original Society of Jesus. For this purpose, he obtained a new edition of the retreat with commentary, which, in parallel to the traditional Latin version, also contained a new Latin translation that is much closer to the original Spanish text. During the revolution of 1848 Roothaan had to leave Rome. He used this circumstance for a visitation trip through almost all of Europe .

Only at the end of January 1850 could Roothaan return to the mother house of the order. After a long and serious illness, Roothaan died on May 8, 1853 at the age of 67. He was succeeded by Pierre Jean Beckx .

Since Joannes Phillipus Roothaan had the reputation of a saint among large parts of the population, a beatification was initiated in the Vatican in 1927 .

Superior General of the Society of Jesus