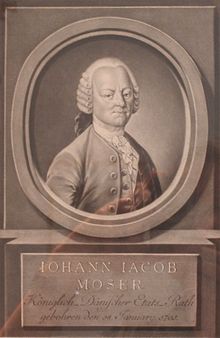 Johann Jacob Moser (born January 18, 1701 in Stuttgart ; † September 30, 1785 there ) was an important Württemberg constitutional law teacher and, with the title of landscape consultant, legal advisor to the Württemberg states .

Johann Jacob Moser came from the Moser von Filseck family , who belonged to the "old Württemberg honesty ", i.e. the evangelical , pietistic , bourgeois , class civil servants and pastors milieu of the Duchy of Württemberg . Early on (1716) he lost his father, Johann Jacob Moser von Filseck (* 1660 in Stuttgart), accountant of the Swabian district. The mother Helene Catharine (née Misler, * 1672 in Stade , † 1741 in Stuttgart) now had to support him and six siblings and was only able to give him an academic career under extreme restrictions.

In 1721 he married Friederike Rosine Vischer, daughter of the Württemberg councilor Johann Jakob Vischer (1647-1705) . Their eldest son was Friedrich Karl von Moser , born in Stuttgart on December 18, 1723 , a lawyer like his father, a political writer and statesman.

In his three-year, mostly autodidactic study of law at the University of Tübingen , he turned to the ius publicum , in particular Reich journalism , and was appointed professor extraordinary at the Faculty of Law at the age of 18. However, the income associated with this turned out to be insufficient, so that he had to look for other employment opportunities.

From 1721 to 1726 he first tried his hand at Vienna. In 1724 he became an advisor to the Reich Vice Chancellor Count Schönborn in matters relating to the Reich. However, he was denied a career in the imperial service, also because he refused to convert to the Catholic faith.

In 1726 he returned to Stuttgart, where he became a real councilor and in 1727 was appointed professor at the Tübingen Collegium Illustre . However, there were disputes with the ducal censorship , so that he resigned the professorship in 1732 and at the same time resigned as a councilor. During this crisis his personal turn to pietism also took place.

In 1736 he became Professor Juris Primus Ordinarius at the University of Frankfurt an der Oder , the second largest Prussian university after Halle . But here too, after a short time, he got into difficulties with his colleagues and the Berlin administration, so that he resigned in 1739. He now lived as a private person in Ebersdorf in the Vogtland in the local pietistic community, where he wrote the German state law . In 1747 he joined the Moravian Brethren of Count Nikolaus Ludwig Graf von Zinzendorf and shortly thereafter, in 1747/1748, joined the Landgrave of Hesse-Homburg as head of the office . In 1749 he became head and lecturer of a state and chancellery academy for the training of aristocrats , which he set up under the protectorate of Landgrave Wilhelm VIII of Hessen-Kassel in Hanau . He planned to reorganize it into a share- based college . Before it came to that, however, Johann Jacob Moser followed the call of the estates in 1751 in the Duchy of Württemberg as legal counsel for the landscape. Here he immediately got caught up in the constitutional conflict between the estates, who invoked their rights from the Tübingen Treaty of 1514, and the absolutist efforts of Duke Carl Eugen von Württemberg. But even with the landscape, which insisted on its old class privileges, he made himself unpopular with reform proposals to promote handicrafts, trade and the common good. During the Seven Years' War (1756–1763), the duke had troops raised to rent out individual contingents to Austria . This was contrary to the constitution , because the landscape should have given its approval. As a result, the relationship between the landscape and the duke, who perceived Johann Jacob Moser as the head of the class resistance, deteriorated. In July 1759, Moser was arrested and taken to solitary confinement at the Hohentwiel fortress without any legal proceedings .

He survived the five years of deprivation in trust in God with unbroken mental condition and physical health. In order to meet his manic urge to write, no writing materials were made available to him during this time. So he wrote religious songs on the walls with soot from the fireplace - it is said to have been several hundred. In 1764 he was dismissed on a complaint from the landscape after a resolution of the Reichshofrat . The emperor, Prussia and the countryside had stood up for him. Now 63 years old, he was reinstated as a consultant for the landscape, but retired on July 16, 1770.

During the next 15 years Johann Jacob Moser worked as a writer until the end of his life.

500–600 books, not only with legal content, but also with religious and theological subjects, come from his pen. No library in the world has brought all of its works under one roof. He was the most productive lawyer in the German language when it came to writing. This means that, on average, he produced a book about every month of his adult life. However, this “mass production” sometimes also led to unclean research and representations of facts in his works that did not stand up to scrutiny.

Johann Jacob Moser was the first to write a complete description of the positive constitutional law applicable in the old German Empire , not in the abstract according to a natural-law-philosophical system, but through a concrete description of actually valid legal norms , laws , court decisions , the origin , archival documents and the practice of the law firms . He collected the legal material found, systematized it and then presented it systematically. In doing so, he turned against deductive systems based on natural law such as those of Christian Thomasius (1655–1728) and Christian Wolff (1679–1754). The same applies to his doctrine of international law , which he derived not from natural law foundations, but from international practice. Johann Jacob Moser is considered to be the founder of German constitutional law and positive international law. He defended the traditional imperial constitution, which was composed of individual concrete legal norms and the rights, the “liberties” that they granted to individual legal entities against claims by the authorities, against what would later be defined as “ absolutism ”.

In questions of religious law, Moser took a decidedly critical stance towards the Enlightenment. In the publication Unterthänigstes Gutachten, published anonymously in 1780 , because of the current religious movements: especially in the Evangelical Church, as well as about the Imperial Commission Decree in the Bahrdtian cause , for example, he expressly spoke out against the radical Enlightenment position of Carl Friedrich Bahrdt . The critic Gotthold Ephraim Lessing dedicated an answer to this work by Moser, which has only survived as a fragment.

In addition to the Reichsstaatslehre, Johann Jacob Moser also dealt with the constitutional situation in some of the numerous territories of the empire. With their multitude and diversity, however, he could not do this with the same coherence in terms of content as he had done for imperial law. His main works are: