The new JVA with the former police headquarters 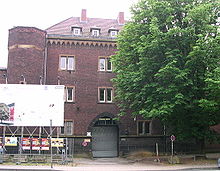 The old prison on Adalbertsteinweg, according to plans by: Robert Ferdinand Cremer , now portal to the justice center

The JVA Aachen is a prison for adult male prisoners and remand prisoners in the city of Aachen , it lies in Aachen's Soers .

The Aachen JVA currently has 684 places for prisoners on remand and convicts. In addition, there are 35 places in a closed social therapy department . Currently (January 2014) the institution is occupied with 733 prisoners. Preventive detention has not been carried out in Aachen for several years.

The correctional facility (JVA) was rebuilt between 1990 and 1994 as a replacement for the old prison on Adalbertsteinweg. The inauguration of the 106 million DM complex took place on April 25, 1995. In 2001 the building had to be expanded. This enabled the inmates of the old prison to move to the new one in 2004. In the same year, the old buildings on Adalbertsteinweg were demolished to make way for a new justice center. Only the listed entrance portal (former entrance sluice) was preserved and now serves as access to the justice center.

The Aachen JVA is responsible for the execution of:

At the end of November 2009, the Aachen JVA hit the headlines when the two serious criminals Peter Paul Michalski and Michael Karl Heckhoff managed to escape. The two were u. a. has been sentenced to life imprisonment for robbery, hostage-taking, murder and attempted murder and is considered very dangerous. A judicial officer was arrested on suspicion of freeing prisoners. The two escapes were caught again after three and five days of escape. The District Court of Aachen has the two escapees 9 February 2011 to ten and ten and a half years imprisonment followed by preventive detention condemned. The correctional officer was sentenced to four years and three months in prison. At the trial, Heckhoff and Michalski stated that the adverse circumstances that prevailed in Aachen JVA had driven them to flee.