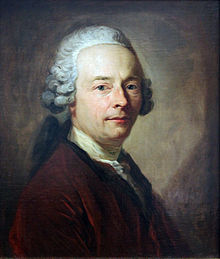 Karl Wilhelm Ramler (born February 25, 1725 in Kolberg , † April 11, 1798 in Berlin ), known as the German Horace , was a German poet and philosopher who is attributed to the Enlightenment as well as to the sensibility .

Ramler was the son of tax inspector Wilhelm Nikolaus Ramler and his wife Elisabeth Stieg. After attending school in his hometown and in Stettin , Ramler came to the Francke Foundations' college in Halle (Saale) in 1738 . He then began to study theology at the University of Halle in 1742 . Three years later he moved to Berlin to study medicine. Since he actually felt obliged to the beautiful sciences , Ramler also gave up this study. He was encouraged in this decision by Johann Wilhelm Ludwig Gleim , whom he had met in Berlin. Ramler et al. a. get a job as a tutor on the domain Lähme near Werneuchen , so that Ramler's livelihood was secured for the time being.

In 1747 Ramler settled again in Berlin and was appointed to the local cadet institute as a lecturer in philosophy in 1748 and later with the title of associate professor. honored. Ramler held this office until 1790. There in Berlin he soon made the acquaintance of Moses Mendelssohn and Friedrich Nicolai , who brought him closer to the Enlightenment and, like Ramler, belonged to the respected Monday club . Between 1750 and 1751 Ramler published together with Johann Georg Sulzer his critical messages from the realm of learning . Ramler u. a. with Johann Wilhelm Ludwig Gleim, Ewald Christian von Kleist and Gotthold Ephraim Lessing .

Together with the latter he published in 1759 the " Sinngedichte " by Friedrich von Logau . The Royal Prussian Academy of Sciences in Berlin accepted Ramler as a member in 1786, followed by membership of the Art Academy the following year . Together with Johann August von Beyer and Johann Jakob Engel , Ramler was also appointed to the directorate of the royal theater ; he held this office until 1797.

Poetry occupies a large part in Ramler's literary work . The Prussian King Frederick the Great was celebrated by Ramler in several odes , but paid no attention to the poet. His successor Friedrich Wilhelm II appointed him to the Council of the Academy of Sciences in 1786, the year of his coronation, and offered him a pension of 800 thalers. At the request of the king, Ramler was given the management of the National Theater in 1790 . He held this position until shortly before his death.

Karl Wilhelm Ramler died on April 11, 1798 in Berlin at the age of 73. He found his final resting place in the old Sophienkirchhof there (memorial plaque on the Sophienkirche ). In the Berlin district of Gesundbrunnen is Ramlerstraße named after him.

Some of Ramler's poems were set to music by musicians such as Carl Heinrich Graun , Johann Joachim Quantz , Carl Philipp Emanuel Bach and Georg Philipp Telemann . In addition to his work as a literary critic , which is still interesting today , Ramler also made a name for himself as a literary translator . He translated works by Catullus , Horace and Martial , always applying the principles of aesthetics that he had adopted from the French aesthetician Charles Batteux . These required the exact imitation of nature as the basic principle of poetry. His multi-volume edition of Martial contained the first almost complete edition of all of the poet's works; in the first volume he also collected many of the poems that Martin Opitz had translated and which he had edited. In the end, about 15% of the works were missing, which Ramler deliberately left out due to their erotic character, which was felt to be offensive at the time.

Contemporaries celebrated Ramler as the German Horace , but already fifty years later he was only a poetic drill master ; Today's literary criticism often sees him as a peddler . More recently, his transcriptions are again more valued for their high text comprehension and the fluency of the translation.

Ramler translated Batteux '"Introduction to the Beautiful Sciences" (Cours des belles lettres) , edited several works by contemporary authors according to his specifications and worked as editor. Lessing, for example, had some of his works revised by Ramler, who changed them to such an extent that Lessing almost broke his friendship with him.