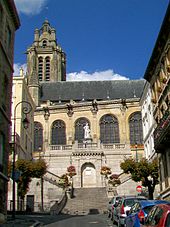 The Saint-Maclou Cathedral in Pontoise , a town in the Val-d'Oise department in the French region of Île-de-France , is the episcopal church of the Pontoise diocese , which was founded in 1966 . The church was built in the middle of the 12th century in the transition from Romanesque to Gothic and was rebuilt and expanded in the 15th century. In addition to an entombment group , the church has stained glass windows from the Renaissance . As early as 1840, the church consecrated to Saint Machutus (Maclou) was included in the list of architectural monuments in France as a monument historique .

According to a source from the 17th century, there was already a church dedicated to St. Maclou in 1090 on the site of today's cathedral. Another 16th century source mentions a chapel built in 1100 and dedicated to Saint Eustachius . The construction of the present church is dated between 1140 and 1165. The choir and the transept have been preserved from this construction phase .

In 1309 a storm caused the crossing tower and several yokes of the Romanesque nave to collapse. In the second half of the 15th century, the church began to be enlarged. The west facade from the 12th century was torn down and the nave was extended by two bays. A new facade and the two lower floors of the tower were built in the Flamboyant Gothic style. At the site of the northern apse chapel that was sacristy built.

From 1525 the north aisle of the old church was demolished and replaced by a double aisle with attached chapels. In addition, the Passion Chapel and the Renaissance portal to the Place du Grand-Martroy were built. From 1552 the tower was covered with a dome and the south aisle with its chapels was added.

In the 17th and 18th centuries, the church received a baroque interior. With the aim of adapting the church to contemporary tastes, the tympanum of the main portal and most of the leaded glass windows were removed in 1732 . Only in the Passion Chapel and in the north aisle have renaissance windows been preserved. During the French Revolution , most of the church's sculptural decorations were destroyed, and the church became the Temple Saint-Maclou and used as a meeting room.

The choir, the oldest part of the building, consists of a harmonious combination of geometric shapes. The transept is based on a rectangular floor plan, the apse is over a pentagon, the ambulatory and the apse chapels are built over a semicircle. Strong buttresses structure the outer walls. The roof approach of the transept and the apses is studded with corbels , which are decorated with human and animal heads as well as plant motifs.

The main portal and two smaller portals open in the west facade. A large rose window is cut into the middle of the facade . On the north side of the west facade rises the bell tower pierced by high, coupled sound arcades on the two upper floors . It is crowned by a dome with a lantern and reinforced at the corners by strong buttresses studded with pinnacles .

The nave is divided into seven bays. Wide arcades open from the main nave to the aisles. The capitals of the left aisle are decorated in the style of the early Renaissance with small figures and heads, the capitals on the right are Corinthian inspired. The ribbed vault from the middle of the 16th century is still preserved under the crossing . On the keystones are Trinity and evangelists with their symbols shown. The monogram F refers to the French King Francis I and the crescents to Henry II , who succeeded him in 1547.

The capitals in the ambulatory are dated to the middle of the 12th century. They have the typical Romanesque decoration: sirens , winged dragons, intertwined ribbons, heads, grimaces, acanthus leaves and fruits.

In the 19th century, the stained glass windows from the Renaissance that were still preserved were restored by various glass painting workshops and new windows were created.

The Renaissance windows in the Passion Chapel were made around 1545. The glass painter is not known. The windows depict the Carrying of the Cross, the Crucifixion of Christ, scenes from the legend of St. Fiacrius (Fiacre), the legend of St. Barbara , and the story of Susanna and the old men .

A large window from the 19th century commemorates the vow of Louis the Saint . In 1244 the king was seriously ill while staying at Maubuisson Abbey and he vowed to embark on the crusade if he recovered. The Bishop of Paris presents the King with the Crusader Cross. In addition to Louis the Saint, his mother Blanka of Castile , his wife Margaret of Provence and the nuns of Maubuisson are shown. In the background you can see the ramparts of Pontoise and the Saint-Maclou church.

Another window, which bears the signature of the glass painter Édouard Didron and the year 1887, depicts a procession on the occasion of a plague epidemic in Pontoise.

In 1955 Max Ingrand replaced the choir windows, which had been destroyed in bombings during the Second World War , with modern ones.

The organ dates from 1716. The organ case was created by Michel Pellet and is carved with atlases and flame vases. The instrumental part has been restored and supplemented several times ( François-Henry Clicquot 1784, Aristide Cavaillé-Coll 1877, Victor Gonzalez 1931 and Danion-Gonzalez 1979).