The Krombacher Brauerei Bernhard Schadeberg GmbH & Co. KG is a family-owned brewery from Krombach , a district of Kreuztal ( North Rhine-Westphalia ). With total sales in Germany of 6.02 million hectoliters in 2018, it is one of the largest German breweries. With Schweppes Deutschland GmbH, Krombacher has owned the brand and distribution rights for Schweppes , Orangina and Dr Pepper in Germany and Austria since 2006 . In 2016 she also took over the Vitamalz brand .

The brewery was first mentioned in a document on February 4, 1803 by Johannes Haas. His father, Johann Eberhard Haas, ran an inn in Krombach. Since, according to an ordinance of July 25, 1618, beer was only allowed to be served if the inn also had its own brewery and a malt kiln , Johannes Haas set up the brewery in his parents' business. The first contractually fixed relationships with the organizers of the Olper Shooting Festival have existed since 1829 .

The water for the house brewery (Hasbrauerei) was first brought in barrels from a spring at the foot of the Grumberg in the west of the village by ox cart to the brewery. The Krombacher Felsenquelle, which together with 48 of its own wells still provides the water for the brewery, was discovered as early as 1722. Instead of tracking down precious metals , as the Princely Highness of Siegen had instructed him to do , Mining Inspector Fresenius found the source in the Siegerland Rothaar Mountains . In 1854, the brewery owner Haas had to pay the church 17 florins (florins) a year to ensure that the spring water pipeline was led into the village via church properties. The relocation to the current site is likely to have taken place between 1858 and 1879/1882. During this time, two rock cellars were built that served as beer storage. 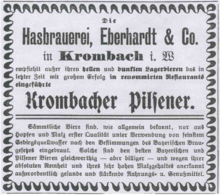 One of the first advertisements for Krombacher Pilsner from 1901

In 1896 Hermann Haas sold the brewery for 360,000 marks to Otto Eberhardt from Dortmund († August 17, 1924). This led this as a limited partnership with the name Hasbrauerei Eberhardt und Cie. continued and converted it into a joint stock company in 1905. The first advertising measures are documented for 1889 in an advertisement for Krombacher Pilsner in the Siegener newspaper . In October 1922, Bernhard Schadeberg senior took over the management of the company, which is still run as a family business today. In 1953, Friedrich Schadeberg joined the Krombacher Brewery as a graduate brewing engineer and in the following decades made the company one of the leading breweries in Germany. The owners are currently Barbara Lambrecht-Schadeberg , as well as Bernhard Schadeberg and his sister Petra Schadeberg-Herrmann.

In 2006 the Krombacher brewery announced that it had taken over the rights from Schweppes for Germany and Austria as well as the distribution rights for Orangina . In most other countries the trademark rights to Schweppes are held by the Dr Pepper Snapple Group . At the beginning of January 2007 it was announced that the company had acquired the private brewery A. Rolinck from Steinfurt . The brand name Rolinck and the individual products are to be retained. In January 2014 the Bundeskartellamt imposed a fine of 106.5 million euros on the Krombacher brewery and other breweries for fixing prices for draft and bottled beers in a beer cartel from 2006 to 2008. In August 2018, the Krombacher Brewery, together with the Bitburger Brewery Group and Coca-Cola European Partners Germany, founded the joint venture company Kollex for close cooperation in the field of digital services for the beverage wholesalers (GFGH) and the out-of-home market.

The symbol of Kreuztal, the Kindelsberg tower , can be seen in the emblem of the brewery . Including the Littfe Bach, which flows through Krombach.

A small island in the nearby Wiehltalsperre also gained national fame through TV advertising by the Krombacher brewery .

Since the 2007/08 Bundesliga season , the Krombacher brewery has also been a program sponsor of the ARD sports show . Since the beginning of the second half of 2008/09 the Bundesliga is the brewery from the Siegerland official partner of the Bundesliga. Until the summer of 2011, they were the name sponsor of the soccer talk show Doppelpass , which is broadcast every Sunday on Sport1 .

Since March 1995, the episodes of the TV crime series Tatort, broadcast in the First , were heralded by a Krombacher commercial. Due to an amendment to the State Broadcasting Treaty, the spots previously classified as permitted sponsoring will be treated as advertising from 2013 onwards that is prohibited on public broadcasting after 8 p.m. and have been discontinued.

As early as 1962, the agency of the copywriter Hubert Strauf invented the advertising slogan “brewed with rock spring water” , which is an integral part of advertising to this day. This term has been protected as a registered word mark since 2010. This means that this word, which sounds like a technical term, may only be used by the Krombacher brewery.

The brewery has meanwhile been sentenced to consent to the deletion of the trademark. In the second instance, the procedure was decided in favor of the Krombacher brewery. Krombacher can therefore continue to advertise exclusively that the beer contains rock spring water.

The Krombacher rainforest project was an initiative of the brewery with Günther Jauch as sponsor. The advertising message was: “For every crate of beer, one square meter of rainforest is placed under protection.” The rainforest project is active in the Dzanga Sangha Reserve National Park in the Sangha-Mbaéré economic prefecture in the south of the Central African Republic with an area of ​​approx. 4000 km². In practical terms, however, part of the income was only passed on to a rainforest foundation of the WWF , which only has direct access to already designated nature reserves in Africa . There was no acquisition of trees.

The OLG Hamm classified the initiative in 2003 as anti-competitive , as the advertising claims violate morality in competition within the meaning of Section 1 UWG , as far as they equate a crate of beer with the protection of a square meter of rainforest in Africa.

The judgment was overturned by the Federal Court of Justice and the case was referred back to the lower court, since " the link between the promotion of the environmental project and the sale of goods is fundamentally permissible " and in the previous judgments " from the point of view of misleading advertising [..] no or insufficient determinations [were] made ”.

From 6 June 2018 came in the social networks to Shitstorm to boycott announcements and -aufrufen because Krombacher with Nestlé Waters collaborates. Krombacher sells through its subsidiary N-Tea since January 2018 in Germany and Austria Nestlé - iced tea Nestea. Nestlé Waters has a reputation for barring access to groundwater for people in developing countries and then selling the bottled water at a high profit. Krombacher, on the other hand, advertises its nature image, in particular the rainforest project and Felsquell brewing water. There were posts on social networks like “Partnership with Nestlé? Not possible. ”Or“ Save the rainforest, but let people die of thirst? ”. Krombacher announced that the company would respond to every entry. The company said they only work with Nestlé through a subsidiary and not directly. The water for the iced tea comes from a bottler in Würzburg and the tea comes from sustainable cultivation according to the standards of the Rainforest Alliance . In April 2019 it was announced that Krombacher would end the cooperation with Nestle and the distribution of Nestea after only one and a half years in the summer of 2019. The distribution of Nestea had collapsed massively.

For many of its beers, Krombacher uses specially made returnable bottles, for example with "Krombacher" stamped on the neck of the bottle. Contrary to regular beer bottles, such as the NRW bottle , the Krombacher bottles can only be reused by Krombacher himself. This leads to high logistical costs for consumers, the trade. Required sorting and more complicated logistics damage the established reusable system and thus the environment. Krombacher cites "product differentiation" as the reason for the competition.

Further breweries in the urban area of ​​Kreuztal

Another Kreuztaler brewery, the Eichener Brewery , was located in the Eichen district , was considerably smaller and had also been part of the Krombacher brewery since 2002. It was closed in 2014. A third brewery is located in the Kreuztal district of Littfeld . It is a small in-house brewery.