The 2008/09 Bundesliga was the 46th season of the top German division in men's football. The season began on August 15, 2008 with the reigning champions FC Bayern Munich's home game against Hamburger SV (2-2) and ended on May 23, 2009 with the 34th matchday. Simultaneously with the elite class of the DFL also launched the 2. Bundesliga in the 2008/09 season .

The premier matchday of the new 3rd league had already been held three weeks earlier , and the introduction of this was the first time in 16 years that the mode of the Bundesliga was changed significantly. At the end of the season, as between 1982 and 1991, relegation games took place between the sixteenth in the table in the Bundesliga and the third in the second division, the winners of which are eligible to play for the Bundesliga in the 2009/10 season.

VfL Wolfsburg won the German championship for the first time and secured the title on matchday 34 with a 5-1 win at home against Werder Bremen . VfL is the first club in 39 years to be added to the list of German football champions . Descent had to Arminia Bielefeld , the Karlsruher SC and FC Energie Cottbus , who said in the relegation matches 1. FC Nuremberg defeated.

VfL Wolfsburg celebrates the championship after the last matchday

VfL Wolfsburg became champions of the 2008/09 season, which was considered a surprise for many. This success was closely linked to coach Felix Magath , who had already led Lower Saxony to fifth in the UEFA Cup a year earlier - in the previous two seasons, Wolfsburg almost relegated as 15th. A few game days before the end, however, Magath announced that he would work for Schalke 04 in the coming season, despite the title fight. After the end of the first half of the season Wolfsburg was only ninth, as the best team in the second half of the season they caught up and won the title. VfL was similarly ambivalent in other respects: In the away table, he was only eighth, but in his own stadium he only missed two points. The highest victories there were the 5: 1 against FC Bayern Munich, the 5: 1 against Werder Bremen and the 4: 0 against 1899 Hoffenheim.

FC Bayern Munich, classified by many as a favorite, played below the expectations of many after the double last year. Without even leading the table, the Munich team, who had replaced their new coach Jürgen Klinsmann with Jupp Heynckes five game days before the end , had a chance of winning the championship in the last game, but ended the season without a title.

Measured against their own expectations, VfB Stuttgart had a weak start to the season, which led to the dismissal of the master coach from 2007, Armin Veh . His successor was Markus Babbel , who did not yet have a coaching license. Under him, the Swabians were able to work their way up to the championship fight, but lost the direct duel for second or first place - depending on the result from Wolfsburg - at Bayern Munich with 1: 2 on the last matchday.

Another surprise besides VfL Wolfsburg was Hertha BSC. For the first time in the club's history, the Berliners coached by Lucien Favre even led the table for several match days in the second half of the season. On the final days of the match, however, they gambled away qualifying for the Champions League and finished fourth (0-0 against Schalke, 4-0 at Karlsruher SC).

Hamburger SV under coach Martin Jol , who came at the beginning of the season, played for the championship for a long time. The so-called North German Festival Weeks were a special highlight of the season , when Hamburg had to face arch-rivals Werder Bremen four times within 19 days in various competitions, with HSV being eliminated in both the DFB Cup and the UEFA Cup. In the end, Bremen won 2-0 in the Bundesliga home game on May 10th. However, Hamburg stayed in the league ahead of Bremen for the first time in six years. The 3: 2 in Frankfurt in the 90th minute on the last match day meant fifth place ahead of Dortmund, which under new coach Jürgen Klopp was able to improve significantly with sixth place in the table, even if the hoped-for international starting position failed to materialize. The 59 points of BVB meant the highest number in the history of the Bundesliga, with which the fifth place in the table was ever missed.

The promoted 1899 Hoffenheim had won the autumn championship in the first half of the season with great media attention . In the second half of the season, Ralf Rangnick's team was clearly weaker and slipped to seventh place. FC Schalke 04, led by Fred Rutten , which started with certain title ambitions, fell short of many expectations and demands from the start, which led to the coach's dismissal. With the eighth place Schalke did not reach a European competition for the first time in nine years. Bayer Leverkusen, who had already changed coach a year earlier because of seventh place, also failed to achieve their goals under Bruno Labbadia . The Werder Bremen team, on the other hand, weakened from the start and finished in tenth place, the worst place in ten years. In the UEFA Cup , however, she made it to the final, and by winning the DFB Cup , she finally made it into international competition. Hannover 96 was also unable to achieve its goal of qualifying for the Europa League. The Lower Saxony suffered this season with a slightly above-average home record, especially from their weakness away from home.

Bottom of the table was Arminia Bielefeld; the dismissal of Michael Frontzeck and the employment of Jörg Berger for a game could not prevent this, on the contrary: For a long time, East Westphalia were in 16th place in the table, which entitles them to relegation. On the last day of the match they slipped to last place with a 2-2 win against Hannover 96. The second direct relegated team was as penultimate in the table of Karlsruher SC under coach Edmund Becker . Bojan Prašnikar , who was able to save FC Energie Cottbus from relegation in the previous year, finished with his team in the relegation place and lost to 1. FC Nürnberg in the two play-offs (0: 3 and 0: 2), with the coach already announced his resignation after the first leg. More successful was Hans Meyer , who had already replaced Jos Luhukay as coach of the current bottom of the table Borussia Mönchengladbach in the first half of the season and who led the “foals” to 15th place, but had his contract terminated after the season. VfL Bochum, who finished fourteenth in the end, had been on a relegation zone on a few days. The season was not very spectacular for Hannover 96, 1. FC Köln and Eintracht Frankfurt, which took positions eleven to thirteen in the final table, which is particularly a success for the newly promoted Cologne.

The low scores of the teams in positions 13 to 15 were remarkable: never since the introduction of the third relegated team in 1974 has a team with less than 34 points (calculated according to the three-point rule ) managed to stay in the league. This season, however, three teams achieved this: Frankfurt, Bochum and Mönchengladbach. (In the following season, two more teams, Hanover and (via relegation) Nuremberg; 2012/13 then FC Augsburg and TSG Hoffenheim via relegation, 2013/14 VfB Stuttgart and HSV via relegation, 2018 / 19 of FC Schalke and FC Augsburg and 2019/20 SV Werder Bremen on relegation.)

An overview of the participating clubs

The crosstab shows the results of all games this season. The home team is listed in the left column, the visiting team in the top row.

In the first half of the season, Hoffenheim's Vedad Ibišević caused a sensation with 18 goals, but he suffered a serious injury during the winter break and was out for the rest of the season. The top scorer was Grafite from champions VfL Wolfsburg with 28 goals. Grafite and his teammate Edin Džeko broke several Bundesliga records this season: For the first time in Bundesliga history, they managed to have two players from the same club each scoring over twenty goals. With their goals on the last matchday, they also became the most successful striker duo in Bundesliga history. With a total of 54 of 80 goals scored, both strikers played a key role in VfL Wolfsburg's title win. Dethroned record holders were Bayern Gerd Müller with 40 and Uli Hoeneß with 13 goals in the 1971/72 season.

The most successful goalscorer of the 2008/09 season: Grafite

Zvjezdan Misimović set a new record with his 20 assists. The kicker has been recording the number of assists since 1988, the record so far was 17.

The highest average attendance in the league was in Signal-Iduna-Park at 74,830 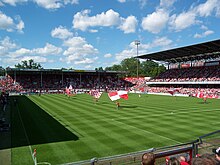 Energie Cottbus had the lowest average with 16,709 spectators per game

With 1,272,108 visitors during the entire season, Borussia Dortmund had the most spectators and thus exceeded its own record from the 2007/08 season with 1,232,669 spectators.

The championship team at VfL Wolfsburg

In the 2008/09 season, the individual matches on a matchday were usually kicked off as follows:

In English weeks there were also Tuesday and Wednesday games.

In order to ensure that no club only has a day of rest between national and international games, it was possible for the first time this season to have a Saturday game on Sunday and a Sunday game on Saturday.

Playing times of the German Bundesliga