The Wildparkstadion is a football stadium under renovation in the Baden-Württemberg city ​​of Karlsruhe . It is the center of a facility made up of several sports and practice areas, a tennis facility and other sports facilities in the Karlsruhe Hardtwald . The main user is the football department of Karlsruher SC . It will no longer be used as an athletics stadium, as the athletics facility was partially removed in the course of relocating the field. The facility was built in 1955 to replace the old FC-Phönix sports field from 1921 and originally had 55,000 seats. This number has been reduced several times through changed regulations and expanded through renovations, currently it has 15,330 seats and standing places. It is the property of the City of Karlsruhe and is leased to its users. Since November 5, 2018, the Wildpark Stadium has been converted into a pure football stadium while the game is running .

The FC Phoenix , one of the two previous associations of the KSC, received by the city of Karlsruhe in 1921 on lease for 50 years, a plot in the Hardtwald provided on until 1923 a complex of three football fields, two tennis courts, a 400-meter track and throw - and jumping facilities have been created. After the merger of FC Phönix and VfB Mühlburg to form KSC, construction of a modern stadium began in 1952 to replace the now 30-year-old Phönix facilities.

The first event was an International Athletics Festival on July 17, 1955, and on August 7, 1955, the converted stadium was officially handed over to the Karlsruher SC by Karlsruhe's Lord Mayor Günther Klotz . In the opening game on the same day in front of 45,000 spectators, the reigning cup winner KSC drew 2-2 from the German champions Rot-Weiss Essen .

In the 1950s, the Wildpark Stadium was one of the most modern stadiums of its time in Germany. In the 1970s, the opposite stand was expanded, and in 1986 a video screen was installed, which was one of the most modern in Europe at the time. The athletics facilities were not replaced by plastic systems until 1978, and the curves of the running tracks were replaced by regular round arches instead of basket arches - however, since 1968 there have been no major athletics events in Karlsruhe. In preparation for the planned conversion into a pure football stadium, turf heating was installed in summer 2007 and the running tracks were partially removed.

At the beginning of the 1990s, the last major structural change to the stadium to date was made with the construction of a new main grandstand. The grandstand, which was built according to the plans of the architects Thomas Großmann and Lucy Hillebrand and the color designer Fritz Fuchs, has seats for a maximum of 6400 spectators and 24 business boxes. The inauguration of the new main grandstand took place in 1993 with a 3-0 victory for Karlsruher SC against Borussia Dortmund .

The Wildpark Stadium has had a floodlight system since 1957. Since in the 1970s the brightness of the old system was no longer sufficient to illuminate the stadium sufficiently for television broadcasts (the DFB stipulated a brightness of 100 lux at the time), the building authority of the city of Karlsruhe was commissioned to plan a new floodlight system. Due to lighting considerations and the boundary condition that the new floodlight masts should not stand in the way of a later full roofing of the stadium, it was decided to erect the new masts directly behind the wall crown of the stadium. The four tubular steel structures extend at an angle of 15 ° up to 54 meters in height and are equipped with reinforced concrete anchors in the outer slope of the stadium Walls established . The new floodlight system was built in 1978 and cost the equivalent of 1.11 million euros.

Way to renovation or new building

On August 23, 2006, those responsible for the KSC had to admit at a press conference that the club could not contribute financially to the renovation of the stadium. It was said that if the KSC participated, an old contract from the time of Roland Schmider's presidency forced the association to make compensation payments to the architecture office, which in 1996 developed a design for a new wildlife park stadium, which in the meantime could no longer be implemented . Such a financial risk - also with regard to the licensing - was not wanted to take.

After several months of negotiations between the city and Karlsruher SC about the financing of the renovation project, which was valued at 58 million euros, the Karlsruhe municipal council voted on February 27, 2007 with a large majority in favor of the construction project. The negotiated financing concept provided for the distribution of the costs as follows: 30 million euros should come from the city coffers, the state of Baden-Württemberg contribute a further 10 million euros, while the remaining 18 million euros flow into the project through low-interest municipal loans should. The future rental relationship between the city as the owner of the stadium and the KSC, which is decisive for the form of the rental payments by the club, has not yet been clarified. A joint operating company was planned, from whose income the rent was to be transferred to the city, but this does not comply with the DFL statutes .

In the meantime, the Karlsruhe Institute of Technology had expressed interest in acquiring the stadium area in order to be able to expand. This would have shattered the conversion plans. A new location would then have to be found for a football arena to be built, something that had already been suggested by local politicians and KSC members in the past.

In October 2014, the KSC and the city of Karlsruhe announced that they had rejected the conversion plans in favor of a new building for economic reasons. They wanted to submit a draft contract to the local council in spring 2015, which u. a. Contains regulations on investment costs (approx. 88 million euros) as well as lease and naming rights. 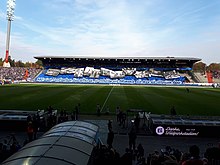 Choreo by the Karlsruhe fans during the farewell game against the Würzburger Kickers on November 3, 2018.

In October 2018, the club announced the final decision of the city council to approve a new stadium. On November 3, 2018, the third division game against the Würzburger Kickers was a "farewell game" under the motto Thank you, Wildparkstadion! 1955–2018 . On November 5, 2018, while the match was in progress, the renovation work to a pure football stadium with a capacity of around 35,000 spectators began , with which BAM Sports GmbH was commissioned as general contractor and which should be completed in May 2022.

The final detailed planning was presented on November 22, 2018 in a citizens' forum. The cost of the renovation is 123 million euros. Of this, eleven million euros are subsidized by the Baden-Württemberg Ministry for Culture, Youth and Sport .

First of all, the north stand was demolished and replaced by a temporary stand that offers standing room for 5,000 people. In the summer break of 2019, the south stand was also demolished and replaced by a temporary stand with 4,500 standing places, which means that the minimum capacity of 15,000 seats is not undercut at any construction phase. In August 2019, the demolition of the back straight began. On December 9, 2019, after more than a year of preparatory work, the groundbreaking ceremony for the new stadium was carried out, starting with the back straight / east stand and the main / west stand. The temporary stands are then to be dismantled one after the other and replaced by the new stands.

In June 2020 it was decided to dismantle the provisional south stand in the same month in order to enable an uninterrupted transition of the construction work from the back straight / east stand to the new south stand and to speed it up. The east stand is due to be completed in mid-September 2020. This became possible because, due to the COVID-19 pandemic, the games have been played as ghost games since mid-May 2020 . The DFL therefore issued an exemption to fall below the minimum capacity of 15,000 spectators. The original completion of the south stand was planned for spring / summer 2021; a new date has not yet been set. The demolition of the main stand / west stand will begin in December 2020. An earlier start is not possible because bats nest in the building . From March 2021, the construction of the new grandstand is to begin at this point.

The Wildpark Stadium at a KSC game