Kronos Racing is a Belgian motorsport team that was founded in 1994 by Marc Van Dalen and Jean-Pierre Mondron . The team received support from Peugeot Belgium-Luxembourg from 1994 to 2003 and from Citroën from 2004 to 2007 . Since 2008, it has been doing rallies for Peugeot Belgium-Luxembourg and since 2009 also for Peugeot UK. Kronos Racing has won several touring car and rallying titles . The biggest success of the team in history winning the World Rally Championship in 2006 by Sebastien Loeb .

In the first few years after its establishment, Kronos Racing took part in Belgian rallies and the Belgian Touring Car Championship. The team led Sébastien Ugeux in 1998 and Frédéric Bouvy to win the title in a Peugeot 306 GTI . In 1999, Bouvy, Emmanuel Collard and Anthony Beltoise also won the 24-hour race at Spa-Francorchamps . This success could be repeated in 2000 with Bouvy, Kurt Mollekens and Didier Defourny .

In 2001 Kronos Racing made its debut in the World Rally Championship in which it fielded a Peugeot 206 WRC. Initially, Kris Princen , later Grégoire De Mévius and finally Simon Jean-Joseph competed for the team, who achieved the best results with two ninth places. In 2002 the team continued its program in the World Rally Championship. It fielded a Peugeot 206 WRC for Bruno Thiry in seven races , who scored points for the team for the first time with fifth place in the Rallye Deutschland .

Manfred Stohl at the Rally Japan 2005

After Kronos Racing took part in the 2003 European Rally Championship , where the Belgian Thiry won the championship, Kronos Racing returned in 2004 to the World Championship, where it became the Citroën Sport satellite team . Kronos Racing put in the Rally Finland a Citroën Xsara WRC for Juuso Pykälistö one who could not reach the goal, however. In 2005 Kronos Racing competed with two factory-supported Citroën C2 Super 1600s for Kris Meeke and Daniel Sordo in the Junior World Rally Championship , in which the team led the Spaniard Sordo to win the title. In addition, an Xsara WRC was occasionally used, with which the team was able to achieve good results: Manfred Stohl came second in the Cyprus Rally and third in the Australian Rally , and Xavier Pons was fourth in the Catalonia Rally . 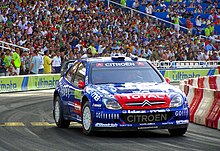 Xavier Pons at the 2006 Rally Greece

As Citroën Sport withdrew from the World Rally Championship for a year, Citroën chose Kronos Racing to represent the brand in the 2006 season . The team looked after three Citroën Xsara WRCs, one of which was reserved for the reigning world champion Sébastien Loeb . The other two were piloted by Pons and Sordo. Colin McRae also competed in a rally for the team when he was replacing the injured Sébastien Loeb. Loeb scored eight rally victories during the season, so that Kronos Total Citroën led the team standings up to four rounds before the end of the season. Since Loeb was unable to take part in the last four races due to injury, and Xavier Pons and Daniel Sordo were relatively unsuccessful, Kronos Racing had to admit defeat Ford in the team championship. Nevertheless, Sébastien Loeb still won the drivers' championship one point ahead of his injury break at the end of the season thanks to his large points lead.

In the 2007 season , Kronos Racing again took part in the World Rally Championship as a private team with two Xsara WRCs. Manfred Stohl competed for an entire season for OMV Kronos Citroen . The second vehicle was initially driven by Daniel Carlsson and later by François Duval . Duval achieved the best result for the team with second place in the Rallye Deutschland. In the drivers' standings, Stohl reached ninth place with 13 points, Duval tenth place with 12 points, and Carlsson 14th place with 9 points. Kronos Racing was again represented in the Junior World Rally Championship with two Citroën C2 Super 1600s, in which Gilles Schammel and Raphaël Auquier for the team participated.

In 2008 Kronos Racing left the World Rally Championship and entered the Intercontinental Rally Challenge with two Peugeot 207 Super 2000s for Nicolas Vouilloz and Freddy Loix . Occasionally, a third vehicle was also used, naming BFGoodrich. Vouilloz and Loix finished the championship in first and second place. Kronos Racing won a total of five out of ten rallies, including three wins for Loix and one each for Vouilloz and Juho Hänninen .

In 2009 Kronos Racing continued its program in the Intercontinental Rally Challenge. In addition to the two vehicles for Vouilloz and Loix, a third vehicle has now been permanently used for Kris Meeke with the support of Peugeot UK . In addition, a fourth vehicle with the name of BFGoodrich ran in some rallies. Meeke secured Kronos Racing the title again with four wins. Loix and Vouilloz took third and fourth place in the drivers' championship. BFGoodrich driver Sébastien Ogier finished his only outing at the Monte Carlo Rally as the winner.

Kronos Racing continued to field a Peugeot 207 Super 2000 for Kris Meeke in 2010. Nicolas Vouilloz and Freddy Loix, however, left the team and switched to Škoda. A new addition was Thierry Neuville , who took a place at Peugeot Belgium-Luxembourg but only contested six rallies. Meeke won a rally and finished the championship in third place, Neuville was ninth. Yazeed Al Rajhi's Peugeot was also prepared by Kronos Racing.

In the 2011 season Neuville and Al Rajhi will again be on the IRC for Kronos Racing. Kris Meeke switched to Mini in the WRC, while Guy Wilks took his place at Peugeot UK .

The following parts of this section since 2011 seem out of date to be : Outdated data
Please help with to the missing information research and insert .

In 2011 Kronos Racing will again compete in circuit races. The team also bought a Lola-Aston Martin B09 / 60 and signed Vanina Ickx . It is planned to take part in the Le Mans 24-hour race , the Le Mans Series and the Intercontinental Le Mans Cup .