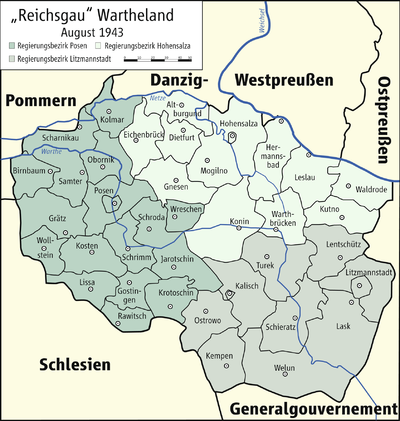 During the Second World War, Samter County was the name of a German administrative unit in occupied Poland (1939–1945) .

The area around the western Polish city of Szamotuły ( Samter ) belonged to the Prussian province of Posen as the district of Samter from 1815 to 1918 . In the course of the Wielkopolska Uprising , Szamotuły came under Polish control on December 27, 1918 and was officially ceded to the newly founded Poland on June 28, 1919 with the signing of the Versailles Treaty .

At the beginning of the Second World War , German troops occupied the western Polish powiat Szamotuły , the district town of Szamotuły was captured on September 7, 1939.

On October 26, 1939, the powiat was annexed to the German Reich under the name of Landkreis Samter , which, as a unilateral act of violence, was ineffective under international law. The district became part of the administrative district of Posen in the Reichsgau Wartheland .

The seat of the German district office became the district town of Samter .

The German occupation ended with the invasion of the Red Army in January 1945.

In 1941 the district of Samter had 67,497 mostly Polish inhabitants. The German occupation authorities drove several thousand Poles from the area.

A small German minority lived in the area, and Germans were also settled during the occupation. Towards the end of the occupation, most of them left the area.

The Jewish population was deported to the General Government and murdered there.

The local occupation authorities immediately gave all localities in the district with German names, although officially, according to an unpublished decree of the Interior Minister of December 29, 1939, the German names valid in 1918 should initially continue to apply. On May 18, 1943, German names were set for all places with a post or train station in Wartheland , although there were again deviations.

List of cities and administrative districts in the district of Samter: