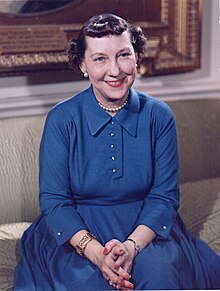 Mamie Eisenhower in May 1954

Mamie Eisenhower was the daughter of John Sheldon Doud and Elivera Matilda Carlson. Her sisters were Eleanor, Edna Mae and Mabel Frances Doud. When she was seven, she moved to Colorado with her family . After living briefly in Pueblo , among other places , the Douds settled in Denver . Mamie and her three sisters grew up in a big house; the family had several servants.

Mamie Eisenhower was buried next to her husband in Abilene .