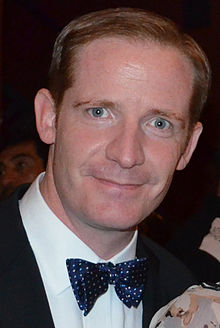 Marc Evan Jackson (born August 21, 1970 in Buffalo , New York ) is an American actor , improviser and comedian . He gained fame primarily through his series roles as Trevor Nelsson in Parks and Recreation and as Kevin Cozner from Brooklyn Nine-Nine .

Marc Evan Jackson was born in Buffalo, New York State, and grew up in Amherst with a brother and sister . There he successfully graduated from Amherst Central High School in 1988 and then attended Calvin College , from which he graduated in 1992 with a master's degree in philosophy as a major and in political science and environmental studies as minor subjects. He took part in his first theater performances while still a student.

After graduating, Jackson worked for a few years on the decks of sailing ships, so-called schooners , for example in Michigan and as first mate on the Mercantile in Maine . At the same time, he worked for WGVU West Michigan Public Broadcasting , a radio station, where he took over the morning show in 1997.

Jackson began his career in 1998 as part of the River City Improv, affiliated with Calvin College, after rehearsing a piano improv. He later joined The Second City Detroit . With her he appeared in 1999 on the show Phantom Menace to Society .

In 2001 Jackson moved to Los Angeles , where he initially taught improvisation at Second City Hollywood. There he joined the improv group The 313 in 2003 , which takes its name from the Detroit phone code, the city where most of the founders, such as Keegan-Michael Key , Larry Joe Campbell and Maribeth Monroe , originally came. To date, the group performs at comedy festivals, including in Las Vegas and San Francisco .

At Second City Hollywood, Jackson met Mark Gagliardi and Ben Acker, who took him to the first rehearsals for Thrilling Adventure Hour , a stage production in which Jackson played the role of Sparks Nevada . The show has been performed live since 2005 and has been published entirely as a podcast since 2011. Together with Carrie Clifford , he and she form the duo Sky & Nancy Collins , who come from Orange County in California and, on the advice of friends, try their hand at stand-up comedy for the first time because they find it funny. The duo has already appeared in various comedy formats.

In 2000, Jackson got his first role on camera after playing a small role in Garage: A Rock Saga . As a result, he mainly appeared in guest roles in US series, including Jim , Carpoolers , Reno 911! , Vamped Out , Psych , Karate-Chaoten , Happy Endings , 2 Broke Girls , Arrested Development , The Middle , Modern Family , Workaholics , The League , Masters of Sex , Man Seeking Woman , Rizzoli & Isles , Black-ish , Kings of Con , Stop it, Larry! , GLOW or The 5th Quarter . There are also numerous appearances in films, especially in comedies. The best known include Melvin Goes to Dinner , Slammin 'Salmon - Butter bei die Fisch! , Transformers , The Babymakers , Kings of Summer , 22 Jump Street , Kong: Skull Island and Jumanji: Welcome to the Jungle .

However, Jackson is best known for his recurring series appearances. From 2012 to 2013 he played the role of Jim Dunnigan in Suit Up . In 2013 he took on the role of Trevor Nelsson in Parks and Recreation , which he played until 2015, and that of Kevin Cozner , husband of Police Captain Ray Holt in Brooklyn Nine-Nine . Both series were conceived and produced by Dan Goor and Michael Schur . Since 2017 he has played Shawn in The Good Place , another series by Michael Schurs.

In addition to his acting and stage work, Jackson is a regular guest on podcasts and radio shows. He also appeared in a few commercials, including for Farmers Insurance alongside JK Simmons or DirecTV and Coors.

Jackson has been married to veterinarian Beth Hagenlocker since April 27, 2002. You live in Venice , a district of Los Angeles.

One of Jackson's trademarks is wearing a bow tie .