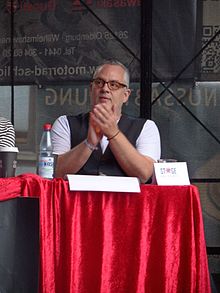 After graduating from the Wöhlerschule in Frankfurt am Main, Stoeck began studying piano at Dr. Hoch's Conservatory in Frankfurt, to then take classical percussion lessons with Karl Setzer. He learned to play the drums from Joe Porcaro in Los Angeles , the father of the former Toto drummer Jeff Porcaro , whose character and playing had an influence on the development of the drummer.

From 1984 he was active as a drummer in Dieter Falk's band , and then in 1993/94 as a studio musician in Nashville and Toronto . From 2003 to 2005 he was on drums with the Cologne carnival band Paveier . He took part in 500 CD productions at home and abroad as well as in concerts and tours from 1984 and accompanied Pur , Peter Hofmann , Claudia Jung , Michelle and Brunner & Brunner on drums.

From 2016 he worked as a music teacher in Oldenburg and Diepholz.

He died of complications from cancer.