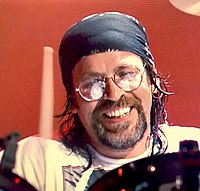 Jeffrey Thomas "Jeff" Porcaro (born April 1, 1954 in Hartford , Connecticut , †  August 5, 1992 in Hollywood , California ) was an American drummer and founding member of the California rock group Toto . Porcaro is still considered one of the most influential drummers in rock and pop. In 2016, Rolling Stone listed Porcaro as 37th of the 100 best drummers of all time . Porcaro was without question one of the most respected and versatile studio drummers for rock and pop music from the 1970s to the early 1990s. The sound of mainstream pop / rock drumming in the 1980s was in large part the sound of Jeff Porcaro. 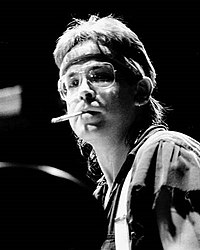 His work as a studio drummer in Los Angeles was so popular that he went on tour with Sonny & Cher when he was just under 20 . In 1977 he founded the band Toto with former high school friends Steve Lukather and David Hungate , his brother Steve Porcaro and his studio musician friend David Paich . Through their success and his continued session work, Jeff Porcaro became known to a larger audience.

His role models were Jim Keltner and Jim Gordon ; He also borrowed music from Bernard Purdie and John Bonham ( Led Zeppelin ). In 1982 Porcaro played the halftime shuffle groove Rosanna on the album Toto IV - a groove that is one of the most distinctive and difficult in rock drumming.

In 1992, after the recordings for the Toto album Kingdom of Desire were finished , Porcaro took a break in the summer shortly before the band's upcoming world tour. Jeff Porcaro passed away unexpectedly on August 5, 1992.

Steve Lukather, the guitarist of Toto, recalls that day in his September 2018 memoir “The Gospel According To Luke”: “The last time I spoke to Jeff was the day he died. He called me and invited me to a barbecue that evening. We discussed what the setlist for the upcoming Kingdom of Desire tour should look like. Jeff said goodbye; he wanted to clean up the garden and prepare the barbecue. The last words I said to him were 'Love you, bro.' At 6:30 pm I got a call from bassist Abe Laboriel Sr. He had just been in a recording session with Jeff's father, Joe Porcaro, when he received a call that Jeff might have had a seizure. (…) I panicked and raced to Westlake Hospital, where Jeff's family had gathered. It took me over half an hour on the freeway and also got lost. When I got to Westlake, I was met by Jake, a neighbor of Jeff who happened to be a doctor there in the emergency room. I yelled 'Jake, where's Jeff, is he ok?' But he shook his head. 'Jeff passed away. He died.' Everything around me was lost (...). I screamed like I saw the devil. A nurse put smelling salts under my nose. (…) Jeff had recently sprayed a pesticide in the garden, and as I know him, without a protective mask and gloves and probably with a cigarette. The toxic aerosol must have passed into his blood system. He was taking a hot shower and when he came out he fell to the floor in front of his wife Susan and three children Miles, Nico and Christopher. As I only found out later, he was already dead by then, and his family was probably hoping for a miracle in the hospital. They had desperately tried to revive Jeff. (…) His death just made no sense to me at the time, he wasn't sick for a day in his life; but I comfort myself with the thought that his work was so extraordinary and unique that he did not need a long life. (...) Jeff was not just a drummer, he was a living legend, a talent of the century who made hundreds of careers possible for other artists and by whom drummers still measure their skills today. "

A subsequent autopsy revealed that the drummer had suffered from hardening of the arteries. The occlusion of the coronary arteries was given as the cause of death . It was initially assumed that (previous) cocaine consumption was the cause of the hardening of the arteries and the occlusion of the cardiac vein. The blood test result was questioned by friends and family members because the musician had renounced all drugs for a long time.

On August 10, 1992, Jeff Porcaro was buried in Forest Lawn Memorial Park in the Hollywood Hills, attended by 1,500 mourners. In attendance were Eddie Van Halen, Madonna, Don Henley and many other well-known artists for whom Porcaro had worked. His grave, number 109, is on Lincoln Terrace.

Porcaro's name appears in the credits of the best-selling music album as well as the best-selling double album in music history. On the double album The Wall by Pink Floyd , he played the 5/4 or 9/8 rhythm of Mother . He played the song Beat It on Thriller . He was also asked for the commercially extremely successful album Dangerous , Michael Jackson's 1991 album. Porcaro recorded the world hit Heal the World on March 11, 1991 at Record Plant Studios . Michael Jackson dedicates the booklet of his best-of album " HIStory: Past, Present and Future, Book I. " from 1995 the drummer a line of remembrance. (Text: "Jeff Porcaro ... we miss you!"). Richard Marx dedicated the song "One Man" from the 1993 album " Paid Vacation " to Jeff Porcaro . The booklet says: "To me, there was no better drummer than Jeff Porcaro. Our loss is heavens gain."

It is said that Bruce Springsteen would have offered Porcaro a million dollars if he had toured with him. He is said to have turned down the offer because he preferred to tour with Toto. One day after Porcaro died, Springsteen dedicated the song Human Touch to the late drummer .

Albums by other artists (excerpt)