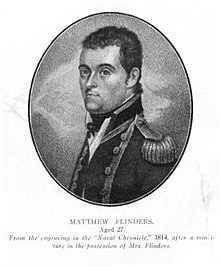 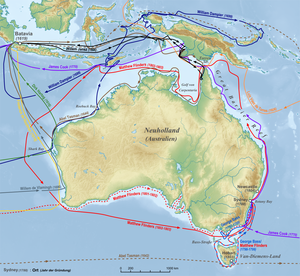 Routes of explorations Flinders (red) and together with Bass (blue)

Inspired by reading Daniel Defoe's Robinson Crusoe , Matthew Flinders had an early desire to go to sea. In 1789 Matthew Flinders joined the Royal Navy and sailed 1791-1793 with Captain William Bligh on the Providence in the Pacific. Matthew Flinders was mentored and promoted by Joseph Banks , who played a key role in the preparation of the two expeditions.

In 1795, as a midshipman , Flinders accompanied the naval doctor George Bass on his journey to the southeast coast of Australia and in 1798 explored the islands at the east entrance of the Bass Strait . With Bass he crossed the street named after him and circled Tasmania .

On a new voyage of discovery in 1801 with his ship Investigator , Flinders followed the south coast of Australia from Cape Leeuwin to the Bass Strait and discovered the Spencer Gulf and the St. Vincent Gulf . He was accompanied on this trip by the botanist Robert Brown and, as a midshipman, his nephew John Franklin , who was twelve years his junior and who later became the rear admiral and polar explorer. The botanical draftsman Ferdinand Bauer accompanied him and made a total of 2073 drawings. Bungaree , an elder of the Aborigines , also served as an interpreter and mediator. On April 8, 1802, Flinders met in Encounter Bay with the French research expedition led by Nicolas Baudin . In the same year, Flinders also explored Australia's east coast from Port Stephens to Cape Palmerston and the Great Barrier Reef . On this voyage of discovery he found the entrance to Port Phillip Bay , which John Murray had recently sighted. In Torres Strait he discovered the only safe passage in the north of Prince Wales Island . Flinders was the first to completely circumnavigate Australia.

On the way back from Sydney to England, Flinders had to call at the then still French island of Mauritius (Île de France) because of the poor condition of his ship Cumberland . Despite a letter of safe conduct from the French government, the island's governor, Charles Matthieu Isidore Decaen , had the ship confiscated and Flinders captured. He also ignored requests from the French government to release Flinders. It was not until a British blockade in 1810 that after six years and five months imprisonment, he was released. In October of the same year Flinders reached London and was subsequently promoted to post-captain , which in this case corresponded to a current frigate captain .

Flinders invented a tool to reduce the influence of the ship's iron on the compass needle: the so-called Flinders rod, a vertical iron rod or a vertical iron tube in front of the compass . In 1804 he was the first to suggest Australia as the name for the new continent , in memory of the fabulous southern land sought for centuries, the Terra Australis . This designation quickly replaced the name Neuholland, which had been in use until then .

His only daughter Anne (1812-1892), who emerged from his marriage to Ann Chappelle, married the surveyor and inventor William Petrie and became the mother of the eminent Egyptologist William Matthew Flinders Petrie .

Flinders was buried in St James's Garden Cemetery in London on July 23, 1814 . However, just a few decades later, his tombstone, along with many others, was removed when the cemetery was redesigned. As early as 1852 his grave could no longer be found by his relatives either. His grave was rediscovered in January 2019 during archaeological excavation work on the area of ​​the then cemetery in connection with the construction of the High Speed ​​2 express railway line . The assignment was clearly possible due to a labeled lead badge on his coffin.

Several geographic objects and authorities in Australia are named after Matthew Flinders, including the river Flinders River , the administrative area Flinders Shire and the highway Flinders Highway in the state of Queensland , the mountain Flinders Ranges ( German  Flinders Ranges ) and another highway called Flinders Highway in the state of South Australia as well as the offshore island of Flinders Island from Tasmania . In the major cities of Adelaide and Melbourne , major streets in their respective city centers are named after Flinders; as does Flinders University in Adelaide. After the Flinders Street in Melbourne also one of the two largest railway stations in the city is named, the emblematic Flinders Street Station .

Outside Australia, Flinders Peak , a mountain in Antarctica, is named after him.