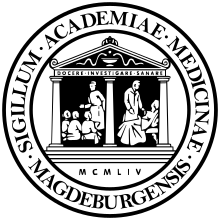 The seal of the Medical Academy Magdeburg

The Magdeburg Medical Academy (MAM) was a medical university with the right to award doctorates and post- doctoral qualifications to train doctors . It was founded on September 1, 1954 and had its seat in the city of Magdeburg , at that time the district capital of the district of Magdeburg in the German Democratic Republic (GDR) and currently the state capital of the German state Saxony-Anhalt . In contrast to the medical academies in Dresden and Erfurt , which were founded in the same year, where students were only trained in the clinical part of medical studies , pre-clinical studies were also possible at MAM from 1960 onwards. In October 1993, the university as was University Hospital Magdeburg in the newly founded Otto von Guericke University Magdeburg incorporated. In total, almost 4,000 graduates completed their medical training at the academy. 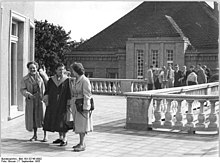 The Medical Academy Magdeburg was founded in September 1954 together with two other medical academies in Dresden and Erfurt . It emerged from several hospitals in the city of Magdeburg, in particular the city hospital "Gustav Ricker", which emerged from the former Sudenburg hospital. Teaching began in 1954, but initially only for the clinical part of medical studies for students who passed the first section of the medical examination (Physikum). In the year it was founded, the academy, together with the affiliated children's and state women's clinic, consisted of four institutes and eight clinics with a total capacity of 2007 beds.

At the beginning of the first training semester in 1954, however, only 47 students, most of them from Berlin and Leipzig , registered. One year later, 157 new students were admitted to clinical studies. In the years after it was founded, the university was expanded considerably in terms of structure and, through a series of new appointments, also in terms of subject and personnel. The so-called Central Lecture Hall was the first new building to go into operation on September 5, 1955, the day the second year began. The house, for the construction of which the GDR government had made available 1.2 million DM , contained the library, seminar rooms and lounges in addition to the lecture hall equipped with the appropriate technology for 250 students. 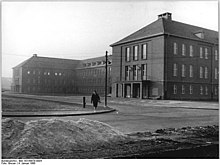 The first doctorate took place in 1955, in the first five years after the foundation, 56 doctoral theses and three habilitations were written . The main research focus in the beginning was, due to the professors involved in the establishment, child pathology and neurobiology . The number of students was 638 in 1960 and 829 in the following year. By the beginning of the 1960s, with the exception of orthopedics, all of the disciplines relevant to training were represented at the academy. At the turn of the year 1960/1961, the establishment of preclinical studies began the full training of doctors, which, in contrast, was not implemented at the Medical Academies in Dresden and Erfurt until the end of their existence. The support from the Technical University of Magdeburg in the field of education in chemistry and physics was essential for the implementation of the preclinical studies . For the ideological instruction of the students, and later also of the academic staff including lecturers and professors, there was an institute for Marxism-Leninism at the MAM as at the other universities in the GDR . 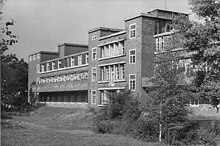 In the area of ​​medical care, in addition to the specialized tasks of a university hospital , the university also took on basic care for the southeast of the city of Magdeburg. Around 30,000 to 40,000 inpatients and between 300,000 and 650,000 outpatients were treated annually. From the 1970s onwards, the neurosciences , immunology , pregnancy and child development formed the focus of the activities of the Medical Academy Magdeburg. With the installation of a linear accelerator , radiation therapy treatments were also possible at the academy from 1983 . Three years later, the Institute for Neurobiology and Brain Research was established on the MAM site as a non-university academy institute of the Academy of Sciences of the GDR , the predecessor of the currently existing Leibniz Institute for Neurobiology . Hansjürgen Matthies , who acted as professor of pharmacology at MAM, became the director of the new institute .

The allocation of study places, for which a university's own commission was responsible until the academic year 1990/1991, was carried out for the first time by the Central Office for the Allocation of Study Places from the academic year 1991/1992 as a result of German reunification . With the establishment of Otto von Guericke University Magdeburg on October 3, 1993 through the merger of the previously existing Technical University of Magdeburg, the Magdeburg University of Education and the Magdeburg Medical Academy, the MAM became the Magdeburg University Hospital of the newly founded university. In the almost 40 years of its existence, 3,948 doctors have been trained at the university, 2,723 doctorates and 203 habilitations have been completed .

The pathologist Hasso Eßbach was founding rector of the Magdeburg Medical Academy from 1954 to 1958 . He was followed from 1958 to 1962 by the pediatrician Karl Ludwig Nißler and from 1962 to 1967 by the pharmacologist and neuroscientist Hansjürgen Matthies . He was rector from 1973 to 1979, after the dermatologist Georg Wolfgang Höfs had previously held this position from 1967 to 1970 and the ophthalmologist Hans-Günter Gießmann from 1970 to 1973 . Matthies' successor from 1979 to 1989 was the neurologist Rolf-Dieter Koch . During the time of political change in the GDR, the pharmacologist Bernd Lößner took over the rectorate in October 1989 , the last rector from 1990 until the integration of MAM into the University of Magdeburg in 1993 was the pediatrician Horst Köditz .

Other university lecturers working at the academy included Elfriede Paul in the areas of social hygiene and occupational medicine , the biochemist Eberhard Hofmann , the orthopedist Wolfram Neumann , the neurobiologist Gerald Wolf , the hygienist and environmental medicine specialist Giselher Schuschke , Dieter Krause in the forensic medicine department and Jürgen Cleaner in the field of biometrics . In 1976, Peter Heinrich founded the Surgical Society at the Magdeburg Medical Academy , which held 15 conferences. From the merger with the Society for Surgery at the University of Halle , the Society for Surgery Saxony-Anhalt later emerged.

Graduates of the university included the transfusion doctor Walter Brandstädter , from 1995 to 1999 Vice President of the German Medical Association , the internist Peter von Wichert , emeritus clinic director at the Philipps University of Marburg and in 1997/1998 president of the German Society for Internal Medicine , the pediatric one Oncologist Arndt Borkhardt , Clinic Director at the Heinrich Heine University in Düsseldorf , and the orthopedist Harry Rudolf Merk , Director of the Clinic and Polyclinic for Orthopedics and Orthopedic Surgery at the Ernst Moritz Arndt University Greifswald .