Another model known as the MiG-9 was the prototype of a piston-engine fighter aircraft from 1941. See section MiG-9 (1941) .

The development of the MiG-9 began due to a request from the Ministry of Defense from February 1945 under the designation I-300 . At the same time, work also began at the Yakovlev , Lavochkin and Sukhoi design offices . The first flight of the prototype was to take place in March 1946.

As with the I-250, the wings were kept very thin, but still offered enough space for the main landing gear wheels. In the first plans, the two engines of the MiG-9 were to be attached to the wings according to the classic scheme for twin-engine aircraft, analogous to the German Me 262 . The decision to install the engines in the fuselage resulted in particular from the expected aerodynamic advantage due to the lower frontal resistance. Air was supplied through two separate inlets in the bow of the fuselage; This design feature was also found in the following series fighter aircraft from Mikoyan and Gurevich up to the MiG-19 . In order to be able to fight heavy bombers, three cannons (two with 23 mm and one with 37 mm or 57 mm) were provided in the bow as armament.

At the end of 1945 the first of three prototypes was ready and brought to the ZAGI for static tests . These showed that the rear fuselage had to be reinforced, which (to the annoyance of the government) delayed the first take-off. In March 1946, a converted prototype was brought to the flight test center in Ramenskoye, where the first static runs of the engine were carried out. It was found that the heat from the exhaust jet attacked the fuselage structure, which made it necessary to attach a heat shield. On April 24, 1946, the first prototype of the MiG-9, the F-1 , took off from the ground as the Soviet Union's first prototype jet alongside the Yak-15 (which made its maiden flight on the same day just a few hours later). The F-1 was powered by two BMW - 003 engines. The first flight was made by Alexei Grintschik. During the following test phase, serious changes were made to the machine, because on the one hand it tended to vibrate through the heat shield at high speeds and on the other hand it did not achieve the desired performance. Engineers realized that in order to reach high speeds near the sound barrier , they needed arrow-shaped wings. The swept wings became a characteristic feature of the later series-produced MiG-15 . Experience with the F-1 also showed that the performance of the two BMW engines was too low. But just like the German designers before, the Soviet designers did not succeed in increasing the power of the engines.

On July 11, 1946, the F-1 crashed in front of high-ranking officials, among them the Commander in Chief of the Air Force Konstantin Werschinin , during a comparison flight with the Jak-15 and a captured Heinkel He 162 . Grintschik was killed in the process. During the demonstration of the very maneuverable Jak-15, he had announced an equally impressive demonstration to one of the engineers of the OKB MiG. This warned Grintschik of the previously untested loads to be expected. During the demonstration by Grintschik, contrails appeared on the wing tips of the MiG-9 several times. Grintschik exposed the machine, which was largely untested with a total of only 6 hours and 23 minutes, to enormous stress. During the final horizontal flyby of the spectators, which Grintschik completed after vigorously escaping a curve at a height of 100 to 150 m at high speed, the machine rolled over the right wing in a supine position and hit the edge of the Schukowski airfield . Structural damage from the overloads in the last flight was identified as the cause. During the final level flight, at least one fastening bolt in the left wing broke, under the aerodynamic forces the wing was strongly bent at the root, the aileron blocked, a maintenance flap located on the leading edge in the wing root was dismantled due to the deformation of the wing and damaged ailerons and elevators . As a result, the machine lost its controllability and crashed. The following two prototypes were then equipped with reinforced flaps and oars. The completion of these two copies was under enormous time pressure. In August 1946, the flight tests with pilots Mark Gallai on the F-3 (first flight August 9th) and G. M. Schijanow, who had piloted the He 162 during the comparison flight , on the F-2 (first flight August 11th) were resumed . The short maiden flight of the F-3 then revealed some manufacturing defects. During assembly, the control cables for the elevator trim were swapped, which initially made it difficult for Gallai to control it. The nose landing gear did not withstand the energetic touchdown chosen by Gallai during the landing and broke due to a material defect. The MiG-9 then came to a halt on the stump of the landing gear without any major damage. After a thorough analysis of both machines, the F-2 took off on its maiden flight just two days later. During the testing of the variant MiG-9FF equipped with an afterburner, another test pilot, Viktor Massitsch, had a fatal accident on August 3, 1947.

Preparations for series production proceeded at an enormous pace under steadfast pressure from Stalin. Series production began in Kuibyshev in late summer 1946 and the first machine was completed on October 13, 1946. After more than 600 machines had been built, series production ended in 1948. Troop trials began in December 1946, and further deficiencies owed to the time pressure came to light. When all cannons were fired at the same time at an altitude of 7,000 meters, both engines failed. In addition, the lack of air brakes and an ejection seat were criticized.

In several follow-up projects, attempts were made to improve flight performance by installing more powerful engines, but ultimately the MiG-15, which was already being tested from the end of 1947, proved to be clearly superior, so these projects were discontinued. The MiG-9 was therefore only in service from 1947 to 1950, until it was replaced by its successful successor, the MiG-15. While the light Jak-15 functioned as a pure fighter aircraft, the heavier MiG-9 took over the task of the fighter-bomber.

The MiG-9 was a cantilever mid- wing aircraft in all-metal construction with a three-legged landing gear. The wings were trapezoidal in shape and had devices at the ends for attaching additional fuel tanks. The tail unit in normal construction was placed on a leaking beam, under which the outlet of the two RD-20 engines , a replica of the BMW-003A captured in Germany, was located. The operating time between the overhauls has been increased from 10 to 50 hours compared to the BMW 003. 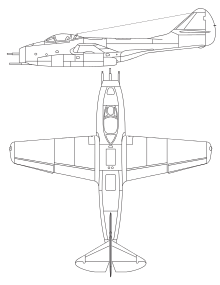 Two-sided view of the MiG-9

Name for the two prototypes of the two-seater school version, tested in 1946. With the FT-2, attempts were made with a catapult seat for the first time in the Soviet Union.

Name for the serial version of the two-seater school version. First flight April 4, 1947. A special version for testing catapult seats was called the MiG-9UTI-LL.

converted serial machine with 37 mm cannon on the left.

improved production version with RD-21 drives, cannons built into the fuselage (NS-23 left, N-37 right), ejection seat and pressurized cabin. With this variant, a conventional production model reached the Mach 0.8 limit for the first time. First flight in July 1947. Since the troop trials showed no significant improvements and the MiG-15 was already being planned, the project was discontinued.

Test run from autumn 1946 with a Ljulka TR-1 engine; not tested in flight.

Trial version for the KS-1 missile with two cockpits and two radars on the nose of the fuselage and on the tip of the tail unit. Trials from 1949 to 1953.

Another aircraft known as the MiG-9 was the Project I-210 . In this embodiment September 1941 were five in August / MiG-3 from current production tentatively with M-82A - radial engines equipped. They were also known as MiG-3M-82 or ICh . The construction took place under difficult conditions at Kuibyshev. On January 2, 1942, an I-210 flew for the first time. The flight tests showed poor flight performance and strong vibrations. Because of this and other errors, the test was canceled. In 1942/1943 a further development followed under the designation I-211 .