The bog birch ( Betula pubescens ), also called hair birch , broom birch , glass birch or hairy birch , is a species of the birch family (Betulaceae). It is a characteristic tree ( phanerophyte ) of the bog and swamp forests as well as drier areas in rain bog complexes . As a pioneer tree species , it is able to quickly colonize newly created habitats .

The downy birch grows as a deciduous tree or shrub, i.e. a deciduous tree or shrub, with one or more trunks, and can reach heights of up to 30 meters. Single copies can be around 120 years old. The bark is initially dark reddish-brown, later light reddish-brown to tan or brown and finally greyish-white; it is smooth and not fielded in diamond-shaped panels like that of the silver birch and peeled off later in paper-thin panels. The bark of the stiffly upright or horizontally protruding branches is initially downy hairy, later reddish brown. The horizontal lenticels are initially light, later they enlarge and become dark. The terminal buds of the bog birch are pointed ovoid and slightly curved. The bud scales are gray to gray-brown or greenish-gray. They are rounded at the end and ciliate white on the edges.

Young leaves smell aromatic and are also downy hairy, especially along the leaf veins . The alternate leaves are arranged in a petiole and a leaf blade. The egg-shaped or rhombic-egg-shaped, heart-shaped leaf blade is 3 to 5 inches long and doubly serrate.

Like all birches, the bog birch is single-sexed ( monoecious ). The male inflorescences (catkins) are elongated, cylindrical. The female inflorescences are about 2 to 4 inches long, cylindrical, later drooping. The middle lobes of the three-lobed fruit scales are clearly drawn out and protrude beyond the upwardly curved side lobes. The approximately 3 millimeter large seeds ( nuts or nuts) are broadly winged for better spreading by the wind. One kitten contains around 450 seeds. The bog birch blooms from April to May and the fruits ripen from August.

The bog birch occurs in the temperate climatic zones of Europe and Asia from Iceland via Scandinavia , Russia to the east to the Yenisei region and south to northern Italy and the Balkan region to the Caucasus . Downy birches form the subarctic tree line north of the boreal coniferous forests (taiga) . Their elevation ranges from the lowlands (Kollin) to the tree line (subalpine). In the Alpine region, birch trees rise to around 2000 meters above sea level. In the Allgäu Alps, the bog birch rises up to 1700 meters above sea level.

It settles damp to waterlogged, lime-free, low to moderate base supplied , acidic peat and Anmoorböden (to about pH  <5) with low to very low supply of nutrients ( oligotrophic to mesotrophic ). It grows in bog and swamp forests in the mountains as well as in drained rain bogs and on the slopes of intact raised bogs. In their centers, however, due to the poor supply of nutrients, it usually only develops a shrub-like habit. It also grows in fens , floodplain forests and damp hedges . In foggy and rainy climates, it can also exist in drier locations. The propagation biology of the bog birch is specifically geared towards the primary stages of a succession . Only in Scandinavia and the tundras of Northern Europe and on special locations such as moors does it form natural climax societies . 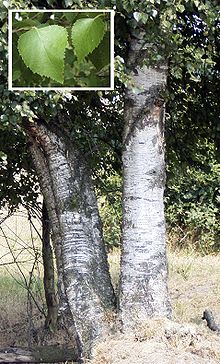 The downy birch is a characteristic species of the downy birch and pine-spruce break forests (Molinio-Betuletalia pubescentis). These swamp forests are often rich in berry bushes such as bog berries ( Vaccinium uliginosum ) and peat mosses such as swamp peat moss ( Sphagnum palustre ) and fringed peat moss ( Sphagnum fimbriatum ). The forests are mostly sparse, sparse and species-poor. The downy birch also forms species-poor secondary "moor forests" on drained raised bog locations, mostly with the cotton grass and peat moss in the herb and moss layer . Furthermore, the bog birch grows in deciduous forests and bushes in damp to drier locations together with the silver birch ( Betula pendula ), the ash ( Fraxinus excelsior ), the rowanberry ( Sorbus aucuparia ) and the quivering aspen ( Populus tremula ).

The bog birch is a type of light wood, which means that it grows preferentially in full light, but can tolerate shading within limits. Their ecological focus is on well-humid to often soaked, air-poor, acidic to very acidic soils. It is also a pioneer tree species.

The downy birch as a pioneer wood, eight years after a fire in a broken pine forest.

Their reproductive biology is specifically geared towards the conditions of propagation on raw soil and open spaces. Characteristic is their high seed production, which contributes to the rapid settlement of bald areas. A free-standing, old bog birch produces up to four kilograms of seeds. If these were placed next to each other, a distance of 60 kilometers or an area of ​​180 square meters would result. The seed density in nature can be up to 50,000 pieces per square meter. There are approximately five million pollen grains in a male kitten. The pollen can fly up to 2,000 kilometers.

The birch's unpretentious nature with regard to the supply of nutrients and its rapid growth make it a pioneer plant , which quickly colonizes suitable light-favored areas such as clearcuts , clearings and burned areas . Especially in bogs, where other woody plants do not find suitable growing conditions due to the high acid content of the bog soils , it has a competitive advantage and can form bushes with few species. It is even less demanding than the silver birch ( Betula pendula ), which is also a pioneer in many areas.

Bog birches are insensitive to winter frosts. At temperatures below −40 ° C they convert starch into oil in the twigs , releasing heat. The leaves only freeze to death from −6 ° C. When it is cold, the ventilation cracks ("cork warts") that appear in the area of ​​the white bark are closed and thus increase the frost resistance. The downy birch is considered the northernmost tree species in Europe. A winter temperature of -33 ° C on average does not cause any loss of vitality. The frost hardness remains stable throughout the winter despite the intermittent warming (up to +18 ° C).

In Northern Europe, the white coloring effect of the bark ingredient betulin protects the thin bark from bark burn . Due to the low sun in spring and the reflection from snow surfaces, dark bark would overheat and the cell division tissue would be damaged.

The downy birch has a flat-rooted heart- root system . Strongly developed horizontal roots are missing; Instead of one main root, several vertically growing roots of different strengths are formed on the rhizome with several side roots up to 20 meters long. Shallow-rooters are primarily geared towards absorbing seeping rainwater. The downy birch has a high water flow rate. A fully grown birch tree can draw up to 500 liters of water from the ground on a hot summer day. The fine roots are surrounded by a dense network of symbiotic fungi ( mycorrhiza ), which greatly favors the supply of nutrients.

The bog birch plays a decisive role for many phytophagous insects. For example, some species of cicadas only suckle (2nd degree monophag) on ​​both downy birch and silver birch. These are mainly species of the genus Oncopsis within the family of masked cicadas (Macropsinae).

The Carpathian birch is the dominant tree species in the birch bog forest , which is part of the habitat type 91D0 * protected by the Fauna-Flora-Habitat Directive .

In the boreal north of Europe, the mountain birch forms its own forest belt. The variable and taxonomically elusive plant family used to be mostly Betula pubescens subsp. tortuosa (Ledeb.) called Nyman , this name is only used today for a clan widespread in the Altai . The most used name of the clan is Betula pubescens Ehrh. subsp. czerepanovii (NIOrlova) Hämet-Ahti . It is then considered a subspecies of the downy birch ( Betula pubescens ). The Fjell birch differs from the typical subspecies of the downy birch in various features (e.g. leaf shape), the mostly crooked, twisted trunks and the often multi-stemmed growth are striking. The origin of the mountain birch is now mostly interpreted as an introgressive hybridization with the dwarf birch ( Betula nana ). Primary hybrids are triploid and rarely occur. Backcrossing with bog birch creates diverse hybrid swarms, in which the silver birch also participates as a partner . This mechanism (which is quite widespread in the plant kingdom) can be used to cross characteristics of the dwarf birch into bog birch populations and thus explain the diverse, ecologically plastic Nordic populations .

In the north, the fell birch forms its own forest belt and various natural forest communities (overview in). In Scandinavia they form the natural tree line , which in central Norway is at altitudes of around 1,200 meters and near the coast at around 600 meters. It is the only forest-forming tree species in Iceland . To the east, under more continental climatic influence, the mountain birch forests are replaced by conifer forests. Mountain birch forests, especially in their lichen-rich formation, are important grazing grounds for the reindeer herds of the Sami people . For some time, an advance of the forests northwards and uphill has been registered, which can amount to a few hundred meters in altitude. This can convincingly be interpreted as the effect of climate change, so that these previously often still primeval forest-like, economically inferior stocks are now also subject to increased human influence.

Finds of this subspecies are also reported from the Alps. The actual status of these populations and their relationship to the Nordic Fjell Birch still require clarification.

Some of the birch wood is almost white and has no grain. It can be smoothed very well, which is why it is a popular wood for furniture construction. It is only used indoors, as it decomposes very quickly under putrefactive conditions. Birch wood is the only wood that burns when it is damp, which is why it is a very popular firewood. The firewood should be split to dry as the bark is impermeable to water.

The leaves of the downy birch as well as the silver birch contain up to three percent flavonoids, in particular hyperoside , quercetin , quercitrin and myricetingalactoside , but also vitamin C , saponins and essential oils . The birch buds contain fat-soluble flavone methyl ether . Teas and pressed juices made from birch leaves cause increased salt and water excretion. They are therefore used for flushing therapy of the kidneys, for inflammation of the lower urinary tract and kidney gravel . Birch leaves are traditionally used because of their uric acid lowering effect in gout and rheumatic complaints or as an additive to so-called blood cleansing teas . The very young, fresh leaves can be eaten in spring salads. Hair lotions made from birch leaf extracts are said to work against hair loss and dandruff.

Preferred uses in the wood industry are veneers in furniture construction and interior design. Also for imitating precious woods such as walnut and cherry for period furniture . The wood is also used for turning and carving work, as well as for sports equipment, musical instruments, brush and brush handles and as industrial wood for chipboard and fiberboard. In Scandinavia it is of great importance for plywood panels .