The Mecklenbruch is a high moor in the mostly wooded low mountain range of Solling . It is located near Silberborn in the Lower Saxony district of Holzminden (Germany) and was designated as a nature reserve.

The Mecklenbruch spreads in the Hochsolling , the highest part of the Solling, to about 431 to 465  m above sea level. NHN height. It is located in the city of Holzminden about half a straight line between Boffzen and Dassel north of Silberborn . To the northeast of the landscape falls towards Hein vein hamlet Hellental from. The mountains in the area include the Vogelherd (approx.  507  m ) in the north, the Große Ahrensberg ( 524.9  m ) in the north-northeast, the Große Pare ( 527.8  m ) in the east and the Dasseler Mittelberg ( 507.3  m ) in the southeast .

During the last ice age , the sedimentation of weathered sandstone, which was mixed with loess , formed water-impermeable soil. About 4500 years ago, peat mosses formed small mounds that gradually grew together. A five-meter-thick layer of peat was created in the center . The Mecklenbruch became the largest raised bog in the mountainous region of Lower Saxony outside of the Harz Mountains to this day . The name is said to have originated from the old Saxon "mikil" for "large", which means "large break". It was first mentioned in documents in 1575 as "Mekelenbroik".

As early as 1799, the peat was mined for 40 years as fuel for a glassworks built there. Even after the world wars, peat was extracted. Specially constructed narrow canals drained the moor. A nature conservation idea that had arisen in 1939 was not taken up until 1979 in a new ordinance. In 1981 the moor began to be renatured . The technical measures for raising the water level as a basic requirement for bog formation were completed in 2010. In the process, ditches were dammed for rewetting and some spruce and bog birch trees , which need a lot of water, were removed, so that these only occur at the edge zones today.

Today the peat moss is gradually returning, which is evidence of the improved species composition that is now typical of the site. It is estimated, however, that many decades will pass before they can hold the water again over a large area and the peat regeneration is completed with the onset of peat formation. 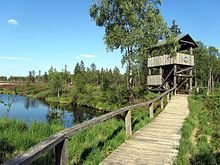 Many hiking trails in the Solling-Vogler Nature Park lead through the Hochsolling and thus to the moorland, which can be explored on wooden footbridges . There is a nature trail that shows the history of the moor and interesting facts about flora and fauna .

Sights in the moor area include the Hochsollingturm and the Neuhaus wildlife park (with forest museum).