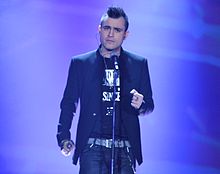 His mother, a music teacher, is Slovenian, his father is a dentist and comes from Jordan . Omar Naber is a trained dental technician and has been making music since the age of 16. Today he is active both solo and with his band Kareem .

Encouraged by Matjaž Vlasic from the record company Nika Records , he took on Slovenian television at the talent show Bitka talentov ( "Battle of talents") and won them.

Associated with the victory was participation in the Slovenian preliminary decision for the Eurovision Song Contest 2005 . With almost 30,000 votes from a total of 14 participants, he was just able to win the telephone vote in the preliminary round. As a result, Naber entered the qualifying round of the Eurovision Song Contest in Kiev in May 2005 with the self-composed song Stop , but could not qualify for the final.

Naber plays the piano and guitar, he also composes and writes some songs himself. In his home country and partly abroad he is considered a teenage idol, although his CDs are practically only available in Slovenia.

In 2009 and 2014 he again took part in the Slovenian preliminary decision for the Eurovision Song Contest . In 2017 he also appeared in the preliminary round and won it with the song On My Way . Thus he represented Slovenia at the Eurovision Song Contest in Kiev . After participating in the first semifinals, however, he was unable to qualify for the final of the competition again.

Slovenia at the Eurovision Song Contest