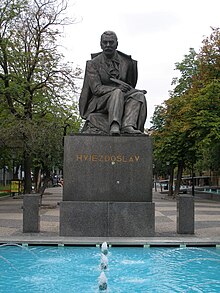 Hviezdoslav was a realist (initially influenced by the Romantics ) who enriched Slovak literature with new forms and newly coined Slovak words. He wrote lyrical and epic poems, dealt with biblical material and themes from the life of the Slovak people in dramas and verses, and also translated the works of prominent German, English, Russian, French, Hungarian and Polish poets ( Johann Wolfgang von Goethe , William Shakespeare , Alexander Sergejewitsch Pushkin etc.) into the Slovak language . His main work is the epic verse epic Hájnikova žena (1886). Hviezdoslav was well known in Slovak and Czech circles during his lifetime. His work has not yet been translated into German, which is likely to be a major linguistic challenge due to its numerous new formations and word games.

He was born in Vyšný Kubín in northern central Slovakia (at that time part of the Kingdom of Hungary ) into a peasant family (from the class of the country nobles, Junkers) and attended his elementary school there. His parents raised him to respect work. Then he lived with various relatives, u. a. 1862 to 1865 with his childless uncle in Miskolc . In Miskolc he attended three high school classes and got to know the works of the great Hungarian poets Sándor Petőfi and János Arany . After the death of his uncle (1865) he attended the high school in Käsmark in the Zips until 1870 .

Even at the quinta he wrote poems in Hungarian and then in German . His teacher then called him a young Goethe in this regard . Soon after, however, he began to write in the Slovak language . In 1868, when he was still at high school, his first collection of Slovak poems appeared, which he dedicated to the Slovak poet Andrej Sládkovič , who, according to his own account, inspired him to write. In 1870 he graduated from high school and in the same year went to the Law Academy in Eperies .

In 1872, after completing his studies in Dolný Kubín, he initially worked as a legal assistant and in 1874 as a court trainee. Since he publicly opposed the closure of the only Slovak-speaking grammar schools carried out by the Hungarian authorities and therefore threatened to quit, he went to Budapest , passed his bar exam there in 1875 and then worked as a lawyer in the Orava countryside in northern Slovakia in the city Námestovo (until 1899). Most of his works date from his time in Námestovo. He worked on the then only Slovak literary monthly "Orol" ("Adler", 1870-1880) with.

In 1876 he returned to the court in Dolný Kubín and married Ilona Nováková there in May. The marriage remained childless. From 1879 - for over 20 years - he worked again in Námestovo as an independent lawyer. During these years he intensified his writing activity increasingly. In 1877 he began using the pseudonym Hviezdoslav (a compound from the Slovak words "hviezda" - "star" and "sláva" - "fame", where -slav is also the ending of numerous Slavic names). In 1881 he was one of the most important employees of the Slovak literary magazine "Slovenské pohl'ady".

In the years 1887-1889 he was struck by a series of tragedies in his family, as his mother, father and brother (whose children he then adopted) gradually died. In 1899 he intended to gain a professional foothold in Dolný Kubín (instead of Námestovo), but this failed, so that he finally gave up his legal practice in 1902. In 1912 he was appointed a corresponding member of the Hungarian Kisfaludy Society for his translations of Hungarian poets and in 1913 a corresponding member of the Czech Academy of Sciences and Arts in Prague. 1918–1920 he was a member (from 1919 deputy) of the provisional parliament of the newly established Czechoslovakia . He died of a serious illness at the age of 72 in Dolný Kubín.

Hviezdoslav translated the poems of Johann Wolfgang Goethe , Friedrich Schiller , Adam Mickiewicz , Imre Madách , János Arany , Sándor Petőfi , Victor Hugo , Alexander Puschkin and Michail Lermontow . Of these, Hviezdoslav admired Shakespeare the most, so that Shakespeare also had the greatest influence on him. The reason for his frequent translations was to prove that any works of world literature can be translated into the Slovak language (then relatively recently codified and largely officially banned until 1918) .

In various Slovak cities, squares or streets were named after the poet; the most famous is the promenade-like square in the capital Bratislava . There is also a parish called Hviezdoslavov ( Okres Dunajská Streda ). In 1954 a museum was founded in the place where Dolný Kubín died; since 1955 the Hviezdoslavov Kubín recitation competition has been held annually. The last Czechoslovakian banknote for 10 kroner bore his portrait.