The Police United was a Thai football club from Bangkok . The police was a factory team of the Thai police, which is also the main financier of the club. The club played last season in the second division, the Thai Premier League Division 1 .

The police sports club was founded in 1960. In 1965 the club celebrated its first and only championship. After that, the police officers' club fell silent. The last few years of the club's history cannot exactly be described as successful. In the last 10 years, the club has had 3 relegations and 2 promotions. The last promotion to the Thailand Premier League, 2006, was followed again in 2007 by direct relegation. In the following year, 2008, they missed direct resurgence by just 4 points and finished fourth at the end of the season. Before the 2009 season, however, the club renamed itself from FC Royal Thai Police to Police United. This happened because of the new requirements on the part of the Thailand Premier League and the AFC , which stipulate that clubs act as companies and must also be registered as such.

The 2009 second division season was dominated by Police United from the start. With 65 points from 30 games, the third promotion to the TPL could be made perfectly. The team scored a total of 76 goals. Manit Noyendung , the club's top striker, scored 24 goals. After the end of the season, the team received a number of awards. Chaiyong Kumpiam was named coach of the year, Sompong Yod-art was named goalkeeper of the year and Manit Noyendung was named striker of the year. For the 2010 season, the Police was able to sign two high-quality players. In midfield they strengthened themselves with the experienced Narongchai Vachiraban and in attack with Nantawat Thaensopa . The latter was the 2008 AFC Champions League top scorer . Another striker was added with Goran Zoric . Zoric is the first Australian in the Thai Premier League.

In January 2010 the club signed a contract with Insee. For the amount of 60 million baht , over a period of three years, the club nicknamed itself Insee. The club’s official name has been Insee Police United . The stadium was changed again for the 2010 season. The club's new home is now the Thammasat Stadium in Pathum Thani Province , north of Bangkok .

The home games of the last season in 2015 were played at the Boonyachinda Stadium ( Thai สนาม บุ ณ ยะ จินดา ) in the Lak Si district of the Thai capital Bangkok . The stadium is a multi-purpose stadium. The stadium has a capacity of 3550 people. The owner and operator is the Royal Thai Police. 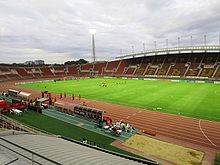